Fonda died of respiratory failure due to lung cancer at his Los Angeles home, his family said in a statement Friday. "It is with deep sorrow that we share the news that Peter Fonda has passed away," the family said. "… In one of the saddest moments of our lives, we are not able to find the appropriate words to express the pain in our hearts."As the son of actor Henry Fonda and the brother of actress and activist Jane Fonda, he was a member of the Hollywood powerhouse family. His daughter is actress Bridget Fonda. In a statement, Jane Fonda said she spent her younger brother's final days with him. "I am very sad. He was my sweet-hearted baby brother. The talker of the family. I have had beautiful alone time with him these last days. He went out laughing," she said. Fonda broke out as a star with his turn in the 1969 blockbuster "Easy Rider," which marked its 50th anniversary this year. The film also starred Jack Nicholson and Dennis Hopper. 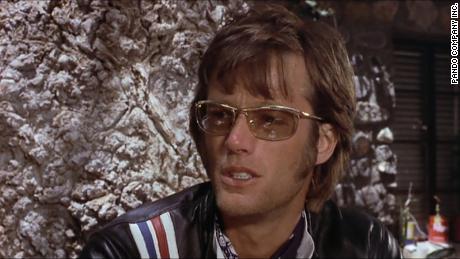 Film critic Roger Ebert called the film "one of the rallying-points of the late '60s," saying it was a buddy picture that celebrated "sex, drugs, rock 'n' roll, and the freedom of the open road." "It did a lot of repeat business while the sweet smell of pot drifted through theaters," Ebert wrote of the film in 2004. Fonda was nominated for an Academy Award for the screenplay, a nomination he shared with Hopper. "I never stopped working, thanks to 'Easy Rider,' " Fonda told The Los Angeles Times in 2007.His last tweet on August 9 referenced the film: "Easy Rider' at 50: How they put together that groundbreaking soundtrack." The family asked for privacy to grieve, but said they wished for people to "celebrate his indomitable spirit and love of life" 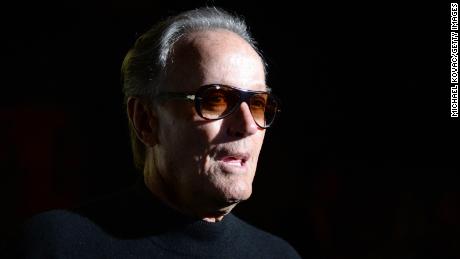 "In honor of Peter, please raise a glass to freedom," the family said. Freedom was a word Fonda often invoked. "I believe that one is only truly free when one is learning, and one can only learn when one is free. Freedom is NOT just another word for 'nothing left to lose,'" Fonda said on his website. Directors, writers, actors and fans took to social media to mourn Fonda."RIP Peter Fonda, counter culture legend, groundbreaking actor and all around real life hero, Edgar Wright, who wrote and directed "Baby Driver" said on Twitter. Ava DuVernay, who directed "Selma," reposted a photo she took with Fonda at a dinner: "Our photo theme was 'crazy', but my takeaway from dinner seated next to the legendary @IAmFonda was 'kind' and 'wise.'""Rest in Peace, Kind Sir," she wrote. "Director Rob Reiner called Fonda a "revolutionary filmmaker during a revolutionary time." "My heart goes out to Jane," he said via Twitter. For actress and writer Illeana Douglas, "EASY RIDER depicted the rise of hippie culture, condemned the establishment, and celebrated freedom." "Peter Fonda embodied those values and instilled them in a generation. Independent cinema begins with EASY RIDER. Period," she said on Twitter.

His career was defined by 'Easy Rider'

Born Peter Henry Fonda in New York on February 23, 1940, he started his career on Broadway in 1961 in "Blood, Sweat and Stanley Poole," according to Playbill. He directed his first film, "The Hired Hand," in 1971. He also starred in the critically acclaimed western, which was restored and premiered at the 2001 Venice Film Festival.In 1998, at age 57, Fonda was nominated for a best actor Academy Award for his turn as a beekeeper trying to hold his family together in the indie film "Ulee's Gold." The New York Times said of his performance, "It would be accurate but barely adequate to call this the finest work of Fonda's career."He went on to star in a number of films, including "The Limey" and "Ocean' Twelve, and television shows, though he never achieved the success of his father. But his career would forever be defined by his turn as Wyatt, with his stars-and-stripes helmet astride his motorcycle, "Captain America," in "Easy Rider," a rough-hewn character that often times reflected his personal life. Fonda&Read More – Source

admin - November 13, 2018
0
The event has just been upgraded from a G1 to a G2 class geomagnetic storm and could mess with space..

The Legend Of Zelda Breath Of The Wild 2: 7 Features...

HBO’s response to Trump’s ‘Game of Thrones’ reference is both icy...

admin - November 4, 2018
0
On Friday, Trump posted to his social media account a photo of himself with the words: "Sanctions ar..