The funeral for the "Queen of Soul," who died August 16 at the age of 76 after a battle with pancreatic cancer, will take place at Detroit's Greater Grace Temple.Aretha Franklin's funeral: Live updatesOn Friday morning, Franklin's open casket was placed at the front of the church as mourners streamed by in advance of the service. Projected on the walls were the words "A Celebration Fit for the Queen."Franklin's body was dressed all in gold.In the church lobby, floral arrangements from some of Franklin's best-known friends, including Tony Bennett, Barbra Streisand and Diana Ross, greeted attendees.The service will touch on Franklin's significance to her friends, family and fans, organizers told CNN. There are musical tributes planned from several artists, including Stevie Wonder, Faith Hill, Ariana Grande, Jennifer Hudson, Fantasia and Jennifer Holliday.Scheduled remarks from former President Bill Clinton, Detroit Mayor Mike Duggan, Michigan Gov. Rick Snyder and the Rev. Jesse Jackson signify Franklin's political and social influence. She stood on the front lines of the civil rights movement, where her music served as a frequent anthem.The presence of Hollywood stars such as Tyler Perry and Cicely Tyson, who will also speak, are a nod to Franklin's contributions on screen and off in films such as "The Blues Brothers."Remarks from her grandchildren and an obituary reading by her niece Sabrina Owens are plannedOwens told CNN the funeral service will pay homage to Franklin's gospel roots and her love of the church."We knew we wanted to have certain gospel artists like the Williams Brothers and Pastor Shirley Caesar," Owens said. "And there were other people who called us wanting to participate."Her family wanted to keep the funeral service private to those closest to Franklin — though it will be streamed and portions broadcast by major networks — but worked to provide the singer's many fans an extended opportunity to say goodbye this week, Owens said.Viewings earlier this week at the Charles H. Wright Museum of African American History and at Franklin's childhood parish, New Bethel Baptist Church, as well as an all-star tribute concert Thursday night, were all planned with the public in mind. 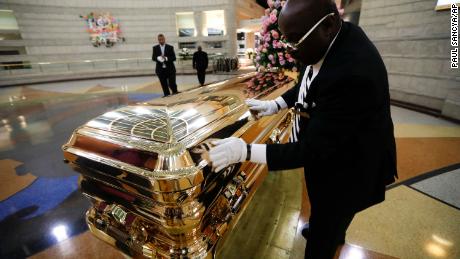 Aretha Franklin comes home to New Bethel Baptist ChurchFriday's service, however, will feature those who knew and loved Franklin most, such as her childhood friend, singer Smokey Robinson, who talked to CNN soon after Franklin died about their life-long friendship."Aretha was my baby," Robinson said. "We were just cool all of our lives, and we stayed in contact, and we talked all the time up until she was no longer able to do that a few weeks ago."Owens said Franklin loved fiercely and was the family's matriarch."We really haven't had much of an opportunity to have private moments," Owens said. "I know the world lost the 'Queen,' but her sons lost their mother, her nieces and nephews lost their aunt. … We lost a family member and we haven't had a chance to come together as a group to truly realize that we have lost one who loved us so much and was so loyal to us."Owens added, "It's going to be very difficult after all this is over and people have all gone away."

‘Flames raced towards us’ – Fleeing the California wildfires

GAMES WARNING: Your PS4, Xbox and Switch games could get A LOT more expensive...

Terrifying trailer for Scary Stories to Tell in the Dark will...

admin - April 22, 2018
0
No cause of death was immediately released. Troyer was hospitalized earlier this month after emergen..