In an online message, Millcreek Township School District Superintendent William Hall said the bats "could be used as a tool against an active shooter just like any other item in the immediate room," adding that they will remain locked in the classroom and "are only to be used/available in a hard lockdown situation."On social media, however, the idea is being roundly mocked."Congratulations your district is now the laughing stock of the entire country!" wrote a commenter on the district's Facebook page. "What's a teacher gonna do, use their mini baseball bat like a light saber to deflect bullets back at a potential gunman???""Pennsylvania school district wants teachers to bring little clubs to a gunfight," said another man on Twitter. "The Millcreek Township superintendent must be the stupidest man on the face of the Earth."The move comes as school districts across the country weigh new security measures — including possibly arming teachers with guns — in the wake of the February 14 shooting at Marjory Stoneman Douglas High School, where 17 people died.Millcreek Township schools issued the new security plan on April 2, along with training for staffers on how to respond to an active shooter situation. The plan is called T.R.O.J.A.N., which stands for "threat assessment, run, obstruct and barricade, join forces, attack, and never give up."But all anyone seems to be talking about is the bats.Hall told CNN affiliate WSEE on Tuesday that the 16-inch bats, which look like a souvenir sold at a baseball game, cost the district about $1,800.After a flurry of media coverage, Hall posted an updated message Thursday in which he explained the bats were mostly intended to be symbolic — a reminder that in the event of a shooting, teachers might have to fight. School district arms students with rocks"They were distributed to our teaching staff as a symbolic reminder of the district's change in its current response from shelter in place (hide) to now include the options of running and/or fighting back," he said."It is not the primary deterrent, but rather it is something that may be used in an emergency situation, and symbolizes our intent to take an active approach to defending our students and staff under threat." 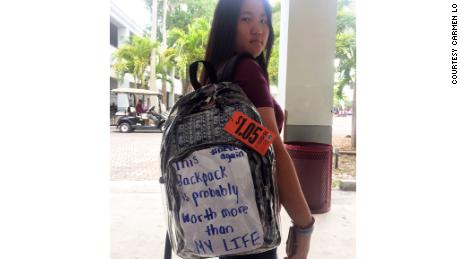 CNN reached out to the office of the superintendent for additional comment and was directed to Hall's statement, posted on the district's website. Jon Cacchione, president of the local teachers' union, told WSEE he supports the decision to arm teachers with bats."This is a tool to have in the event we have nothing else," he said. "Part of the formula now is to fight back.""The theory behind the attack option is to create noise, distract, or defend against an active shooter. For a classroom or office setting, this translates to books, staplers, chairs, fire extinguishers, etc. being used as defensible tools," Hall added in his Thursday statement."We hope the day will never come that our staff will have to defend students and themselves. However, we want our staff to know that in a life and death situation, an attack option may be necessary."The school district also has implemented other security measures such as securing entrances and purchasing Stop the Bleed kits for all classrooms.

Protecting the rights of minorities in Iraq

Melania Introduces Trump For Mothers Day Speech — He Steps To...