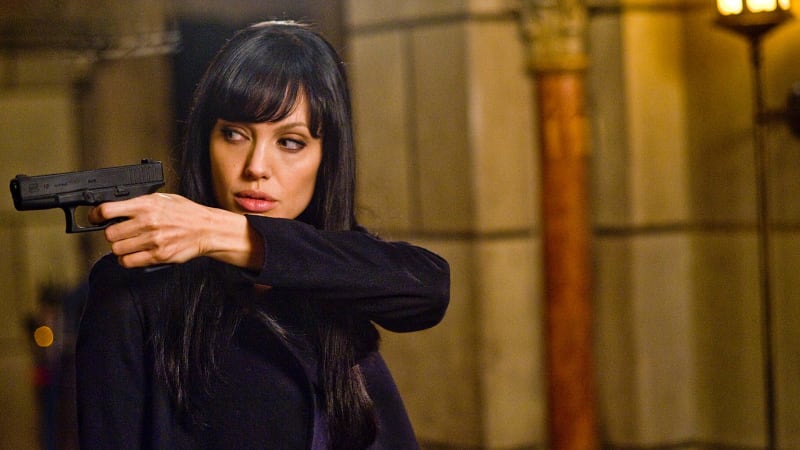 When she made this, Jolie had clocked up another 10 years on the speedo since she starred as the hyper-active Lara Croft but at 35 she's in pretty good trim. And she needs to be, in a cavalcade of chase sequences that begins when her CIA controllers learn from a Russian mole that a "sleeper" agent is about to be activated to initiate a devastating assassination likely to throw what is laughingly called the free world into a tailspin.

Who is this mysterious agent? Why, none other than Evelyn herself! But by jingo she's not about to have her reputation as a red-blooded, true-grit patriot sullied by the devious Commos or delusional CIA brethren so she cogs into ramming speed to clear her name and foil the plot.

The film strives womanfully to accentuate fears currently being fanned that a neo Cold War is gaining momentum thanks to the machinations of the vile Mr Putin and his evil cabal of kleptogarchs. It's totally preposterous, but with American military and diplomatic policy in a constantly heightened state of absurdity, not as far-fetched as we might suppose.

And with Hollywood's actresses standing firm against rampant sexism, it's apt that Jolie takes on tasks usually assigned to Bruce, 007, Jason Bourne and Tom Terrific.

Word has it that the role was originally envisaged for Mr Cruise and, in an endearing tribute to the little Scientologist, Evelyn appears in one scene in drag, disguised as a nuggety chap with some semblance of L. Ron Hubbard's illustrious disciple.

Bless you, Evelyn, for your parkour athleticism, your Dash Lola Dash determination, and your ingenuity in fashioning an RPG from bits and pieces. Angus MacGyver and his Phoenix Foundation cohort would be impressed.

And bless you, Evelyn, for resisting the predations of North Korean torturers administering a high-octane cocktail orally via a length of garden hose.

Phil Noyce has resisted no temptation in making this film so stratospherically over the top that it stands as a classic example of contemporary megaplex fare. And, given you can enjoy it and watch Ralph Richardson drag us into the jet-propulsion era, why waste energy resisting?

Protests after girl, 7, dies in US border custody

Has Seungri escaped K-pop storm? Reports say he has been called up for military...

Indoor playgrounds back in business: Best deals for families during Covid-19

Lindsey Graham Snaps Back At Dem Colleague Who Said Men Should...