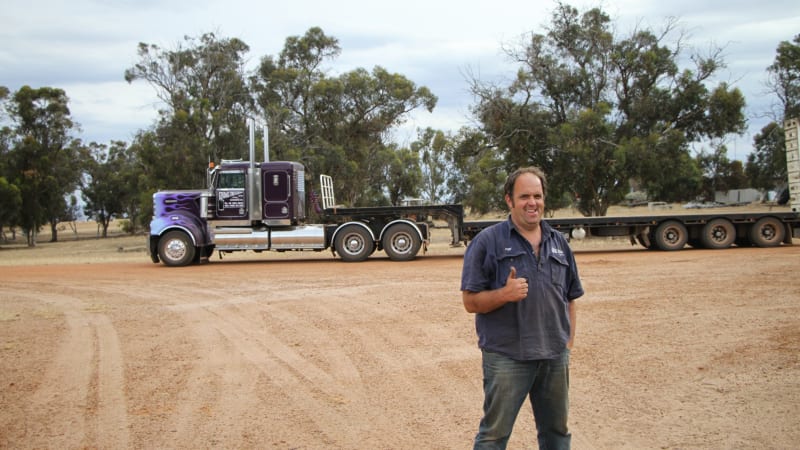 Dinky do or die, the semi-trailer drivers in this on-the-road documentary series provide an Australian perspective to an internationally popular concept that's previously produced Ice Road Truckers, MegaTruckers, and World's Toughest Trucker. The genre requires difficult and/or dangerous journeys – each repeatedly recapped– the most interesting of which in this episode is a dash through the north of Western Australia by married couple Nick and Jo to deliver a generator to a family before the wet season blocks roads for several months. As reality show talent goes, these veteran drivers are genial hosts, particularly the loquacious Yogi, even if most of his drama stems from earlier enforcement incidents he recounts because they weren't filmed. Nearly wiping out is a staple of the series, although there's no discussion of the economics behind these small businesses and how the biggest risk to independent driver/owners like these is often financial. CM

An affecting feature-length instalment of the series in which Americans dying of obesity get a last chance at life through the intervention of Texas surgeon Jonathan Nowzaradan. Tonight's patients are Missouri couple Rena and Lee, who weigh 249 kilograms and 324 kilograms respectively. It's shocking to see the pain and near-immobility in which they live – Rena is on oxygen constantly and out of breath by the time she finishes washing Lee in the shower – and to see the horrendously unhealthy food on which they gorge. But people don't just get like this for no reason, and Rena and Lee are soon revealing the terrible childhood traumas that took them down this path. We soon see that their own unhealthy relationship dynamic makes things even tougher. My 600lb Life does look exploitative, but it shows that there's hope for even the fattest people, and that makes it a thing of great value. BN

Changing a society merely starts with amending the laws, as Rupert Everett discovers in this cheery but thoughtful British documentary which was produced to mark the 50th anniversary of gay sex being decriminalised in England and Wales. The actor, who has previously said that acknowledging his own sexuality in the 1990s hurt his career in Hollywood, meets confident young LGBT people, dons a hard-hat to visit a gay builder, and revisits the underground gay scene of his own youth in London. The reach is kaleidoscopic, but it reveals an often painful push for equality, even if Everett the guide often plays the part of an impeccable devil's advocate who ponders whether bringing a subculture into the mainstream robbed it of creative energy. There are areas where change has been slow – the Jamaican community and the City of London – but Everett emphasises the optimistic. CM

Weekend Hot Topic, part 1: What TV show or movie should be made into...

Amazon says 2020 shopping season has been their biggest ever with big Black Friday,...

We Have Another Kim K Photoshop Controversy On Our Hands [PHOTOS]

See who won at the BET Awards

Ja Rule wants to do another Fyre Fest because it was...

admin - October 8, 2019
0
Fyre Fest might have been the worst festival of all time, but Ja Rule would do it again (Picture: Ne..