Reinking told technicians that his computer had been acting up and the USB port wasn't working, so the technician reformatted his hard drive — a common troubleshooting measure — which wiped the data from Reinking's hard drive, Dang It Repairs owner Robert Hartline told CNN.It's common for customers to come in complaining their machine has been hacked, he said. Reinking dropped off the device March 19 and picked it up the next day, Hartline said. At no point did Reinking ask that the computer be wiped, he said. "He's very smart. He knows a lot about computers. He tried to do the same troubleshooting our technicians would do," Hartline said of the suspected shooter. "He knew it very well. He's no dummy."Asked if authorities might be able to retrieve any of the erased data, Hartline said the FBI has means of seeing the remnants of scrubbed data. "There might be stuff they could get off there," he said. Hartline said that nothing about Reinking's behavior was unusual on March 19 or 20, but on April 11, about a week and a half before the Antioch shooting, his shop received a bizarre call from the 29-year-old. "Sorry, are you wanting to make a backup disk? Or …" a technician asks, according to a recording of the phone call. Reinking interrupts him saying, "You know what I'm talking about."The technician tells Reinking that he doesn't understand. "No, uh, yeah, that's what I'm saying, if I made a backup disk and kept that for later and had somebody analyze it they are not going to find anything on it that you guys put there, are they?" Reinking asks the technician. "Why are you guys doing this man? I don't get it, why… what are you getting out of this?""I'm not sure I understand the question," the technician replies.Reinking calls the technician a liar. "If you'd like to bring the device by, we'd be happy to take a look at it for you," the technician offers."Yeah, well, go kill yourself then, jump off a bridge or something," Reinking says before hanging up. 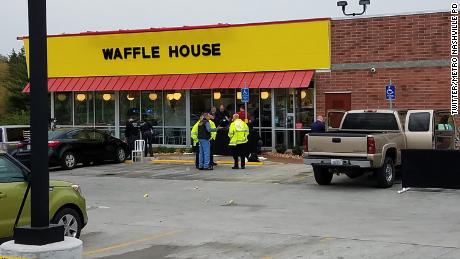 Hartline said that if Reinking had said something more threatening — such as, "I'm going to kill you" — he would've taken it more seriously. Instead, he just felt Reinking was being a jerk. Since the shooting, Hartline has passed along the recording of the conversation to Nashville police. He said he hasn't been contacted by the FBI. "They may have reached out to the store, but I'm a hard guy to get a hold of," he said. Reinking has been charged with four counts of criminal homicide in connection with Sunday's shooting. He is also facing four counts of attempted murder and one count of unlawful gun possession in the commission of a violent felony. A massive manhunt was launched after Reinking fled the restaurant naked. He was taken into custody about 35 hours later, when a woman at a construction site in Antioch spotted him in the woods.Correction: This story and headline have been updated to correct the reason Reinking initially visited the store. The store owner tells CNN that Reinking brought the computer in because he thought it had been hacked, not to have the hard drive wiped clean.

A GM strike could come as early as Sunday. But a union scandal makes...

admin - December 3, 2018
0
Katy knows what she wants (Picture: Invision) For those who maybe fancy going on a date with Orlando..