"We as a society are talking about social justice versus social injustice. We as a community need to take a look at ourselves," New Orleans Police Chief Shaun Ferguson told reporters at the scene.The 9-year-old was pronounced dead at the scene of the shooting in New Orleans' Seventh Ward, a police department statement said. Ferguson said the child was shot in the head. Police originally said the child was 10.In New York, police are investigating the shooting death of a 1-year-old Davell Gardner on a playground at a park in Brooklyn on Sunday. New York Mayor Bill de Blasio spent time with the family of the boy on Monday as well as talking with community leaders in Brooklyn.The mayor described the shock the family is feeling and a "deep well of pain you could see in their eyes.""No parent, no family should ever have to go through that," de Blasio said.A 12-year-old boy was wounded in the leg in another shooting in New York over the weekend."It is heartbreaking for so many reasons. It begins with the fact that there are so many guns out there and that is a New York tragedy and a national tragedy," de Blasio said on Monday.

CNN affiliate WDSU identified the boy killed in New Orleans as Davonte Bryant and interviewed his father, Donald Bryant, who said Davonte would have turned 10 in two weeks."Innocent bystanders. I do not know what they were shooting for. They are killing babies. They just killed a baby. A good baby. A 9-year-old baby," Donald Bryant told WDSU.All three victims were on a residential street Monday when they were approached on foot by at least one person who opened fire, Ferguson said. It is not clear if the victims and shooters knew each other.Police later released a statement asking for information to identify the three occupants of a white Jeep Wrangler believe to be the getaway vehicle in the shooting. 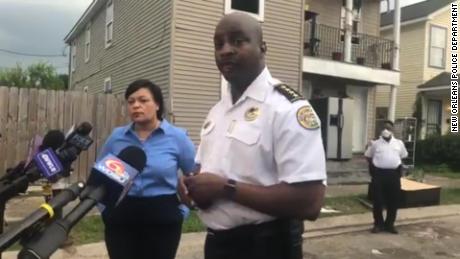 Ferguson said he was "begging" with the community to come forward with information about what he called "an unthinkable act.""We do not want any street justice. We do not want any more blood on our streets," Ferguson said. "Let us handle it, get us that information and let us do our job."The two teenagers were taken to the hospital: a 15-year-old female with a gunshot wound to the stomach and a 13-year-old male with a gunshot wound to the leg. Ferguson said both were in stable condition. The boy was pronounced dead at the scene, according to a statement from the NOPD."It is not only unfortunate, it is unacceptable behavior that we cannot accept in New Orleans," Mayor LaToya Cantrell said Monday evening.

The shootings of Davonte and Davell come on the heels of at least six other children who were killed by gun violence over the Fourth of July weekend across the US.Read More – Source

The Sims 4 Get Famous Expansion Pack: Release date and more revealed by EA

How a months-old AMD microcode bug destroyed my weekend

Nintendo Switch Wolfenstein 2 New Colossus Review: The Game of the...

We talk to the founder of fashion brand Seraphine about sexism...

Candace Owens Accuses The Left Of Wanting Their Slaves Back