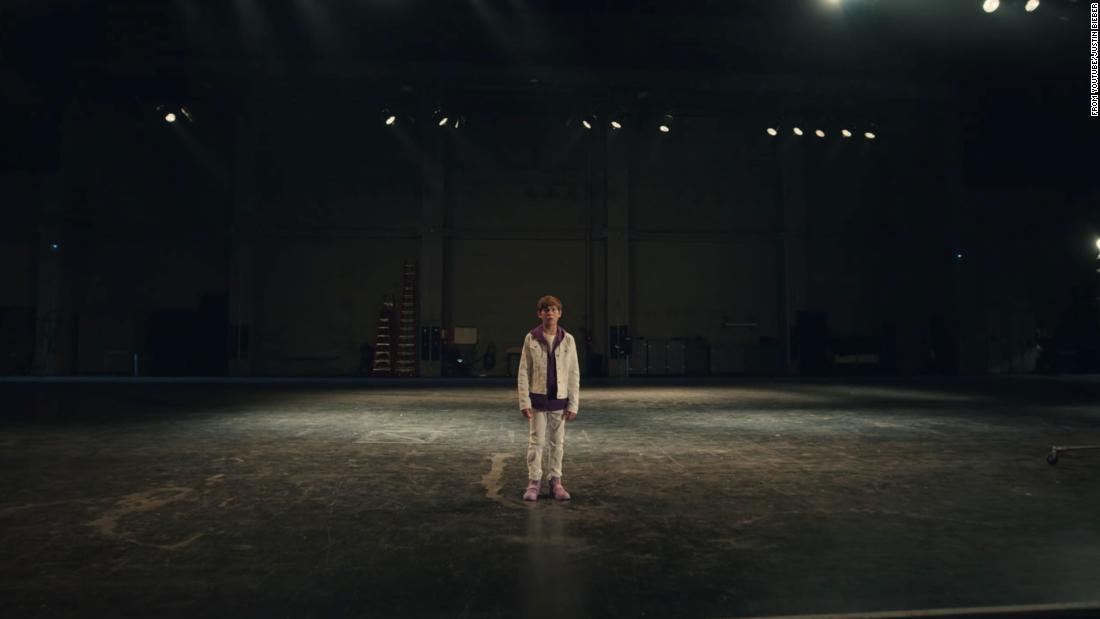 Justin Bieber shows the dark side of childhood stardom in the new music video for "Lonely." The video was released at midnight on Friday. As of Saturday, it's already racked up over 8 million views. A 14-year-old Jacob Tremblay, who plays Bieber, dons the signature purple hoodie and side swept bangs of Bieber's "My World" era. Bieber, who is now 26, was discovered at age 13 by manager Scooter Braun. In the video, Tremblay is seen by himself in a dressing room before producer Benny Blanco, who collaborated with Bieber and producer Finneas on the track, lets Tremblay know it's time to get on stage. Tremblay sings the song's melancholy lyrics to a seemingly empty audience before it's revealed in the last 10 seconds that the real Bieber has been listening. "And maybe that's the price you pay / for the money and the fame at an early age/ And everybody saw me sick/ And it felt like no one gave a s*** / They criticized the things I did as an idiot kid," Bieber sings. The lyrics and video have a much more somber tone than the music video for rapper DJ Khaled and Drake's "Popstar," released last month. In that video, Bieber struts around a house party at a mansion, and lip synchs lyrics about promiscuity, alcohol use and the decadence of fame. But in "Lonely," Bieber doesn't lionize fame — instead, the song paints a much more realistic image of what it means to be world famous as a teenager. Back in September 2019, Bieber posted on social media about mental health, reflecting on the mistakes he had made in his past. "I was 18, with no skills in the real world, withRead More – Source

If you haven’t watched ‘You’ yet, you better get on it because season 2...

Jimmy Nail pulls out of Sting’s musical The Last Ship

admin - January 21, 2018
0
US musician Tom Petty died last year from an accidental drug overdose, his family has revealed. The..

Kanye West just said 400 years of slavery was a choice

Is Kylie Jenner calling Travis Scott her hubby to drop a...

admin - October 18, 2018
0
Is Kylie trying to hint to Travis that he should propose? (Photo: ANGELA WEISS/AFP/Getty Images) Kyl..