"Stop asking for money. Let the baby die. It's called Darwinism. Happy Holidays."Ahlers had been putting up flyers near a shopping mall in Toledo, Ohio, to help raise money for his baby boy, Randy James, lovingly known as RJ. But last week as he was driving by the area, he noticed that someone had responded with a hateful message. "I came out. I saw it. Immediately took the one down. There were other ones that were up, but somebody, some other good Samaritans, kicked them down," Ahlers told CNN affiliate WTVG.RJ was born in July with two rare conditions: mosaic trisomy 9 and agenesis of the corpus callosum, according to a GoFundMe page set up by his parents to help cover the cost of his care. The first is a chromosomal disorder that can result in intellectual disability, developmental delay, growth problems, heart defects and other abnormalities. The second is a defect that affects the development of the brain.Since coming into the world, his parents say, RJ has fought his hardest to beat the odds. In the four or so months that he's been alive, his parents write, RJ has been to at least 15 specialist appointments. 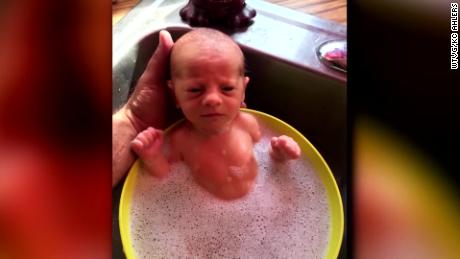 Though they have health insurance, the bills are adding up. One test ordered by a geneticist cost $10,000. So, Ahlers and his wife sought donations. He simply couldn't believe someone who read his sign could have so little empathy. "It shocked me," he told WTVG. "I mean, it really shocked me that someone would have that kind of cruelty." Despite the hurtful message, most of the community has been supportivRead More – Source

Nicki Minaj announces retirement to ‘have my family’

admin - March 26, 2019
0
Kris opened up about his struggle (Picture: PA) Kris Boyson has admitted he got so depressed he ran ..

Photo London is a tawdry treasure-trove of 1970s-style erotica

Private investigator has spent a decade on Jeffrey Epstein’s trail