Emcees Sandra Oh and Andy Samberg opened with a joke at the expense of the Oscars — and its protracted search for a host, after naming and parting with Kevin Hart — saying that "one lucky audience member" would be chosen to host that show.Through the course of the evening, the honorees registered political points on a variety of scores, whether that was Regina King discussing work parity for women; Mexican director Alfonso Cuaron, a dual winner for "Roma," referring to the power of cinema to "tear down walls" — a clear reference to President Trump's proposed border wall; or Christian Bale, a winner for playing Dick Cheney in "Vice," taking a shot at Republican Senate Majority Leader Mitch McConnell.Brad Simpson, accepting for FX's "The Assassination of Gianni Versace," also cited the erection of walls and lingering presence of the homophobia reflected within the limited series, urging the arts community to let their voices be heard and "Resist."For the most part, though, the presentation's tone was celebratory, with Oh turning serious — after a comedy bit that actually flattered nominees in the guise of roasting them — to savor the greater inclusion in this year's lineup of movies, including films headlined by people of color like "Black Panther" and "Crazy Rich Asians.""Witness this moment of change," Oh said, triggering an appreciative response from the crowd.One of the best-received statements came from Meher Tatna, president of the Hollywood Foreign Press Association, who spoke of the need for a free and robust press, announcing grants toward that end. (The HFPA devotes part of the millions that NBC pays to televise the awards to philanthropic causes.)As noted, there were emotional moments, several nostalgic ones and plenty of major surprises, starting with "Bohemian Rhapsody" and Glenn Close, whose stunned reaction spoke volumes. 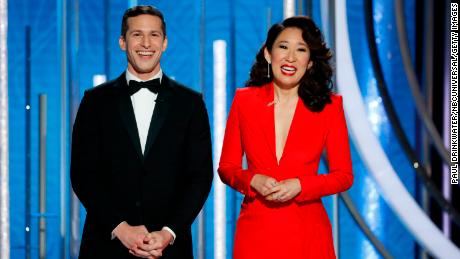 Oh, whose parents were in attendance, beamed as she collected an award for the BBC America drama "Killing Eve." Michael Douglas thanked his 102-year-old dad; Dick Van Dyke garnered an extended standing ovation; Close teared up talking about her mother; and Carol Burnett inaugurated a new career-achievement honor with one of the night's best speeches. Still, with its slightly unorthodox hosting tandem, the comedy often veered into silliness, such as a pointless gag that involved giving audience members free flu shots. Samberg's cleverest line almost slid by in a blur of rat-a-tat banter, saying that "Vice" — questionably nominated as a comedy thanks to the Globes' drama and comedy/musical split — had "invaded the wrong category based on false intelligence."Part of the challenge that the Oscars have faced in charting this year's show is the conflicting desire to somehow be both edgy and safe, to feature talent that will excite the audience without waking up to a huge next-day controversy.To the extent these awards are viewed as one of the bellwether for the Oscars — despite a mixed track record on that score — the surprising results at best brought a bit more clarity to some key races, but confounded others. The HFPA remain a group that marches to its own drummer, giving the most conspicuous boosts to the period buddy film "Green Book" and "Bohemian Rhapsody."That early joke notwithstanding, the Globes didn't produce a candidate to host the Academy Awards, but they did provide a sort-of road map for how to navigate the award-show waters, putting the focus squarely on the ebullience of the winners to define the night.That might not be the most exciting formula for an awards show that, from a production standpoint, felt sporadically amateurish. But it did produce its share of surprises, while reflecting the heart of what these events — at their core — are ultimately supposed to be about.

In pictures: A hospital in the US battling for the lives of COVID-19 patients

admin - April 27, 2019
0
Everybody does it better nowadays GameCentral readers name the retro games they regret going back t..