Unlike the Oscars, the Globes split their best picture honors into two, recognizing drama and musical or comedy. Yet because there's usually an abundance of worthy contenders for the former and a dearth of candidates for the latter, head-scratching selections find their way into the comedy field.This year's pick would be "Get Out," Jordan Peele's crowd-pleasing directorial debut, about an African-American man who goes to visit the parents of his white girlfriend. The movie mixes in a variety of elements — horror, social satire and yes, some laughs — although practically nobody would instantly think "comedy" upon seeing it.The "Get Out" mystery comes into a bit more focus, however, when one looks back to 2016, when the Globes tapped "The Martian" — a science fiction film starring Matt Damon — as best comedy.What do "Get Out" and "The Martian" have in common, besides being fine movies? Both made a lot of money at the box office, bringing some additional popular appeal to the Globes telecast.So by shoehorning them into the awards — even in the wrong category — the HFPA opened up another slot on the drama side, while still adding a movie that will leave more people saying "Hey, I saw that" to its lineup.In the broad strokes, the Globes' approach of separating drama and musical/comedy sounds welcome, creating an opportunity to laud movies that otherwise wouldn't receive much love or attention on the awards circuit. Serious fare, after all, is generally the preferred choice come Oscar time.Studios decide how to submit films, and there's obviously crass calculation in that. But the HFPA reserves final say over how movies are categorized, though the group's members aren't exactly known for standing up to the companies that assiduously court them.The main problem is that the comedy/musical category is somewhat anachronistic, given how rare live-action musicals are these days. Last year, of course, produced a no-brainer in "La La Land," and this year brings "The Greatest Showman," starring Hugh Jackman. But this isn't the 1930s or '40s — the latter being the decade when the Globes, celebrating their 75th anniversary, were inaugurated — when musicals were plentiful. 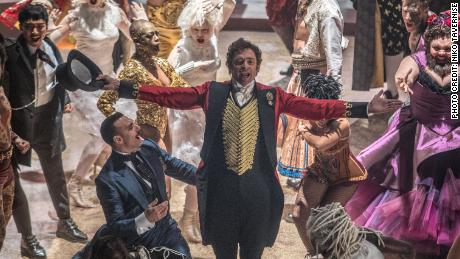 The HFPA actually amended its rules after "The Martian" criticism, saying that dramas with comedic overtones should compete as dramas. But that didn't prevent the "Get Out" flap, raising questions as to whether the "rule" was really just more of a suggestion.Because the Globes are still treated as a bit of a lark relative to the Oscars and prestigious guild-backed awards, oddities in its nominations tend to be downplayed. Still, comedy director Judd Apatow wasn't amused by "The Martian's" nominations, tweeting, "Trying to dominate the comedy category when you are really a drama afraid of dramatic competition is a punk move."Damon took a lighter approach, joking about the movie having excised its musical numbers, and shrugging off second-guessing about its placement. "It doesn't matter," he told the "Today" show. "It's certainly not up to us. There's not really anything we can do about it."When faced with absurdity, in other words, perhaps the best thing to do — whether you're in an actual comedy or not — is simply to laugh it off.

Thousands of people forced to live in their cars in California

admin - June 7, 2019
0
Jeremy Kyle has been asked to attend the parliamentary inquiry into reality TV. The digital, cultur..