The woman, identified as 32-year-old Yujing Zhang, on Saturday afternoon told a US Secret Service agent she was there to use the pool and produced the passports, a criminal complaint filed in US District Court for the Southern District of Florida alleged. She was admitted past a security checkpoint after a resort security manager verified that her last name matched the surname of a club member. A “potential language-barrier issue” raised the possibility she was the daughter of the member. She didnt give a definitive answer when asked if she was there to meet anyone and was escorted to a front desk in a golf cart.

When questioned by a receptionist inside the club, Zhang said she was there to attend a United Nations Chinese American Association event later that evening, according to the complaint. The receptionist confirmed that no such event was scheduled and was unable to find Zhangs name on any list of people approved to be past the security checkpoint.

When a Secret Service agent questioned Zhang further, she allegedly said she arrived early for the event so she could “familiarize herself with the property and take pictures.” Zhang then presented a document written in Chinese that she said was an invitation to the event. Agents were unable to confirm the documentation, because they didnt know Chinese. Besides noting no such event was scheduled to take place that evening, agents also remarked that her claim she was there to attend a UN event differed from the reason she gave a different agent earlier, that she was there to use the pool.

Agents eventually took Zhang to a different location and asked further questions of her. According to the complaint, an agent “freely and without difficulty” conversed in English with her and informed her she had unlawfully gained entry to the club. Zhang became “verbally aggressive.” She was then transported to a Secret Service office in West Palm Beach, Fla., where she signed a statement waiving her Miranda rights.

According to the complaint, which was signed by Secret Service Agent Samuel Ivanovich:

During the second interview of Zhang, she claimed her Chinese friend “Charles” told her to travel from Shanghai, China, to Palm Beach, Fla., to attend this event and attempt to speak with a member of the presidents family about Chinese and American foreign economic relations. Agents were unable to obtain any information more specifically identifying Shangs purported contact, “Charles,” as Zhang claimed she has only spoken to him via “WeChat,” which your affiant knows from investigative research to be the dominant instant messaging platform in China. Additionally, Zhang stated that she did not tell agents at the main checkpoint that she was going to the pool. And when the security guard told her the name of “Zhang,” she just thought it was the person running the event and she was going to meet them. However, your affiant notes that Zhang exhibited a detailed knowledge of, and ability to converse in and understand even subtle nuances of, the English language. For example, as agents were attempting to obtain written consent for examination of electronic devices found in her possession, Zhang read the entire form in English out loud to agents. Additionally, Zhang would question agents about the context of certain words throughout the form. In doing so, Zhang showed her understanding and comprehension of the English language through reading and speaking.

A search showed Zhang was carrying four cellphones, a laptop computer, an external hard drive, and a thumb drive. A prelRead More – Source

How the West struggled to combat digital foreign interference

Why Democrats need to keep worrying about Trump and Facebook

Mortal Kombat 11 Beta Release Date: How to access the Closed... 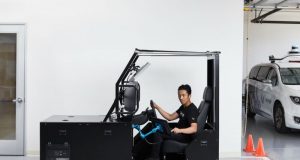 admin - July 11, 2020
0
EnlargeVoyage The ideal self-driving car would drive itself all the time, in all situations. But ach..