Thompson teased the news Saturday at San Diego Comic-Con during the reveal of "Thor: Love and Thunder," the upcoming fourth installment of the "Thor" franchise. Marvel Studios' Kevin Feige confirmed it to Gizmodo. When asked whether "Love and Thunder" would have an LGBTQ storyline, Feige responded, "The answer is yes.""How that impacts the story remains to be seen with that level of representation you'll see across our films, not in just Thor 4," he said. This is great news for people who have fallen in love with Thompson's not-completely-straight portrayal of Valkyrie. Thompson herself expressed disappointment that material more clearly revealing Valkyrie as bisexual was cut from 2017's "Thor: Ragnarok," but even without the confirmation, her character radiated bi energy. There's a very good reason for that: Just as anyone familiar with Marvel comics could have told you what happened after the big snap in "Infinity Wars," they could also tell you that Valkyrie's been bi — for years.

In 2013's Fearless Defenders series, Valkyrie had a tense will-they/won't-they relationship with Dr. Annabelle Riggs, an archaeologist who made no secret of her attraction to the dreamy shieldmaiden. They literally kiss in the very first issue! When Riggs (already in love) brings it up, Valkyrie delivers this devastating curve: "I have lived for millennia," she says. "Do you believe you are the first person I've rescued — man or woman — who has rewarded me with a kiss?"Annabelle is eventually killed when Valkyrie temporarily transforms into the Doom Maiden of Rage. (Valkyrie is really the spirit of the Norse heroine Brunnhilde inhabiting a line of different host bodies, and you can think of a Doom Maiden as a dark squad of Valkyrior). Valkyrie is so devastated by Annabelle's death that she literally BRINGS HER BACK TO LIFE, and they SHARE A BODY. It gets even weirder from there, when Annabelle starts dating another lady, but still. It's bisexual, guys.

Although Valkyrie may now claim the title of the first LGBTQ superhero in MCU history, Marvel Comics has a few prominent LGBTQ characters in its lineup. The most famous is the X-Men franchise's Northstar, who is considered the first openly gay comic book superhero. (Northstar has been around for decades, but you may recall that the character made waves again when he married his boyfriend in 2012 in another first: a gay superhero wedding.) 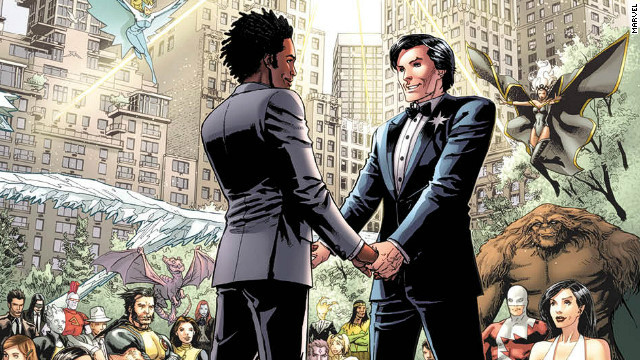 And, by the way, Marvel doesn't have the market cornered on canonically LGBTQ characters. All the way back in 2016, Wonder Woman comic writer Greg Rucka confirmed that Wonder Woman is bisexual because of … well, the logic of the whole "living your entire life on an island of ladies" thing. "It's supposed to be paradise," he said during an interview with Comicosity. "You're supposed to be able to live happily. You're supposed to be able — in a context where one can live happily, and part of what an individual needs for that happiness is to have a partner — to have a fulfilling, romantic and sexual Read More – Source

Putin Say Trump Was Of No Interest To Him Before The Election: Just A...

I laughed a lot at Netflixs Space Force, but my inner space wonk cried

This is not the first time transgender athletes have run in the Boston Marathon....

In the case of sugar, the nanny state really does know...

admin - July 12, 2019
0
Boris Johnson created a furore last week by announcing that he was considering getting rid of the so..

Man was shot 8 times and died after checking on concerned...

admin - March 10, 2018
0
TV Guide As anyone even mildly familiar with The Big Bang Theory knows, the show's theme s..