The Court of Arbitration for Sport (CAS) said Jeglic had accepted the anti-doping violation and the results of an investigation into his conduct will be released when the Games are over.The press attache for the Slovenian Olympic Team, Brane Dmitrovic, told CNN on Tuesday there would be no further comment until the results of tests on Jeglic's B sample were returned.The hockey player is the third athlete to fail a drug test at the PyeongChang Games so far.Japanese speed skater Kei Saito was sent home from the Olympic village last week after returning a positive drug test, the first athlete to do so at the 2018 Winter Olympics. 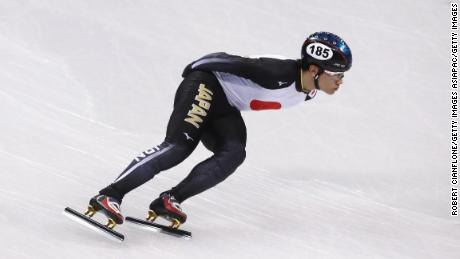 Russian officials have requested security camera footage to defend Olympic curler Aleksandr Krushelnitckii, who is suspected of failing a doping test.The results of Krushelnitckii's B sample to confirm the original result came back positive and the OAR are athlete has released a statement apologizing, describing it as "a huge blow both in reputation and in career.""First of all, I want to apologize to my partners on the Olympic team, our delegation and all the fans for not being able to protect ourselves and Nastya from the problems that we faced today," it read."I'm very sorry that the previous victory of Russian curling has now become the subject of a doping scandal, which is doing immense harm to our sport and to all Russian sports in general."At the same time, I am ready to openly state that I have never, ever during my time participating in sport,ever used forbidden drugs and any other dishonest ways of competition in competitive sport."The Russian Curling Federation is already taking steps to defend Krushelnitckii, who won bronze in the mixed double curling event."We have filed an application to the Investigative Committee (of Russia) to probe the case," the federation's vice-president Andrei Sozin told Russian state-controlled news agency TASS on Monday. "We have also requested data from video cameras in Japan and South Korea to show who entered the premises and so on."Sozin told TASS Russian authorities had a "clear understanding" that Krushelnitckii had not taken part in doping."He guarantees that he does not use meldonium and is ready for any probe and we trust him," Sozin said. "This drug is absent from the doctor's medicine box and from him."The Court of Arbitration for Sport opened an investigation into the Russian at the request of the International Olympic Committee (IOC) after Krushelnitckii's A sample tested positive for doping.A hearing date has not been set, the statement said.Russia was banned from the 2018 Winter Olympic Games following state-sponsored doping, leading up to and including the 2014 Sochi Winter Games.But more than 160 Russian athletes were allowed to compete, provided they could prove they were clean from doping, under the banner of Olympic Athletes from Russia (OAR).

An A to Z of my favourite games – Readers Feature

admin - September 23, 2019
0
"Chernobyl" was named best limited series, with additional honors for writing and directing in a loa..

Night In the Woods Switch review – a serious Animal Crossing

admin - February 16, 2018
0
Written by Jooyoung Shin, CNN Jooyoung Shin is an Assistant Professor in the Department of Fiber Sc..