In both instances, credit the respective networks and producers for at least trying to do something a little different than the conventional TV reboot. Yet each, in its own way, runs into a brick wall when it comes to having much reason to stick around beyond that initial burst of curiosity, morbid or otherwise.Granted, the very fact that people (including yours truly) feel compelled to write about about HGTV — the network airing "The Brady Bunch" renovation show — likely counts as a victory. These days, just knifing through the clutter is surely worth something.Neither show really works, though, in part because they don't just dabble in nostalgia, but essentially wallow in it.HGTV got the bright idea of acquiring the Studio City, California, house that provided the exterior for "The Brady Bunch," paying a hefty premium over the $1.88 million asking price, purchasing the home for $3.5 million.The network then enlisted the original "Brady" kids — Barry Williams, Maureen McCormick, Christopher Knight, Eve Plumb, Mike Lookinland and Susan Olsen — to participate in a wholesale renovation of the inside, pairing them with familiar (to viewers of the network, anyway) HGTV stars to transform the home into a replica of the studio set that was used back in the 1970s.Why? That's the answer that "A Very Brady Renovation" never fully answers, despite the renovators obsessing over the small details, and the dutiful "Wow!" reactions from the cast — now eligible for AARP membership — about things like making the entryway "very Brady."The ostensible rationale is a contest to spend a week in the house, along with six (naturally) guests. It's a cheeky come-on, but frankly, the $25,000 cash prize sounds more enticing.Obviously, there's a lot of goodwill built around the show, which lingered in various forms, from reunion movies and variety specials to a clever 1995 movie send-up. For many, "The Brady Bunch" was a part of childhood, back when blended families seemed more exotic, and an architect dad could comfortably support six kids.In terms of attention, HGTV has gotten plenty of public-relations bang for its buck, in much the same way that Fox's "90210" caused a bit of a stir when it made its debut in August. In that case, the show actually reassembled the cast playing slightly jaundiced versions of themselves, reunited in a show about making a revival of "Beverly Hills, 90210," with all the meta-ness that entails. 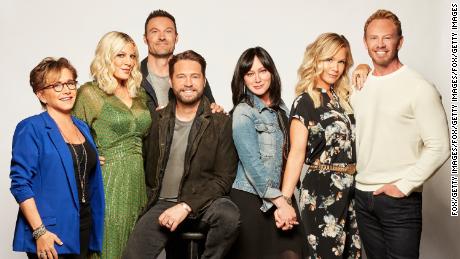 ‘Leap for humankind’ as NASA spacecraft orbits an ancient asteroid

admin - January 1, 2019
0
A NASA spacecraft has broken records by successfully going into orbit around an ancient asteroid. T..

Our pick of free to air movies: Monday, April 23

Trump “officially” takes US out of WHO, but withdrawal is a...

Robert Pattinson in negotiations to be ‘The Batman’