Macron, who will also meet political leaders and local officials, wants to "hear their voices, their proposals and with the aim of mobilizing them to act," a spokeswoman for the Elysee Palace said Sunday.The meetings will come ahead of Macron's address to the nation which is expected to center around national unity. Macron is anticipated to urge the "gilets jaunes," or "yellow vest" protesters to seek dialogue after a weekend in which 1,723 people were taken in for questioning and 1,220 were taken into custody, according to the Interior Ministry. Across the country, 135 people were reported wounded.Macron is facing criticism from both left and right with demonstrators marching against the rise of living costs, the scrapping of the "fortune tax" and accusations that the former banker has done little to address the inequality in French society. Further pressure grew over the weekend with police firing rubber bullets and hundreds of canisters of tear gas at the demonstrators, some of whom set vehicles on fire during Saturday's protests.The protests have paralyzed Paris with landmarks such as the Eiffel Tower being closed to the public, some metro stations being closed and sporting events across the country called off.About 8,000 police were on the streets of Paris and tens of thousands more deployed across the country. 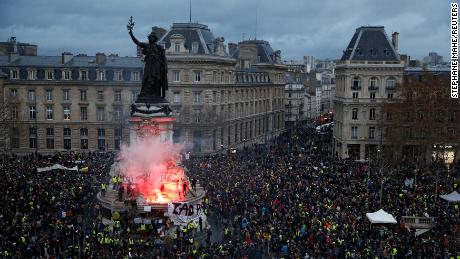 On Sunday, Finance Minister Bruno Le Maire claimed the the unrest was creating a "catastrophe" for the French economy.The French retail sector has suffered a loss in revenue of about $1.1 billion since the beginning of the yellow vest protests last month, according to Sophie Amoros, a spokeswoman for the French retail federation."It's a catastrophe for commerce, it's a catastrophe for our economy," Le Maire told reporters as he walked around Paris while surveying the damage wrought by protesters.The protests, which have stretched as far and wide as the southern cities of Marseille and Toulouse, brought out 136,000 people across the country on Saturday, police said.Originally a grassroots movement, the "gilets jaunes" first emerged online with Facebook events set up by citizens mostly from deprived rural areas.They began by coordinating road blockades across France to protest the fuel tax hike but the protests have since mushroomed into a broader demonstration of anger against Macron. Dominique Moisi, a foreign policy expert at the Paris-based Institut Montaigne and a former Macron campaign adviser told CNN the French presidency was not only in crisis but that Europe's future also hung in the balance:"In a few months from now there will be European elections, and France was supposed to be the carrier of hope and European progress. What happens if it's no longer? If the president is incapacitated to carry that message? And it's about the future of democracy, as well, illiberal democracies are rising all over the world."And if Macron fails the future of France risks looking like the presidency of Italy today. And it's much more serious because we have a centralized state which plays a major role in the balance of power within Europe. But make no mistake, it is a French version of a much more global phenomenon." 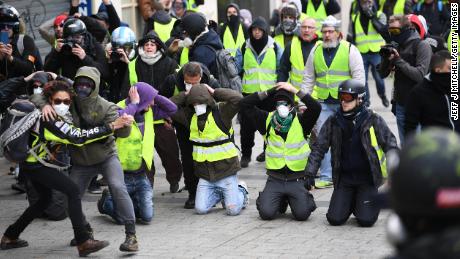 French Foreign Minister Jean-Yves Le Drian on Sunday urged US President Donald Trump to refrain from commenting on the protests in France and not to meddle in the country's domestic policies. "I say to Donald Trump, and the President of the Republic [Emmanuel Macron] has also said: we do not take part in American debates, allow us to live our life as a nation," Le Driat told LCI television. Trump on Saturday posted two tweets referring to the "yellow vest" anti-government protests, saying the Paris Agreement on climate change wasn't "working out so well for Paris." When asked about Trump's remarks, Le Drian also said the US President should "be careful with what he said.""Most Americans do not agree with his decision to break away from the Paris agreement," he added.

The Effect review: Play about drug trial certainly a trial for audience

admin - November 27, 2018
0
A good rhythm game knows how to get you moving to the beat, but very rarely does it require your ful..

Working Lunch: Temper City is hot in every sense of the...

A wild temperature rollercoaster will hit the Midwest this holiday weekend

Court sentences journalists to years in prison for ‘terrorism’ charges

admin - April 30, 2018
0
The lengthy sentences have added to increasing fears over press freedom, particularly with national ..