Watch CNN's town hall "Stand Up: The Students of Stoneman Douglas Demand Action" live on Wednesday, February 21 at 9 p.m. ET on CNN TV and CNNGo.Less than a week after a shooting took the lives of 17 classmates and teachers, students and chaperoning parents made the seven-hour trip from their homes in Parkland to Tallahassee.On Wednesday, they plan to meet with elected officials, including Gov. Rick Scott, and push for gun control, mental health funding and other changes they believe will end the scourge of school shootings.CNN was aboard two of the buses in the caravan — which arrived at Leon High School in Tallahassee late Tuesday — and spoke to several students about why they decided to make the trip.

Before getting on the bus, senior Julia Bishop, 18, attended the funeral of her friend, 16-year-old Carmen Schentrup, who was killed in the shooting. "I was there, but in my head, I was thinking, 'What am I going to do to move forward from this? What am I going to do with my grief? What am I going to do with my hate?' " Bishop said. She had a message for legislators who may not want to hear from her and her classmates on Wednesday. She doesn't care about the legislators' political parties but rather their willingness to listen. Bishop said, "If they are unwilling to compromise with me or at least hear where I'm coming from, hear what I have to say, hear what we care about as the people that they're supposed to be representing," she is going to write down the lawmakers' names. "And then after I'm finished doing that, I'm going to say 'Great. I'm not going to be voting for you in this upcoming midterm election,' " she said. "And I'm 18 years old, I have the right to vote. And I will be telling everyone I know … not to vote for this person, and they'll be out of a job. I'm sure of it." While in Tallahassee, Bishop will think of Carmen, who would have turned 17 on Wednesday. Carmen was witty, smart, insightful, "the absolute sweetest," Bishop said. Her friend was a National Merit scholar with a bright future, "and it's disgusting that that was taken away from her," Bishop said.

Kyle Kashuv, a 16-year-old Stoneman Douglas student, who identifies as a Republican and a conservative, supported Donald Trump in the general election. Kashuv said he has always been pro-gun but his stance has changed some since the shooting at his school. "We have such a limited government that should not be totally reliant on … the police, we should be able defend ourselves as citizens," he said. "I still totally believe that but I think that there should be a limit to who could acquire such weaponry."He added: "And if you're not of the right mindset, you're not mentally stable, then you should not be able to acquire that."Kashuv said legislation in place "is very weak on that." He said there isn't "any true argument as to why there should not be mental health restrictions.""Something has to be enacted to make sure this will never happen again," he said.

"Honestly, it's the first step. Every major movement in the United States, it always starts at the state level. So first we've got to talk to our own state, our own governor, and our own senators and representatives. Have some change here," he said."Then we're going to have to apply it for the rest of the country, because this country needs the change and it needs to happen now."Read: These Florida lawmakers accepted money from the National Rifle Association

"The first couple of days I was super traumatized and I didn't really know how to act or even if I wanted to go back to school," said the 14-year-old freshman."And then I looked at 'Never Again' and I wanted to be a part of that and to make my voice louder so that those who don't have a voice can speak through me."

Grady, a senior at Stoneman Douglas, said he and his classmates are going to pressure lawmakers."If you're not with us, you're against us and you're against saving the lives of innocent children. And we're going to be voting you out," he said.

A student at Stoneman Douglas, Hemans held a sign saying "Enough" and "#GunReformNow" as she waited for her classmates."I'm going to Tallahassee to get justice," she said.

"The main focus of all of us is to go and speak to our elected officials … and hopefully create change so that this won't ever happen again to any other student, to any other family," said Hoth, a senior."No one should ever have to go through this type of experience again. No one should have their lives taken this way when it can be something that's easily preventable through common-sense gun control and mental health care that's essential to everybody." 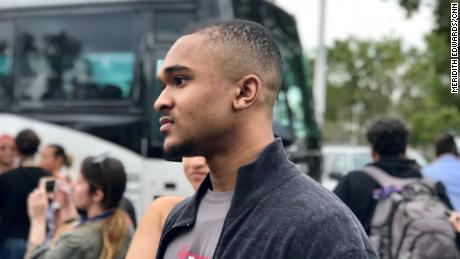 "We think that we're going to be able to start a conversation. People need to get talking about this. This is not an issue that needs to recur. It needs to stop with us. It's unfortunate that it even had to happen to us in the first place, and it's our mission … to effect change and put a stop to this. Our movement is called the 'Never Again' movement for good reason: Never again will this happen to anyone," Koerber said."We're all here because we need to strive for change, and the legislation needs to change because we've fallen victim to lazy legislation for far too long," he added.

"I want to go because all those people that passed away, seven of them were my friends and they had lives, and those lives meant something, and they were taken away in a matter of minutes. So I want to go to Tallahassee because this should be the last time that this happens," Phoebe said."It shouldn't be another group of kids that pass away from another school shooting. It should be the last one. It shouldn't be anything like this happening again. If we make a change, if we get better gun control laws and help for people with mental illness, then it could possibly be very big and stop incidents like this (from) happening again."Phoebe also pointed to the age requirements that permitted the shooter, at age 19, to purchase an assault rifle."He can't walk into a bar to buy a beer, but he can buy an assault rifle? That makes no sense," she said. 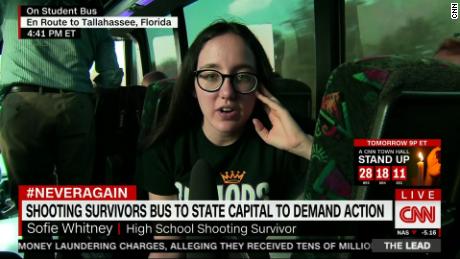 "The biggest goal that we have in going to Tallahassee is just having a conversation with our representatives and our senators, talking about mental health, background checks, assault rifles. Just getting our voices heard, face to face, so they can't hide from us," she said."I think the difference between us and Sandy Hook is that those kids weren't old enough to speak their experiences and their tragedy. But here we are, 100 of us about to go to Tallahassee to talk to our government. We're running the 'Never Again' movement, we're running March For Our Lives, all student led. And I think it's really symbolic that we're doing it because we're the ones who experienced it."

CNN's Tina Burnside and Jake Tapper contributed to this report.

For the major networks, November is (fingers crossed) the new September

Demi Lovato opens up about relapse in candid single ‘Sober’

Artisanal doughnuts on the rise: Like coveted concert tickets, they can...

A man wore a sign to find his wife a kidney...