The dramatic indictment reveals a bold covert effort that went beyond the previously-known use of “fake news” and social media misdirection to divide American voters and harm Trump’s Democratic opponent, Hillary Clinton.

It charges that as early as 2014, Russian nationals physically entered the U.S., and, hiding their true identities, gathered intelligence, organized political rallies — and even paid Americans to assist their political sabotage. The Russians allegedly paid one American in Florida to dress up as Hillary Clinton in a prison uniform and hired another to build a cage to “imprison” the Clinton impersonator at a Florida rally.

The effort was led by the St. Petersburg-based Internet Research Agency, a notorious online misinformation operation with suspected Kremlin ties, according to the indictment, and involved what the court filing called “unwitting” U.S. citizens and Trump campaign officials.

The indictment concludes that the Internet Research Agency “had a strategic goal to sow discord in the U.S. political system.” While noting that the operation undermined multiple presidential candidates, including Trump GOP rivals Marco Rubio and Ted Cruz, the document says that the shadowy Russian agency’s operations “included supporting the presidential campaign of then-candidate Donald J. Trump… and disparaging Hillary Clinton.”

“Russia started their anti-US campaign in 2014, long before I announced that I would run for President” — U.S. President Donald Trump

No Trump campaign officials or associates are named in the indictment, which does not address the Russian hacking and theft of Democratic emails during the 2016 campaign or the other known contacts between Trump associates and Russians.

Nor does the indictment say whether the defendants were acting on orders from the Kremlin. But U.S. intelligence officials have previously stated that Russian President Vladimir Putin personally approved a wider election interference operation. Russia experts said the Kremlin was likely behind the effort.

Weiss and others noted that one of the indicted Russians, Yevgeny V. Prigozhin, who controls two companies that finance the Internet Research Agency, is a close Putin ally. The State Department sanctioned Prigozhin last year, citing his ties to senior Russian government officials and Russia’s defense ministry.

Democrats said the new charges underscored the gravity of Mueller’s investigation and the need for his political independence amid calls from conservatives for an end to his work.

Trump himself claimed vindication in a Friday afternoon tweet.

“Russia started their anti-US campaign in 2014, long before I announced that I would run for President. The results of the election were not impacted. The Trump campaign did nothing wrong – no collusion!” Trump wrote.

Mueller’s indictment does not say one way or another whether the Russian efforts might have influenced voter behavior, however, although U.S. intelligence officials have previously said that Russian hacking efforts did not manipulate voting machines to alter the official election vote count.

The document does allege that some of the defendants were in communication with Trump’s campaign, but not that Trump officials knowingly colluded with Russia. Its specific charges include conspiracy to defraud the United States, conspiracy to commit wire fraud and bank fraud and aggravated identity theft.

“Some defendants, posing as U.S. persons and without revealing their Russian association, communicated with unwitting individuals associated with the Trump Campaign and with other political activists to seek to coordinate political activities,” the indictment said.

According to Mueller’s indictment, the defendants allegedly posed as Americans in online interactions with political and social activists. In once instance, the Russians “communicated with a real U.S. person affiliated with a Texas-based grassroots organization” who recommended they focus on so-called “purple” states such as Colorado, Virginia and Florida. The indictment alleges that the Russians then began using the term “purple states” in subsequent planning.

Deputy Attorney General Rod Rosenstein emphasized at a Friday news conference that the indictment does not accuse any Americans of wrongdoing.

“Very happy,” Trump personal attorney John Dowd wrote in an email to POLITICO when asked for his reaction on the Mueller indictments. He did not elaborate.

But Democrats argued that the indictment underscores the gravity of Russia’s election interference, and the importance of Mueller’s work.

“The Special Counsel’s indictments make absolutely clear that the Russians perpetrated a strategic effort to undermine and influence the 2016 U.S. presidential election to support the campaign of Donald Trump, and are continuing to interfere with our elections,” Democratic House Majority Leader Nancy Pelosi said in a statement.

“As desperately as President Trump insists that the Special Counsel investigation is a ‘hoax’, these latest indictments build on multiple guilty pleas and indictments of several Trump campaign officials, demonstrating the gravity of the Trump-Russia scandal,” Pelosi added. 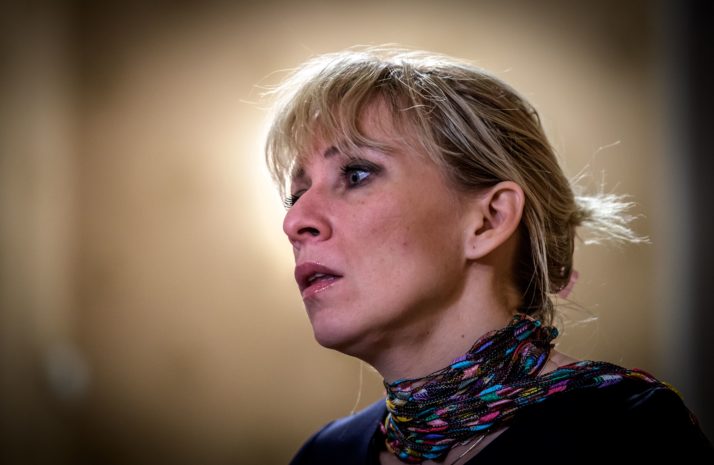 Shortly after Trump’s tweet, the White House released a statement quoting Trump as saying, “[w]e cannot allow those seeking to sow confusion, discord, and rancor to be successful. It’s time we stop the outlandish partisan attacks, wild and false allegations, and far-fetched theories, which only serve to further the agendas of bad actors, like Russia, and do nothing to protect the principles of our institutions. We must unite as Americans to protect the integrity of our democracy and our elections.”

The statement made no mention of any possible Trump administration response to the Russian interference. Trump has repeatedly said would like to forge warmer relations with Moscow.

Mueller’s 37-page charging document alleges that the Russian operatives created online accounts under names like “Woke Blacks,” “Blacktivist” and “United Muslims of America” to encourage minority groups not to vote for Clinton. They also promoted Twitter hashtags like #Hillary4Prison, alleged on Facebook that Clinton’s campaign had committed voter fraud.

The Russian effort continued after election day, in the form of at least two rallies organized against the newly-elected Trump

It is illegal for foreign nationals to purchase advertising, including on social media platforms like Facebook, meant to influence a U.S. election.

Two of the indicted Russians allegedly traveled to the U.S. in 2014, visiting Nevada, California, New Mexico, Colorado, Illinois, Michigan, Louisiana, Texas and New York “to gather intelligence” and that the duo had discussed “evacuation scenarios.”

The indictment also alleges that the Russian effort continued after election day, in the form of at least two rallies organized against the newly-elected Trump — presumably with the goal of sowing further division within the U.S.

A Republican Party spokeswoman tweeted those findings, presumably to suggest that the Russians did not actually favor Trump. But the indictment overwhelmingly shows the Russians favored Trump and opposed Clinton.

The indictment also alleges that the Russian-created “Blacktivist” Instagram account promoted the candidacy of Green Party presidential candidate Jill Stein. Hillary Clinton herself has asserted that Stein may drawn a decisive number of votes from her in key swing states.

“Choose peace and vote for Jill Stein,” the account said. “Trust me, it’s not a wasted vote.” 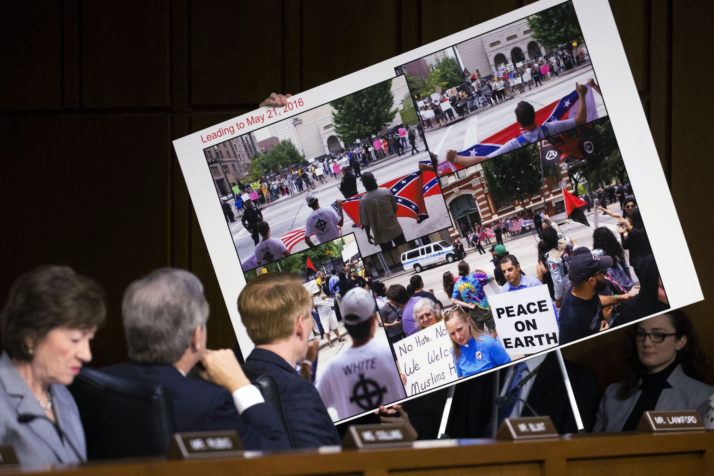 The indictment alleges Russians planned rallies both for and against Trump, presumably with the goal of sowing further division within the U.S. | Shawn Thew/EPA

The Russian co-conspirators allegedly relied on traditional tools of spycraft to conceal their efforts. They purchased cameras, SIM cards and “drop phones” to communicate secretly and discussed “evacuation scenarios” for colleagues who entered the U.S. under false pretenses.

The indictment also accuses the defendants of deleting emails, social media accounts and other evidence amid media reports about Russian election meddling.

“We had a slight crisis here at work: the FBI busted our activity (not a joke),” one defendant wrote in an email to a family member. “So, I got preoccupied with covering tracks together with the colleagues. I created all these pictures and posts, and the Americans believed that it was written by their people.”

The indictment is likely to rekindle interest in steps the U.S. can take to combat online Russian influence operations.

Experts called it highly unlikely that the named Russians would ever face justice within the U.S. That would require their extradition by a Russian government which calls the charges false, or for one of the defendants to visit the U.S. at risk of almost certain arrest.

“How are you actually going to do anything against these guys if they all stay hidden in Russia?” asked Clint Watts, a former FBI national security official and expert on Russian disinformation.

Ads and posts said to be placed by the IRA were displayed in Congressional hearings last fall that featured testimony from Google, Facebook, and Twitter executives. Twitter revealed last month that it had identified some 3,100 accounts linked to the so-called “troll farm.”

The indictment offers the most comprehensive road map of the IRA’s methods to date, including its organizational chart, which features divisions dedicated to graphics and mastering search-engine optimization, commonly known as “SEO.” 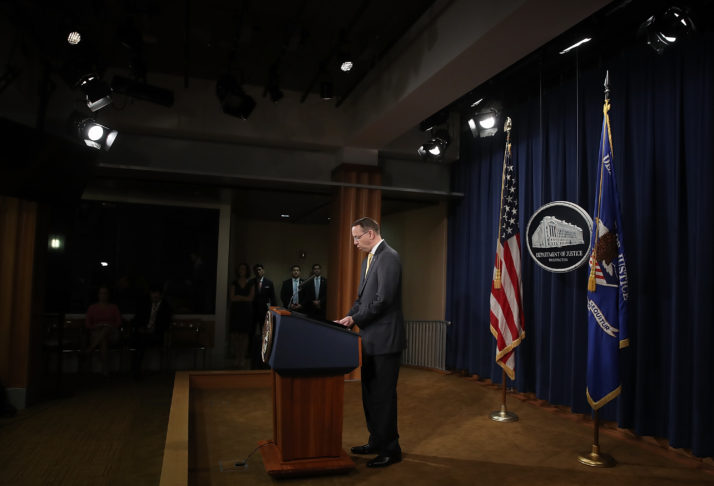 U.S. Deputy Attorney General Rod Rosenstein said the indictment was a reminder “that people are not always who they appear to be on the internet” | Win McNamee/Getty Images

The indictment concludes that the IRA used digitally savvy techniques, from assessing the reach of the social-media groups they might infiltrate to having supervisor’s check workers’ posts for authenticity. The agency also used so-called virtual private networks (VPNs) to make it appear as if they were users logging into the targeted internet sites from within the United States.

“This indictment serves as a reminder that people are not always who they appear to be on the Internet,” Rosenstein told reporters Friday. “The indictment alleges that the Russian conspirators want to promote discord in the United States and undermine public confidence in democracy. We must not allow them to succeed.”

The indictment is likely to rekindle interest in steps the U.S. can take to combat online Russian influence operations.

Senators Amy Klobuchar (D-Minn.), Mark Warner (D-Va.) and John McCain (R-Ariz.) introduced a bill last year that would create federal disclosure requirements for political advertisements sold online, including who paid for them, much like those governing television and radio ads.

The bill now 16 co-sponsors, but McCain is the only Republican among them, and Klobuchar said recently it probably won’t pass this year. Klobuchar and the lead sponsor of a House companion bill, Representative Derek Kilmer (D-Wash.), called for Congress to act right away.

Mueller’s office also revealed Friday that a California man pleaded guilty earlier this month to taking part in identity thefts the Russians carried out in order to fund rallies as well as Facebook ads promoting their election-related social media accounts.

Richard Pinedo, 28, of Santa Paula, Calif, entered a guilty plea in a closed federal courtroom in Washington Monday to a single felony charge of identity fraud. Pinedo admitted that his company, Auction Essistance, sold bank account numbers that other users used to set up accounts with “a large digital payments company.” The court filings in his case provide little detail, but the indictment against the Russians says they used PayPal accounts to purchase online ads. 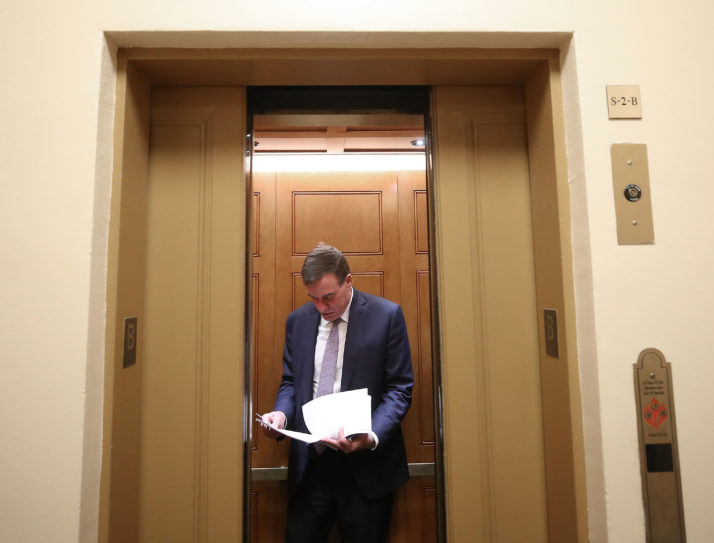 A statement of facts Pinedo accepted that were unsealed Friday say that he knew many of his customers were abroad and that he “willfully and intentionally avoided learning” about the stolen identities.

According to court records, the case against the Russians is assigned to three prosecutors from Mueller’s office: Jeannie Rhee, Lawrence Atkinson and Ryan Dickey.

Joe Sugg and Dianne Buswell joke about their weird Kama Sutra moves in...

EUs Hogan threatens to hit back if Trump slaps tariffs on...

admin - December 5, 2019
0
The European Commission is backing France in its trade fight with U.S. President Donald Trump over a..