In the season finale of USA Network's "Suits," the future bride of Prince Harry made her final appearance as attorney Rachel Crane in a send-off that doubled as a preview of her wedding to be. Of course, Rachel and longtime love interest Mike (Patrick J. Adams) weren't married at St. George's Chapel at Windsor Castle. No, the pair of attorneys said "I do" in a much more low-key — and very last-minute — ceremony. The two had been set to marry, but with six weeks to go, Rachel and Mike found themselves confronted with an opportunity they couldn't resist: a chance to move to Seattle to run a firm that specializes in class action cases against Fortune 500 companies. The problem was they would only have days to move, and it would have been difficult for the pair to return to New York City for their Big Day six weeks later. The Season 7 finale of "Suits" was also Adams' final episode. So they decided to move up the event. 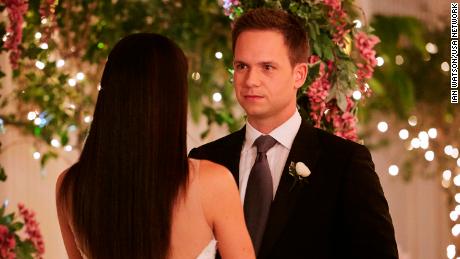 With help from Donna (Sarah Rafferty), they pulled off a spur-of-the-moment ceremony complete with vows and a very familiar dress. Yes, Rachel pulled a Kate Middleton and re-used the wedding dress she wore to her almost-wedding to Mike back in Season 5. She made some adjustments, of course. A USA spokesperson told CNN that Rachel's A-line Anne Barge Versailles dress, which retails for $6,800 at Kleinfeld Bridal, went through some alterations before wedding day number two, including the addition of a thin black sash and change to the back of the dress. 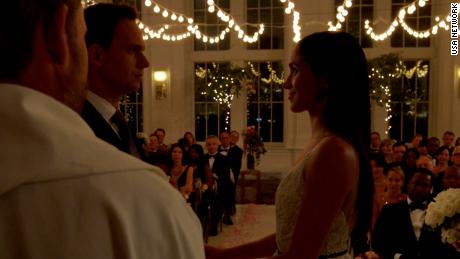 Markle's character walked down the aisle as John Legend's "All of You" played. "From the second I met you, I knew I wanted to be here with you some day — walking down the aisle arm in arm," Mike tells her. She adds: "You're the husband I've always wanted and I can't wait to begin our adventure together." Markle's real-life new adventure as a royal begins May 19. "Suits" is currently in production on its eighth season.

Rapper dies after falling from plane during video shoot

Masks made Czech Republic the envy of Europe. Now they’ve blown it

admin - December 10, 2018
0
Telling a story of the cyclical nature of light and dark and possessing both stamina-focused combat ..

Probe into vaping-linked illnesses turns up form of vitamin E from...

admin - August 30, 2018
0
Bethany Minelle, entertainment reporter The Queen of Soul will be laid to rest at Greater Grace Temp..