When Jeff Holler decided to leave his thriving corporate career to start his own business, he thought it was the biggest decision he could make. Soon after, he was tested once again and faced with another difficult decision that challenged his values and beliefs.

“I had come to a point in my career where I was traveling all the time,” Holler said. He was living in Texas with his wife and two daughters, and the company wanted him to move to California.

“My dad passed away when I was 15, so I didnt have a choice to not know him,” Holler said. “But if I had a choice, I wanted to make sure that my daughters knew me and I knew them, and I could be a good dad.”

With that in mind, he started The Capital Chart Room, which helps private business owners with the many decisions they face. Holler knew from the get-go that as the owner of his own business, he only wanted to work with people he respected. As the tiny venture took off, he was soon spending more money than he was making, and the answer seemed to come in one potential client.

“I was introduced to a gentleman that was by far the most affluent person that Id met at the time, and he liked my ideas and our process … but I learned immediately he lacked integrity, and he didnt treat people with respect, and treat women with respect, and was crude,” Holler said. “I didnt want to build my business on people like that.”

It seemed to be a decision between keeping the business afloat or sticking to the promise hed made to himself when he started his business.

“I was being tested in a major way,” he said. “And ultimately I said no.”

Satisfied he had made the right decision, he later met another person who helped springboard the business and introduce him to other clients of great integrity. He would have never met this person if he hadnt walked away from the first client.

“So the decision paid off in a lot of ways but most of all, I was able to stick to my commitment to God and to myself. That was a pretty big test right there,” Holler said. And hes done so ever since.

Holler seemed the perfect fit to write about how to live out your values in a day-to-day business setting. A friend of his, Alan Sears, one of the founders of the Alliance Defending Freedom, asked him to do just that.

Holler said no; he was a slow writer, and it would take a tremendous amount of time away from his work. Sears asked him to pray on it—and Holler felt he was called to write a book.

It would be a book introducing several business owners who share their stories, and at the beginning Holler only knew one person he wanted to include, David Green of Hobby Lobby. Then he began networking and talking to people from all over the country, and then traveling all around the world to personally speak with the different business owners he ultimately featured in the book, “Bigger Than Business.”

“There are eight different stories on six different continents,” Holler said. “I didnt intend for it to be a global book, thats just where [God] led me.” 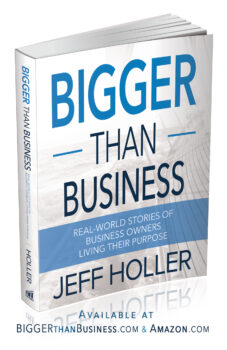 The first story begins in Dallas, Texas, where we meet Michael and Debbie Rasa of Rasa Floors. It begins with an extramarital affair, then a failing marriage, and a company falling into debt.

“When most people read that story, they say, This is not what I expected!'” Holler said.

“Their stories about self-inflicted problems, from some choices they made, and sin that they fell into, and all the collateral damage that caused and, how by Gods grace, they recovered from that, and how they have become complete through Gods grace,” Holler said. “So its really a story about grace.”

Every story in the book is completely candid. The business owners who are known to the public as successful figures openly share their failures, and are honest about how theyve been tested. None of these paths have been easy, and that is perhaps the point.

“And as you read the stories, youll see how when they did choose to compromise, the damage caused, and when they didnt, the blessings that came out of it,” Holler said.

Later in the book we meet a Rwandan genocide survivor; her business is the smallest of those featured in the book in terms of annual net revenue, but the impact shes made in her community cannot be overstated.

“[Graces] story is the most emotional,” Holler said.

“Her heart became rock hard with anger and bitterness, and she simply wanted to die. And its just a story of how God worked in her, not only to heal her heart, but to use her then to help heal other womens hearts, who are in the same situation,” Holler said.

Then in communist East Germany, in Karl Marx Stadt, where Frank was raised an atheist, he somehow finds Christianity and is tested almost immediately thereafter, as one would expect.

“He came to understand that what he was teaching in the communist trade school was not consistent with his newfound faith. The story reflects the risks that he was willing to take not to conform to communism,” Holler said. “He did something that most would consider impossible.”

In Asia, Holler met Dr. Suparno, whose family took a hard hit during the financial crisis of 1997-98, a chaotic, riotous time.

“The country fell to corruption and he and his family had to choose to conform to the corruption of the day to survive, or not compromise their values and totally trust God,” Holler said.

Its been a humbling experience for Holler to interview these owners who speak transparently about their struggles.

Every one of these eight stories is vastly different from the other; the business owners come from differenRead More – Source