According to a tally from Poweroutage.US, the outages were concentrated in the tri-state area: As of Wednesday morning, power was out for nearly a million people in New Jersey, about 775,000 people in New York, and about 700,000 in Connecticut. In all, outages stretched from North Carolina up to Maine.The storm system also killed several people as it rippedthrough the East Coast after making landfall as a Category 1 hurricane on Ocean Isle Beach, North Carolina, Monday.Isaias brought hurricane-force wind gusts to Long Island, according to unofficial reports from the National Weather Service. Peak wind gusts reached 67 mph in Greenwich, Connecticut, 68 mph at Newark Airport in New Jersey, and over 75 mph in multiple parts of New York's Suffolk County, the weather service said.The storm, now a post-tropical cyclone, has moved into southeastern Canada, bringing heavy rain and powerful winds over the province of Quebec.As of Wednesday morning, the storm's maximum sustained winds were about 40 mph and it is expected to get weaker, the National Hurricane Center said, adding the storm is likely to dissipate Wednesday night or Thursday. A wind advisory was in effect for all of eastern and Northern Maine until early Wednesday morning, according to the National Weather Service in Caribou. "We are seeing numerous reports of Gusty Winds 35-45mph within Showers & behind the precipitation. We could see gusts as high as 50mph. This may cause downed trees on power lines," the service said on Twitter. Track the storm's path

At least two people were killed when a tornado struck a mobile home park in Windsor, North Carolina, Bertie County officials said. Twelve people were injured and taken to hospitals.In St. Mary's County in southern Maryland, the driver of a car died after a tree fell on the vehicle's roof. The weather service reported at least three separate tornadoes occurred in the southern part of the state early Tuesday. Two were in St. Mary's County while the other was in Calvert County, the service said. 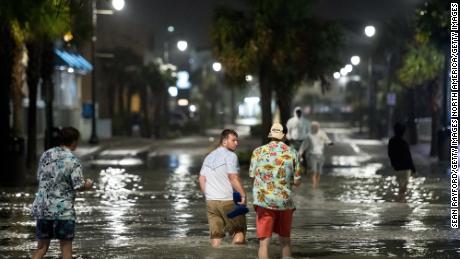 First Dates 2018: The good, the bad and the excruciatingly awkward

Caught in amber: ancient spider with a whip-like tail

admin - February 25, 2018
0
The fossils were uncovered by amber miners in northern Burma, sold to dealers, then bought by resear..

Persona Q2 Review – You Oughta Be In Pictures

Inside Hugh Hefner’s world: Tycoon’s belongings to go on sale