Page gave birth to a girl at a hotel in downtown Napa with her midwives' help on Monday, two days after she and her husband fled their Windsor home because of the encroaching Kincade Fire in Northern California.It was a joyous moment for Rachel and her husband, James — though maybe a little startling for neighboring guests. Hotel staff didn't know of the birth, the couple said, and the front desk called the room to check on them when it received a noise complaint."Our midwives answered the phone and were like, 'Oh, yeah, no, we're fine. We just had a baby,'" James told CNN's Alisyn Camerota in an interview on "New Day" Friday."I was not quiet," Rachel acknowledged. "So, I'm sure it was alarming to them."The infant, Penelope, is the couple's second daughter. 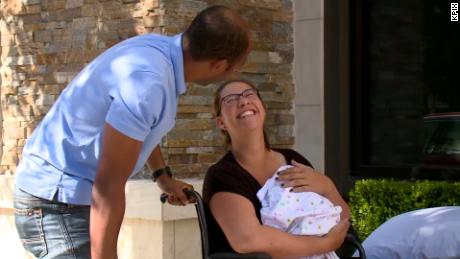 The Pages had planned to have the baby at home with midwives. But the Kincade Fire — one of numerous wind-driven blazes burning in California in recent days — forced the couple and tens of thousands of other people to flee, many under evacuation orders.The Pages initially went to stay at a friend's home on Saturday, but with the baby coming along, they checked into the Andaz Napa hotel on Sunday at their midwives' suggestion, the Napa Valley Register reported.Hotel staff indeed didn't know Rachel was there to give birth, because they generally don't ask questions about why guests are there, an employee who answered the phone said Friday. A message that CNN left with a manager wasn't immediately Read More – Source

Physics indicates some of Earths earliest animals helped each other feed

How do you leave a warning that lasts as long as...

Hands-on: HPs leather-clad laptop might just be the best convertible around

admin - February 7, 2018
0
A tsunami alert sparked panic across the US after a test warning was sent to thousands of phones in ..