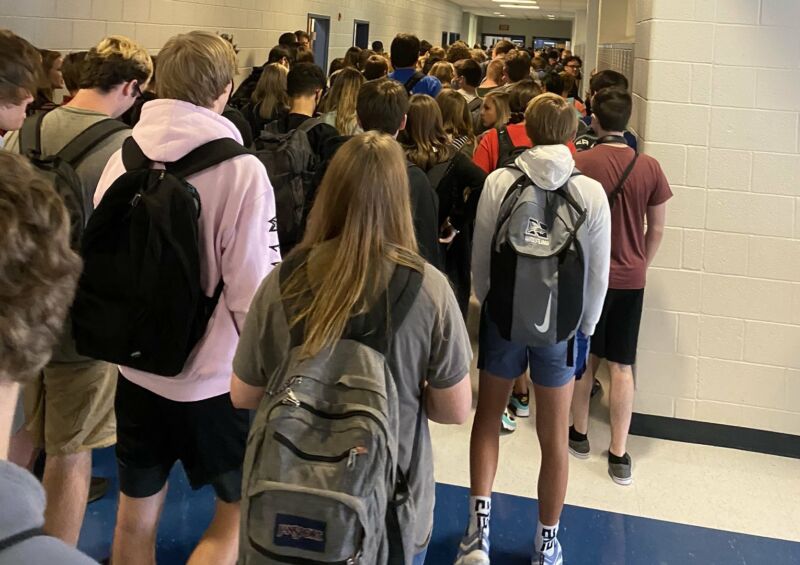 There are nine newly confirmed COVID-19 cases at the high school that suspended a 15-year-old who had tweeted a photo of a hallway packed with maskless students.

North Paulding High School in Dallas, Georgia sent a letter to parents Saturday, saying, "At this time, we know there were six students and three staff members who were in school for at least some time last week who have since reported to us that they have tested positive." The letter was published by the Atlanta Journal-Constitution.

Most or even all of the six students and three staff members who tested positive could have had the virus before the school reopened on Monday, August 3. As Harvard Medical School explains, "The time from exposure to symptom onset (known as the incubation period) is thought to be three to 14 days, though symptoms typically appear within four or five days after exposure," and "a person with COVID-19 may be contagious 48 to 72 hours before starting to experience symptoms."

But regardless of when those nine people were infected, their presence at a school where hallways were packed with students not wearing masks means that many other students and teachers were placed at risk of infections that could show up in test results in the near future. The high school has about 2,000 students.

Even before the reopening, some members of the high school football team had already tested positive for COVID-19. "Paulding County Schools have reported a total of 53 cases of coronavirus within the district since July 1," including 23 at the high school, according to Channel 2 in Atlanta.

As we reported Friday, the school issued a 5-day suspension to student Hannah Watters after she posted a photo to Twitter, noting the "jammed" hallways and "10 percent mask rate." The school lifted her suspension after extensive media coverage. One other unnamed student who was suspended for a similar reason also had the suspension reversed, the Journal-Constitution said.

Students attended class in person only on Monday through Wednesday, as the district said it conducted a short first week "so that all of our schools can step back and assess how things are going so far."

Update at 6:50pm ET: North Paulding High School announced Sunday that it has canceled in-person instruction for Monday and Tuesday, August 10 and 11, because of the nine positive cases and "the possibility that number could increase if there are currently pending tests that prove positive." The school said that on Tuesday evening, parents and students will be notified about whether in-person instruction will resume on Wednesday. Remote learning will continue while the school is closed.

“They sat in class all day long with no masks”

The Journal-Constitution provided details on some of the students who tested positive:

Angie Franks said both her nephews who attend the school have tested positive for COVID-19. One came home from school Monday unable to smell, she said in an interview with the AJC. His mother took him for testing and the results the next day showed him positive, Franks said. By then, his brother was exhibiting symptoms and was also tested. His positive results were returned Wednesday.

The students are quarantining at home, but both went to school Monday. Franks said the boys' father notified the school on Tuesday and Wednesday after getting their test results.

"They sat in class all day long with no masks and not social distancing," Franks said. "And I have no idea how many kids they came into contact with."

She said the boys didn't grasp the gravity of the virus and weren't encouraged to wear masks in classrooms or hallways by the school. Paulding County's school system is not mandating masks for students and staff, though it is supplying them for teachers.

Why Bill Cosby may not spend any time in prison