"It's the movie, when you watch it you're like, 'Oh, he's glad to be alive — so much so that he went back to the attic, pulled down all his old toys, and played with them again,'" explained Smith. "Which was kind of essential at that point, because I felt old after the heart attack, and I was like, 'Well, this will young me up.'"The film not only brings the fan-favorite, New Jersey-bred stoner comedy duo played, in reverse billing order, by Smith and his childhood friend Jason Mewes center stage once more: they first appeared as side characters in Smith's much-admired 1994 indie debut "Clerks" and would reappear in about half of his subsequent cinematic output, including headlining 2001's "Jay and Silent Bob Strike Back." The new film, which not only satirizes Hollywood's pervasive reboot/recycle culture but serves as something of a grand tour of Smith's quarter-century-long career, plays special engagements in theaters across the country on Tuesday and Thursday."We were trying to make it even before the heart attack happened," Smith told CNN. "We were getting close, then the heart attack happened and pushed us back like a year or something. But after the heart attack, the movie just became informed by it, because they told me, 'Hey, you got a 20% chance of living tonight' — which is like 'You've got an 80% chance of dying, motherf-cker.' And so all I could think about was, like, 'Oh, s—, this is the end.' And I wasn't upset, I wasn't wailing and gnashing teeth. I was like, 'You know what? I had a really good run, and I'm only 47, and that part sucks, but I can't complain.'""But the only thing I thought was like, 'Oh, s—. If I die tonight, the last movie I made was 'Yoga Hosers,'" Smith laughed, knowingly acknowledging that critics, and even his most devoted loyalists, have been turned off by his more recent output. "That's not the last one. It can't tell the tale.""I re-tripled efforts" in the wake of his recovery, he said. "I became obsessed with making a movie that could stand for the 25 years that I've been doing this. I call it a masterpiece, but not because it's genius…To me, this is like, 'This is everything I've learned, not just in 25 years of the business — because this is the 25th anniversary of "Clerks" this year — but, also everything I've learned in the 48 years of my life when we made it.""The whole thing was scary — I can't even put into words," said Mewes, who's known Smith for most of their lives and whose wife, who produces Smith's popular podcasts, was at the filmmaker's side when the heart attack occurred. But he was encouraged by Smith's renewed fervor to return to characters who meant so much to him. "It was nice to know we were going to get to do the movie, and it was something he really wanted at that point." "I was hell-bent on like, I gotta make this because this has to stand for everything, in case I have another heart attack," says Smith, "so that if I die I'm not laying there going like, 'Oh man — "Yoga Hosers?"' At least I could be sitting there going, 'All right, well, that says it all.'" 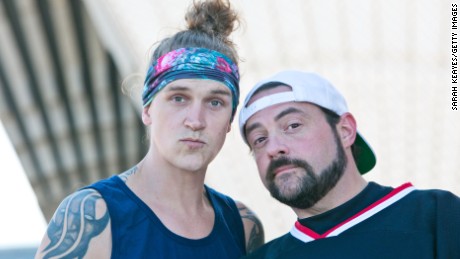 Along the way, Smith began to layer in characters, actors, locations and in jokes from all of the interconnected films within what he's long termed his View Askew universe (or View Askewniverse), as well as references to the entirety of a career that's included writing comic books, creating podcasts and online fan networks, standup comedy, public speaking tours and directing episodes of popular TV series like "Supergirl.""I got to sequelize ALL the View Askew movies!" he proclaims. "It's not only the sequel to 'Jay and Silent Bob Strike Back,' but also there're a 'Clerks' sequel in there, there's a 'Mallrats' sequel in there, there's a 'Chasing Amy' sequel. And then with Matt [Damon], he got a tiny taste of a 'Dogma' sequel…I said, "This will do it man, this will show everybody who I was." That way, if I'm still alive they're like, 'Oh, he made another f—ing Jay and Silent Bob movie.' But if I die, they'll be like, 'That was the most important Jay and Silent Bob movie ever made!'"Smith also recruited his 20-year-old daughter Harley Quinn Smith, to take on a key leading role as Jay's newly discovered daughter Millie, who joins the duo on an epic road trip. With her own nascent career gathering steam — she recently appeared in Quentin Tarantino's "Once Upon a Time…In Hollywood" — she was eager to share newly precious time with Smith on the new film."The fact that he was able to come back from his heart attack, change his lifestyle, become a much healthier version of himself and then make this film was so special, because it was kind of like him claiming his life back," she told CNN. "Being able to work beside my dad and beside Jay — who is kind of already like a second dad to me — and being able to spend a month with them making this, with so many of our family members and our friends, was such a special experience.""We've been friends before everything. We grew up in the same town and he put me in a movie…I didn't plan on acting or anything," said Mewes. "The bonus is not only do I get to experience all this these last 25 years, experience all these things and have a great job, I get to do it with someone I grew up with and is my best friend.""It was so awesome because my dad reconnected people who he hasn't really spoken to in a long time…It just felt like a reunion more than anything," said Harley Quinn Smith. "The fact that he was able to and get so many of his friends back is so cool. It was really important to my mom and I, and to our whole family, that this happened for him. He made it happen. He really made it happen." 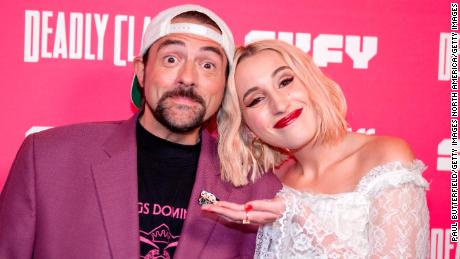 Smith suggests it was another force that helped him lure so many familiar faces from his previous projects — including Damon, Ben Affleck, Jason Lee, Shannon Elizabeth, Rosario Dawson, Joey Lauren Adams, Justin Long, Brian O'Halloran, the late Marvel Comics creator Stan Lee, Melissa Benoist and many more — to make time in their schedules to appear in the movie: sympathy over his near-death experience. "We should give the heart attack casting credit," he quipped, only half joking.A particularly emotional experience for Smith was resuming his friendship with Affleck, a once close friend who'd headlined two of Smith's films, "Chasing Amy" and "Jersey Girl." Over the course of several years, through Affleck's much-documented career and personal highs and lows, the two had grown estranged. But Smith was deeply gratified when Affleck showed up on set to reprise his role as "Chasing Amy's" Holden McNeil for a crucial scene. "It was really sweet, You hear about, 'It was like no time had passed…' those stories when people reconnect, and it literally was," he said. "We just picked up where we left off. It was really wonderful and it was therapeutic, man."Even after Affleck had agreed to appear, Smith was nervous about directing his old friend, who over the years had emerged as both an A-list Hollywood actor and an acclaimed filmmaker, helming "Gone Baby Gone," "The Town" and "Argo. "The last time I worked with him, it was on 'Clerks II' and he was already on his way to 'Gone Baby Gone' at that point. I haven't worked with him since he became a director — and not justRead More – Source

Lori Loughlin pleads not guilty in her first response to the...