"I didn't think that there would be a film," Fellowes tells CNN. "As far as I was concerned, the end of the series was the end of the show."But in an increasingly franchise-driven entertainment culture, where "Downton" was a rare original creation that sparked a global phenomenon and had viewers addicted to the unfolding fates of the aristocratic Crawley family and their devoted household staff that populated the British historical drama, the opportunity existed to extend the life of the concept beyond its six-season (or "series," as they say in the United Kingdom where it was produced) television run."I knew other people wanted to try and make a film, but it seemed to me logistically too difficult, and I didn't believe we'd make it happen," Fellowes confesses. "So that gave me really about a year of thinking that there wouldn't be a film."But producer Gareth Naeme — who originally contracted Fellowes to create the series on the strength of his screenplay for Robert Altman's 2002 film "Gosford Park" and Fellowes' 2004 novel Snobs — had envisioned a longer life since its fourth season."It was such a massive global hit in every territory and it was so recognized for its production values, I thought maybe we'd bring the TV series to an end, but this is big enough that it could go on in another form," says Naeme. The moment the series finished editing its final episode, Naeme adds, he began developing a film follow-up."The rumblings continued, and I gradually came to terms with the fact that there was a desire for a film and there was a market for it out there, and that I'd better start thinking about what we would put into it," says Fellows. Indeed, the audience's appetite proved to be quite voracious: in its opening weekend, "Downtown Abbey" defied projections by besting both the Sylvester Stallone-led action sequel "Rambo: Last Blood" and Brad Pitt's sci-fi opus "Ad Astra" with a surprise $31 million haul — three times its production budget.But the road to the box office bonanza wasn't cut and dried — Fellowes, Naeme and production team had to approach the project with the same painstaking care they'd lavished on the series.After a review of the series, and the final episode in particular, to take stock of where things had gone and might yet go, "I was conscious of looking for an event that would affect everyone in the house, and not just the family or just the servants," says Fellowes. "But at the same time I wanted it to be a positive effect — largely positive, anyway, I didn't mind if some people were angry, as long as they have some kind of reaction."Inspiration for an all-encompassing story hook came when Fellowes read a book about a real-life tour of the Yorkshire countryside that England's monarchs King George V and Queen Mary had made in 1912. "As I read it, I thought, 'Well, this is my idea!'" Fellowes reveals, transplanting the action to 1927. "They'll come to Downton, and that will put everyone on their toes. Everyone will have to kind of take a line about the whole thing. And then I did a bit more research into royal visits and that's how I came to it."Naeme instantly saw the cinematic potential of the concept. "It was just true to our core values," he says. "It felt like it was absolutely a story that could've been in the TV show, but it was of a much bigger scale…That was the biggest thing that we could do, and therefore it was a bigger story than those that we'd covered in the TV series."The story easily lent itself to subplots for all of the "Downtown" regulars, which led to a new challenge. "How do we get 20 actors who now are world famous, have these careers that are taking them all over the place, all available at the same time? And that was very complicated," admits Naeme."There were times when I thought this won't happen, but I was absolutely determined, because I felt it was a contract I had with the fans…And I would've felt that we let everyone down if we hadn't pulled it off."During what Naeme called an "agonizing" year and a half of negotiations to get the cast in place, Fellowes toiled away on the script, knowing that he had a different task ahead of him than when writing the series. "We wanted a combination of fans being welcomed back into a home which they had always enjoyed visiting and seeing people again whom they had always liked, and the kind of warmth associated with that," he says. "But at the same time we wanted a convincing movie at the end of it." 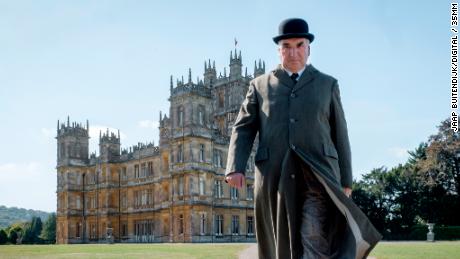 "We very determined from the beginning that the film would be viewable by people who had not watched the series and that there would be enough information within the film to tell all the stories, that they didn't have to know anything from watching the show" Fellowes adds. "We stuck to that, and we've had several people say they enjoyed it even though they never watched the show at all, which is very much music to my ears."Fellowes reveals that he embraced the fact that he was pushing himself into fresh storytelling territory. "I rather enjoyed the change," he says. "Writing a series is different from writing a film — that's just a basic structural fact. In a series, not every character expects to get a proper plot every week…Whereas in a film, I felt that every character we used had to have a narrative reason for being there. And every story we told had to be resolved before we parted. So that in itself was a completely different discipline to the series."The film's director Michael Engler, who helmed several episodes of the series, recalls that when cast and crew finally reconvened to begin shooting the film, returning to now-iconic Highclere Castle and other familiar locales, there was a brief, tentative moment as everyone wondered whether they remembered how to figuratively ride a bicycle again."It took a second, really — literally like a couple of minutes," says Engler. "Everybody had gone on and done other things and been busy. Some people have seen each other, some people haven't. What was surreal about it was it felt almost like Rip Van Winkle: you go to sleep, and three years later, you wake up and just pick up where you left off."When crafting the film's visual language, Engler had the unenviable task of hewing closely to the established style of the series while simultaneously venturing into more cinematic territory. "We didn't want to change the fundamental DNA of it, but we wanted to grow it and to expand it," he says. "Because we had more time, more money, more resources, we could give ourselves more extravagant opportunities, like helicopter shots and drone shooting….[We could] just allow ourselves to be a little less reserved, a little bolder in some ways…The goal was to make it feel like the same, but elevated and richer in the design." 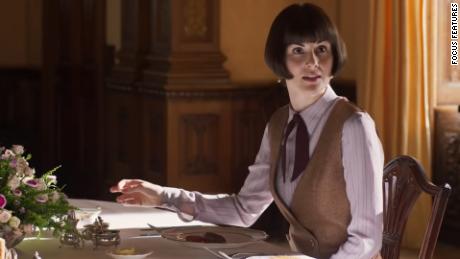 Along with the familiar "Downton" approach to lovingly chronicling the methodically, almost ritualistically performed chores throughout the estate, Engler was able to apply a similar but grander approach to the pomp and circumstance accompanying the royals and their entourage. "One of the things that I've always loved about 'Downton' was it takes that stuff very seriously," says the filmmaker. "It doesn't play fast and loose, and just say, 'Oh, it doesn't really matter where anybody standsRead More – Source

Papa John’s has found its next spokesman

Fame the Musical is coming to the Q with lots of...