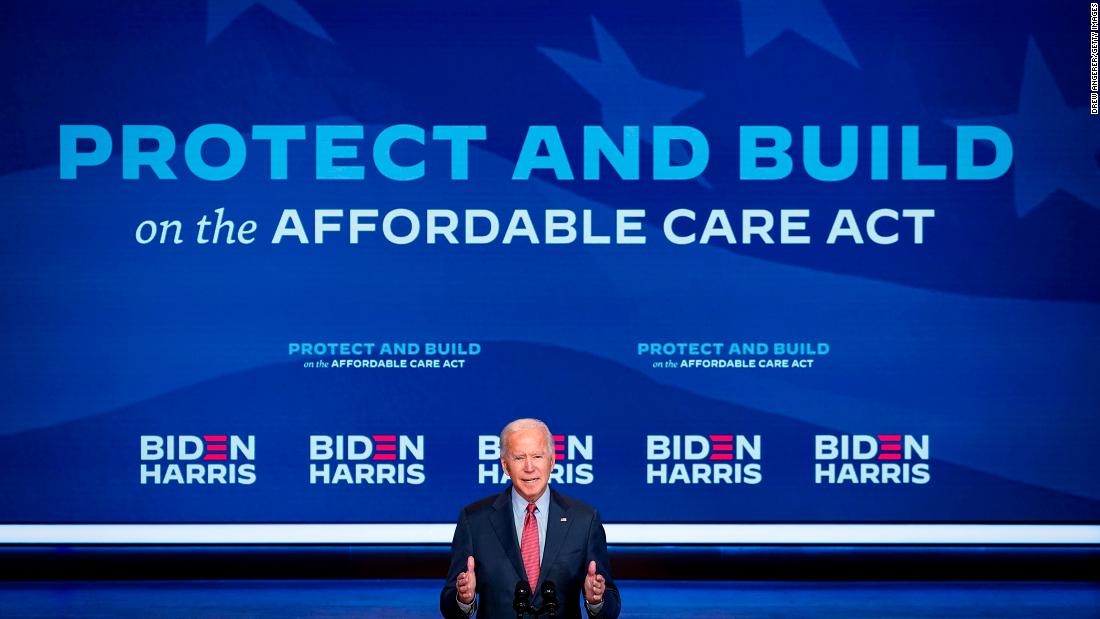 President-elect Joe Biden is expected to do the same.In their four years in office, the Trump administration made sweeping changes that affected the Affordable Care Act, Medicaid, abortion and transgender rights, in many cases reversing the efforts of the Obama administration. Most of the measures were done through executive orders and regulation since it was tough to get any bills through Congress, particularly after the Democrats took control of the House after the 2018 midterm elections.Biden's health officials will likely be active, as well, but it will take time for all their actions to take effect. "They don't have a massive eraser pen. They've got to go through the rule-making process," said Allison Orris, a former Obama administration official and counsel with Manatt Health, a professional services firm. "They are going to have to think about what comes first, second and third and be realistic about timing."Plus, the Biden administration may opt to keep and continue several Trump administration efforts, including shifting to value-based care, rather than paying doctors for every visit and procedure, and increasing access to telehealth, said Ian Spatz, senior adviser at Manatt. The two administrations also share common views on some measures to lower drug pricing, including basing Medicare payments on the cost of prescription medications in other countries and importing drugs from abroad. But Trump officials have not actually put these proposals in place.However, where the two administrations will differ significantly is messaging, Spatz said. While Trump focused on dismantling the Affordable Care Act, Biden will emphasize expanding the law and access to health coverage.Here are seven Trump health care measures the incoming Biden administration is expected to reverse.

The Trump administration took the historic step in early 2018 of allowing states to require certain Medicaid recipients to work in order to receive benefits. Eight states have received approval, seven have pending requests and four had their waivers set aside in court, according to the Kaiser Family Foundation. However, work requirements are not in effect in any state currently.The Supreme Court will decide on November 20 whether to consider a case challenging work requirements in Arkansas and New Hampshire.Biden's Health and Human Services secretary would be able to unwind the approvals, but it is a complicated task, said Joan Alker, executive director of the Center for Children and Families at Georgetown University. The secretary would have to determine whether to withdraw permission for the entire waiver or just certain features.Several of these waivers included other provisions that could make it harder for low-income Americans to retain Medicaid coverage, such as lockouts for non-payment of premiums.And just before Election Day, the Trump administration approved Georgia's waiver that will allow the state to replace the federal Obamacare exchange, healthcare.gov, with a private platform.While secretaries have the power to reverse waiver approvals, it isn't typical. More common is setting new guidelines for when a waiver comes up for renewal and for new applications.

One executive order Trump repeatedly points to is expanding short-term health plans, which typically have lower premiums, but provide less comprehensive coverage and don't have to adhere to the Affordable Care Act's protections for people with pre-existing conditions. The President has touted them as a less expensive alternative to Obamacare.In 2018, the administration allowed Americans to purchase these plans for just under a year, reversing the Obama administration's move that restricted their durations to only three months."The short-term plans have important symbolic significance because they restrict coverage to people with pre-existing conditions, which was a prominent political issue in the campaign," said Larry Levitt, executive vice president for health policy at the Kaiser Family Foundation.

In its first year in office, the Trump administration slashed funds to promote Obamacare open enrollment and to assist consumers with selecting plans by 90% and 84%, respectively. Many Affordable Care Act advocates point to a lack of advertising as a reason why sign ups have slipped in recent years. Trump officials also cut the open enrollment period on the federal exchange to six weeks, half of what it was before.And during the pandemic, the President refused to open up a special enrollment period to allow the uninsured to select policies — despite insurers' and even several Republican governors' requests to do so.The Biden administration is expected to reverse all these measures to curtail Obamacare.

Biden has promised to revoke the Trump administration rule barring federally funded health care providers in the Title X family planning program from referring patients for abortions.Title X serves about 4 million people a year, according to the Department of Health and Human Services. It provides funding for projects offering resources including contraception, breast and cervical cancer screenings, and preventive education and testing for sexually transmitted diseases and HIV — but not abortions.Last year, HHS moved to bar health care providers participating in the program from discussing abortion with patients or offering abortion referrals, prompting multiple federal court challenges resulting in blocks on the rule. In July 2019, the 9th US Circuit Court of Appeals upheld the court's prior ruling the rule to go into effect despite the ongoing challenge against it. The following month, the court denied Planned Parenthood's request to reverse its order, prompting the organization to withdraw from the program.The impact of the rule going into effect has been stark. About 900 clinics dropped out of the program by the start of 2020, according to a report by reproductive rights group Power to Decide, citing instances of more limited and expensive services. Additionally, after HHS opted to reassign relinquished Title X funds to other remaining participants, a Kaiser Family Foundation report found gaps in the new coverage.The American Medical Association, the main industry group for doctors, asked the Supreme Court last month to block the rule, citing conflicting rulings after the 4th Circuit Court of Appeals upheld a lower court's block on the rule in September.

Biden has vowed to reverse the so-called Mexico City Policy, a ban on funding for foreign nonprofits that perform or promote abortions, which Trump reinstated and expanded during his tenure. The Trump administration reinstated the measure — which had previously impacted only family planning assistance — in 2017 by presidential memorandum and extended it to all applicable US global health funding under the "Protecting Life in Global Health Assistance."Organizations that continued to promote or perform abortions stood to lose all US health aid under the policy — affecting more than 1,300 global health projects and an estimated $12 billion in US assistance in 2017-2018, according to the Government Accountability Office, an independent, nonpartisan agency that works for Congress.In September, the Trump administration advanced a proposed regulatory rule to further expand the ban, which already encompasses global health grants and cooperative agreements, to apply to contracts. The rule's 60-day comment periodended Friday.Based on data from 2013 through 2015, global health funding provided through contracts could account for almost 40% of all funding affected by the expanded rule, Jen Kates, senior vice president and director of global health and HIV policy at Kaiser, said at the time.Initially put in place by the Reagan administration, the policy has been rescinded by Democratic presidents and reinstated by Republican presidents, most recently retracted by the Obama administration in 2009. Even during the Obama years, US law banned direct funding for abortion services. But NGOs that performed the procedure were allowed to receive US funding for other programs, including those related to contraception access and post-abortion care.

The Biden administration is also expected to reinstitute a directive that states cannot bar Medicaid funds from going to qualified providers that separately provide abortions, such as Planned Parenthood. Medicaid funding does not cover abortions, except in cases of rape, incest or when the woman's life is at risk, due to the Hyde Amendment dating back to 1976.In 2018, HHS issued a letter to state Medicaid directors rescinding a 2016 Obama administration directive from April 2016, which warned cuts to family planning providers would break federal law. Trump also signed a bill in 2017 allowing states to withhold federal money from organizations that provide abortion services, including Planned Parenthood.

The Trump administration has been particularly hostile toward transgender Americans. Among its most criticized moves was an effort earlier this year to rollback an Obama-era regulation prohibiting discrimination in health care against patients who are transgender. A federal judge blocked the repeal this summer, ruling it violated a recent Supreme Court decision. Biden's website specifically refers to the effort and says he "will defend the rights of all people — regardless of gender, sexual orientation, gender identity — to have access to quality, affordable health care free from discrimination." Biden's LGBTQ policy plan also says he will work to expand funding for mental health services for LGBTQ Americans and that his administration plans to automatically enroll low-income LGBTQ people in the public option, once it's created, if they live in rural areas in states that didn't expand Medicaid.

admin - December 30, 2018
0
The President of the United States is the “worst” perpetrator of misinformation on the internet, the..