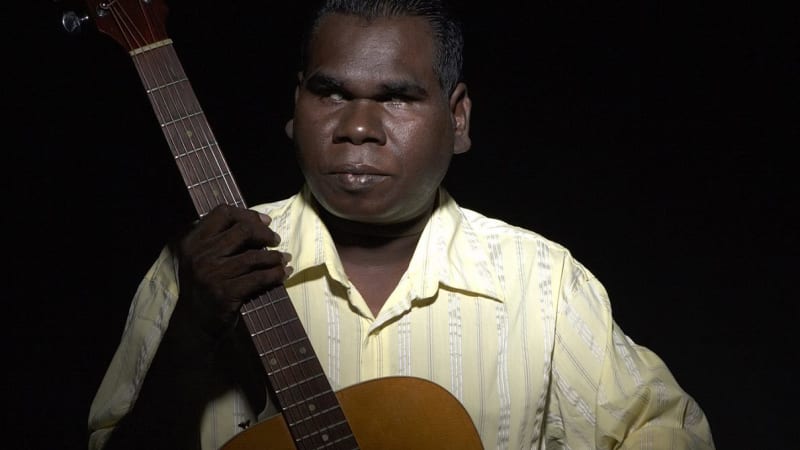 The result is Djarimirri (Child of the Rainbow), the final album from Gurrumul, who died in July, aged just 46

It is the result of five years of work and unlike any previous Australian recording. It's a synthesis of ancient Aboriginal chants, modern orchestral minimalism and the complex rhythmic patterns of Elcho Island's yidarki (the Yolgnu word for didgeridoo) playing.

It is a unique and hugely significant contribution to Australian music.

Why? In the process of recording Gurrumul's vocals (there are 12 traditional Yolgnu chants all improvised by Gurrumul and set against orchestral compositions performed by members of the ACO and SSO), Hoenen and composer/arranger Erkki Veltheim found they did not have to plaster one culture onto another – they discovered a uniquely Australian rhythm, a sound that seemed to be coming up from the land.

"We tried some of these pieces live and there was a big element missing," Hoenen says. "These songs in isolation are not as complete as when they have a yidarki. We brought the yidarki into the recording for the tuning reasons, for the Aboriginal sound reasons … I went to Elcho Island and firstly I worked with G on a whole lot of yidarki. Then I went and played those recordings to other members of the Yunupingu family … one of the members of the family is a master didgeridoo player in his own right. I got the pattern that these players would play to these songs.

"We don't think that we have musical riffs that come from Australia … Aboriginal people from the Northern Territory create amazing musical patterns that go with these songs. Some are in 4/4, others are in 12/8.

"Once we got the pattern, and once we got a player who could play the pattern according to what G had recorded, then Erkki transcribed them and we got Julian Thompson, who is the lead ACO cellist, to play the solo.

"If you listen to some of the ballads you will hear this rhythm underneath the singing. You hear it more in the ballads – Marrayarr (Flag) is one; Njarrpila (Octopus) is another – they are unique Australian bass riffs. I would love it if they became part of the Australian musical vernacular. These pieces are legitimately and uniquely ours."

Erkki Veltheim, a Finnish-Australian musician who has been involved with Gurrumul since 2005, scored and transcribed the compositions. "They are my compositions but the inspiration for all the orchestral compositions came from G's initial chanting, which was recorded over several years.

"The other thing that Michael and the rest of us insisted upon was that the yidarki lines, which are dedicated to each of those chants, had to be the starting point for the orchestral compositions," Veltheim says.

"I have to credit Michael for the connection between the chants and minimalism. When Michael explained the idea to me it clicked immediately. It has been a rewarding journey to try and find this new language that combines these two traditions.

"It is a humbling thing for someone like myself to try and understand through my western education what is going on in yidarki patterns which are incredibly complex … when you do get it right and you see G and his family and the people of that tradition on Elcho Island responding … that's when you know you have created something.

"I think Michael's idea … has been to insist on representing the songs as the classical tradition of Australia. I totally subscribe to that. This is the great classical canon of Australia."

Djarimirri (Child of the Rainbow) is released on Skinnyfish Music today.

Elders on Elcho Island have given permission for Gurrumul's name to be used. Michael Hohnen and Erkki Veltheim prefer to use "G", when referring to the artist.

So what if girl was warned not to film Na Ying? Singer should not...

NASA video teases return to Moon and flight to Mars

Journalist Goes To Melanias Hometown For Some Reason, Discovers That People...