In Washington, Miley Cyrus, Ariana Grande, Common, Lin-Manuel Miranda and Ben Platt were among the performers who took to the stage to pay tribute to the 17 lives lost in the deadly school shooting in Parkland, Florida, last month, as well as people impacted by gun violence elsewhere. But plenty of star power was present. Related: Lin-Manuel Miranda, Ben Platt stage powerful duet for March for Our Lives

George and Amal Clooney, who donated $500,000 to the event, marched alongside the demonstrators calling for stricter gun control. The Clooneys were soon followed by other celebrity donors such as Oprah Winfrey and Steven Spielberg. The rapper performed his song "We Could Be Free" at the March for Our Lives in Washington. Afterwards, he spoke to CNN's Dianne Gallagher and told her about how he became politically active after reading Malcolm X's biography. The Parkland shooting, he said, got a lot of attention because most of the victims were white. 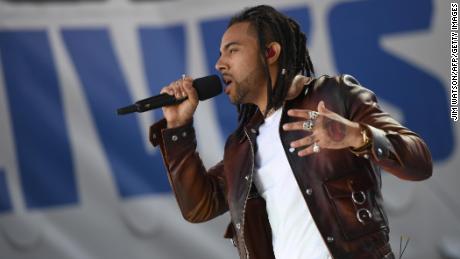 "It's a very American thing, that it takes white victims for people to really listen about gun violence," the 24-year-old said. "But that's what is interesting about gun violence. It doesn't discriminate. White, black, brown, yellow, everybody bleeds red."

Miley Cyrus performed at the march in Washington on Saturday. 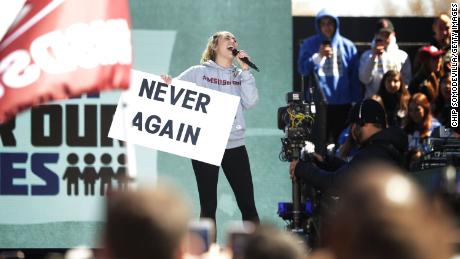 Cyrus sang her song, "The Climb," while holding a sign that read, "Never Again."

Singer Andra Day performed two songs at the beginning of the march, one with fellow musician and rapper Common. In an interview with CNN's Renee Marsh, Day said she believed the march would make a difference. 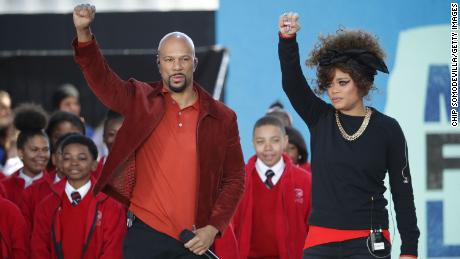 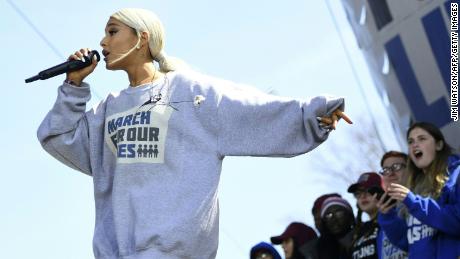 Grande sang her song "Be Alright" and was swarmed by bystanders on the stage for a group hug and selfies after her performance.

Demi Lovato made an appearance in Washington, where she sang her song "Skyscraper." 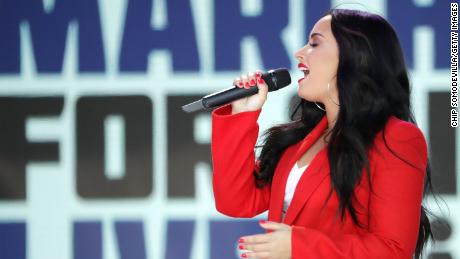 She ended her performance saying, "MSD strong!" and raised her fist in the air.

Hudson closed out the march in Washington by singing a rousing gospel rendition of Bob Dylan's "The Times They Are A-Changin'." 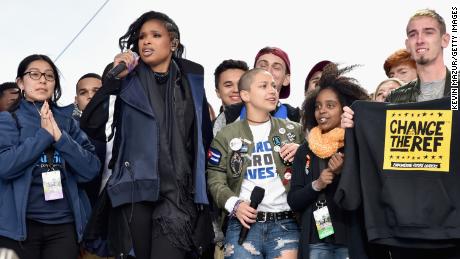 Hudson's mother, brother and nephew were lost to gun violence in 2008. Saturday, she and the student activists from Stoneman Douglas led the crowd in chants of, "We want change!" 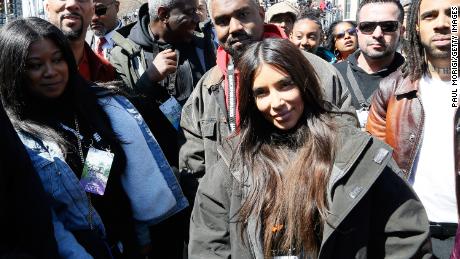 "We stand in solidarity with the survivors & students who are calling for action on common sense gun safety laws at #MarchForOurLives around the country," she wrote.

Singer Paul McCartney marched in New York and spoke of losing fellow Beatle John Lennon to gun violence."One of my best friends was killed by gun violence right around here," McCartney told CNN, "so it's important to me not just to march today but to take action tomorrow."Lennon was shot and killed in New York 37 years ago while walking with his wife, Yoko Ono.

At a rally in Los Angeles, comedian Amy Schumer, an outspoken gun control advocate since a deadly 2015 shooting at a screening of her film "Trainwreck," pleaded for lawmakers to protect children from gun violence. 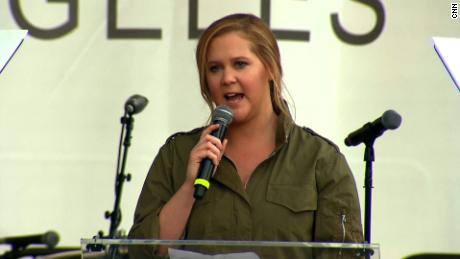 "They call people like me Hollywood liberals — like there's something in it for us," Schumer said, explaining that speaking up about gun control efforts "puts literal targets on our backs." She acknowledged that her position has cost her supporters, but she said she wants to do her part to "keep our children alive.""You see that, politicians? You can make a little less money and be able to look at yourself in the mirror with no blood on your hands," Schumer added.

AstraZeneca hopes the world can focus on its positive vaccine news. But experts fear...

‘Over my dead body’: Giuliani rules out Mueller interview of Trump

Americas Most Prolific Serial Killer May Be Sitting In A Texas...

admin - December 26, 2017
0
TV Guide Welcome to Mega Buzz, your go-to place for the latest and greatest spoilers on your fa..