This was the belief because the FIFA 17 Winter Upgrades went live on February 16th and it was expected EA Sports would stick to the same schedule.

However, with the Chinese New Year coming a little later this year, it seems that everything has been pushed back slightly.

We say this because on Friday, fans didn't get their Ratings Refresh. Instead, players got a mini-event in the form of the Lunar New Year celebration, bringing an assortment of Squad Building Challenges, special pack discounts, and themed kits to Ultimate Team mode.

So where is the Rating Refresh and when could it begin? In truth, there's no official word from EA Sports, but it's possible it could arrive later today.

The Lunar New Year celebration is ending tonight at 6PM, and this could be immediately replaced with the first Winter Upgrades.

Admittedly, it's more likely they'll arrive Friday, but sometimes there's no telling with EA, especially when you consider that some of the Winter Upgrades last year was released on a Sunday (of all days).

Either way, short of some catastrophic event, every FIFA fan should, we believe, find out more about the Winter Upgrades at some point this week.

Stay tuned for more updates and details as they become available! 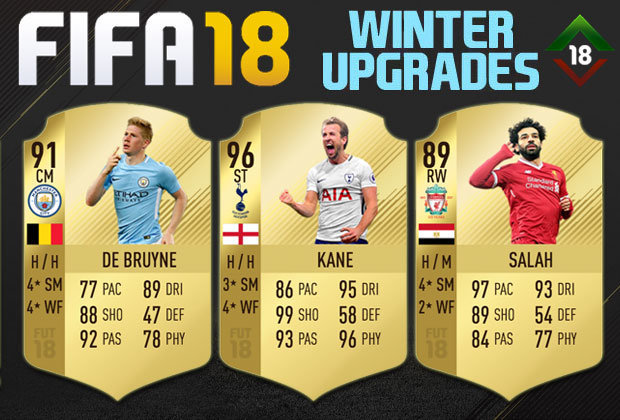 ORIGINAL STORY – FIFA 18 Winter Upgrades are expected to release later this month, with some huge stat boosts planned for players across Europe, including the Premier League, Bundesliga, La Liga, Seria A and more.

The Winter Upgrades are also known as a 'Ratings Refresh', the intention being that EA Sports boost certain players Ultimate Team stats to reflect their consistently excellent real-world performances.

In addition, some stars may find themselves downgraded if they've not been cutting the mustard.

These Winter Upgrades should not be confused with the Winter upgrades for the games FIFA 18 One to Watch players, which is completely separate – but you can read about, here.

EA Sports is yet to reveal the exact launch dates and times for the Winter Upgrades, although it's expected they'll arrive at a similar time to last years update.

Likewise, there are no leaks which might indicate which players are going to be on the receiving end of an upgrade, unlike last year, which saw a huge number of stats leaked in late January.

For the time being though, you can see a prediction of some of the players who could be due an upgrade, courtesy of popular FIFA YouTuber, ZAN 0MG, which while not official, should give players a good indication of the sort of upgrades some stars could see.

Last year, it was believed that EA Sports would begin releasing their new Winter Upgrades around the 10th February.

This seemed pretty nailed on, especially with numerous upgrades leaking online the week before.

However, EA pushed out these upgrades much later, on Friday, February 17, starting with the Premier League.

This was then followed by subsequent upgrades for other leagues around the world in the days and weeks that followed.

Assuming EA sticks to the same schedule, we should see the launch of the FIFA 18 Winter Upgrades on Friday, February 16.

While we can't say for sure that the release pattern will be identical, it's likely that the Rating Refresh for all leagues will be concluded by the end of the month on February 27.

WHICH CARDS ARE UPGRADED?

This part is important and is based on EA sticking to the same system they used last year.

The Winter Upgrades will impact on all forms of cards in the game. That includes Non-Inform Cards, Inform Cards and Other Special Cards which have been previously released, like Team of the Group Stage cards and more.

To help make this as easy to follow as possible, we'll defer to the greater knowledge of FIFA Ultimate Team experts at Futbin.com who've pulled together an easy to follow example using Raheem Sterling's upgrades so far this year.

"Player A has had a fantastic season so far. Their NIF card is 82-rated, their first inform is 84-rated and their second inform is 86-rated. EA announce that Player A will be receiving a +2 increase to his NIF card, moving it up to 84-rated overall.

"From this point we calculate the ratings on these special cards, using the NIF rating of 84 as our starting point. The 84 rated inform moves up to an 86-rated card, while the 86-rated card increases to an 87-rated one. This ensures that nobody loses any value based on these refreshes.

"Here is an example using Sterling’s potential +2 Upgrade. EA would issue a new 84-rated NIF card and upgrade both of his informs like this:"

HOW DO DOWNGRADES IMPACT CARDS?

"Player B has had a really poor season so far, despite an inform from his very first game, they have really disappointed during all other matches.

"Due to this, EA decides to provide a –1 rating during the refresh, changing their 82-rated NIF into an 81-rated NIF card.

"As we mentioned before, Player B currently has an inform which is 84-rated, but luckily for us the refresh on their NIF card has absolutely no effect on any cards currently in the game.

"Nothing here changes except for the rating of the players NIF cards available in packs."

Stay tuned for more information about the FIFA 18 Winter Upgrades & Downgrades throughout February.

admin - August 30, 2018
0
Hollow Knight routinely finds ways to surprise you and regularly delivers more than you might have b..

O2 customers to get credit compensation for data outage

Beyond Netflix and Spotify, what subscriptions are worth keeping in quarantine?

This year’s Call Of Duty is almost definitely Black Ops 4,...