In most developed economies, carbon emissions have flattened out or are trending downward. More efficient technology, a correspondingly lower demand, and an increasing reliance on renewable energy have been changing these countries' energy economies. But China provides a cautionary example of what could happen as other countries join those developed economies: a massive use of coal has caused China's carbon emissions to explode, turning it into the world's largest emitter. While it's possible that China has now started to control its fossil fuel use, having other countries follow China's lead could pose extreme risks to our climate.

That has caused many nervous glances toward Brazil, India, Indonesia, and other countries with large populations and rapidly expanding economies. But there's also an entire continent filled with countries that are developing rapidly and have high populations: Africa. As these economies continue to develop, there's a risk that they, too, could become major sources of carbon emissions. But our understanding of Africa's emissions trajectory is rather limited. To try to correct that, a group of German researchers have obtained detailed information on what's been going on in Africa.

Africa is an enormous continent, with countries at various stages of development. But if you take the continent as a whole, its carbon emissions have risen at about 3.3 percent a year, half the rate of China's in the decade from 2005 to 2015. That's above the global rate for this period, and it's well above that of the developed economies. Sub-Saharan Africa saw a rise similar to China's, and a number of African countries—Angola, Congo, Mozambique, and Niger—saw emissions grow by 20 percent or more a year over this decade. This was only true for a single country outside the continent.

This growth came despite the fact that the energy intensity of economic activity dropped over this period. That was offset, however, by a rise in the emissions per unit of energy consumed.

In 2015, about half of Africa's energy was supplied by biomass (nearly 80 percent in sub-Saharan Africa), which can be largely carbon neutral. Nearly half of its energy-related carbon emissions came from oil used primarily for transportation; about a third were from coal, and another 20 percent came from natural gas. In sub-Saharan Africa, the role of transportation is even more dramatic, with 75 percent of emissions coming from petroleum products, and a tiny eight percent produced by coal.

Nevertheless, coal was the biggest driver of additional emissions over the prior decade, primarily driven by its expanded use in South Africa. Within sub-Saharan Africa, expanded oil use was the largest contributor.

The key question, however, is whether these trends will continue. In many developed economies, wind and solar power are now the cheapest sources of new generation, though it's not clear whether the same is true in African countries at the moment. Many energy projects are also dependent on international aid or loans, and the policies of the organization providing that aid can also make a difference. Finally, given the typical lifespan of generating facilities, projects in the works now could commit countries to increased emissions for decades. 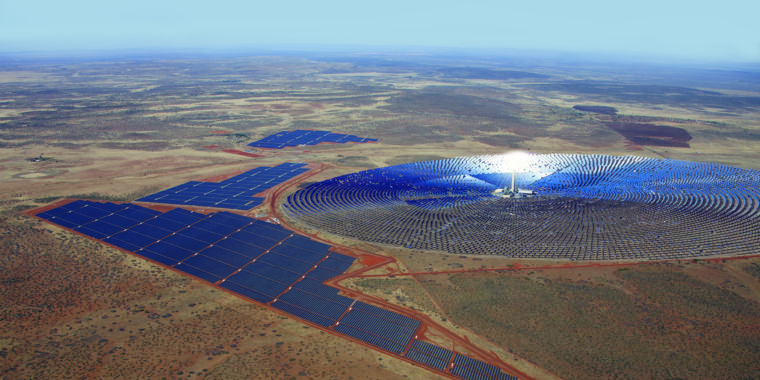 The future emissions trajectory has the potential to be significantly worse. Egypt and South Africa both have plans for more than 12 GigaWatts of new coal capacity. Botswana, Kenya, Nigeria, and Zimbabwe all plan to add more than 2GW. Sub-Saharan Africa as a whole has plans for 16GW, and another 15GW of plans have been developed but are on hold, with no ongoing activity. For a few of the countries, there are domestic coal deposits that would provide a relatively inexpensive source of fuel, and Chinese and Indian companies have been investing in the area heavily.

To take a look at what this could mean, the authors developed two scenarios. In one, all 15GW of shelved projects end up cancelled, and only 30 percent of the planned 16GW get built. While 30 percent may seem low, 66 percent of the coal projects planned globally have ended up cancelled in this decade, and the rate is even higher in Africa. Existing facilities and any new ones are then assumed to operate at 30 percent of their rated capacity, just a bit below the regional average.

In that scenario, coRead More – Source

Emily Atack and Lewis Capaldi were clearly separated at birth as she shares eerie...

admin - May 18, 2018
0
A Florida man on a morning beach jog in Daytona discovered a kilo of cocaine labeled “Porsche” washe..

25 named storms have never been forecast for a hurricane season,...

admin - July 9, 2019
0
By Vinod Dham The rapid expansion of the Internet has created an irreversibly networked world, acce..