In a televised address to the nation Wednesday, Putin announced a sweeping array of measures to cope with the spread of the virus and its widening economic effects."Let's not rely on our Russian luck," he said. "Please do not think, as we often do: 'Oh, this will not touch me.' It can touch everyone. And then what is happening today in many Western countries, both in Europe and overseas, could become our immediate future."Some of the measures were meant to soften the economic blow. Starting on March 28, Russians will have a week's paid leave — to stay home. Russians will see a moratorium on mortgage payments, and enterprises will be given credit holidays. And families entitled to government payments to support multiple children will receive extra monthly payments.But coronavirus has taken on a political dimension for the Russian leader: Putin also announced that a nationwide referendum on constitutional amendments scheduled for April 22 has been postponed until further notice."We'll evaluate the situation and based only on the recommendations from doctors and specialists we will decide on a new date," Putin said.It's hard to understate how important that vote was to securing the Russian president's hold on power. Putin has grasped the reins of power in his country for two decades, but his current term ends in 2024, leaving Russia with a potential succession crisis. Putin's system of managed democracy means that power flows from one man: The president has no serious political competition, his friends and allies control the commanding heights of the economy and Putin is the ultimate arbiter of disputes between elites. The current constitution requires Putin to step down after his current term, meaning that the system he presides over could quickly unravel.The April 22 vote was supposed to remedy that, in typically Putinesque fashion. The country's rubber-stamp parliament rammed through amendments to the constitution that could pave the way for the president stay in power after his current term ends, potentially until 2036. Putin signed the amendments, and the constitutional court endorsed the proposed changes, which must now be put to the popular vote.Coronavirus, then, is a new political battlefield for Putin, and the Kremlin leader preceded his speech Wednesday with a public relations offensive. 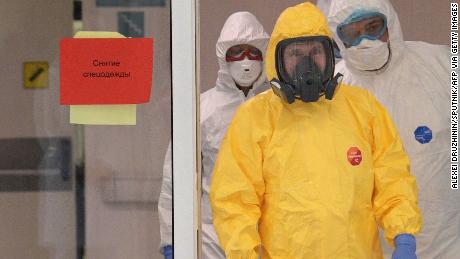 On Tuesday, the Russian leader paid a visit to the main Moscow hospital for monitoring suspected coronavirus patients, donning protective gear to visit the hospital in the city's suburb of Kommunarka. It was the kind of costume play we're used to seeing from the Kremlin, and reminiscent of one of his earliest moves as Russia's acting president: flying to the war-torn republic of Chechnya in 2000 in the co-pilot's seat of an Su-27 fighter jet.Putin cast the current campaign against coronavirus in martial terms."I watched how they [the hospital staff] are working, everyone is at their battle positions," he said, according to a Kremlin statement. "Everyone works like clockwork, good and well-coordinated."Putin wasn't just playing the decisive commander-in-chief for a domestic audience. He also deployed his military as part of an international campaign to battle the pandemic. Over the weekend, the Russian military announced it was deploying a group of 100 doctors and virologists along with disinfection equipment to Italy to assist that country in countering the outbreak. 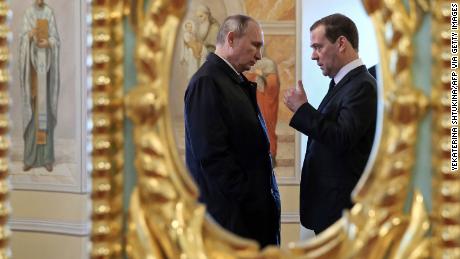 Russian Aerospace Forces Il-76 aircraft departed Sunday from Moscow's Chkalovsky military airfield with Russian military specialists and equipment aboard. The Russian Ministry of Defense posted a photo of one of the transport planes: the fuselage was decorated with a picture of two hearts, one each in the colors of the Italian and Russian flags."From Russia with love," the sign read in Russian, English Read More – Source

The year of the American Woman

admin - May 25, 2018
0
North Korean leader Kim Jong Un is said to be "unruffled" after Donald Trump cancelled their highly ..

Below Review: Deep, Deep Down