US Rep. Elijah Cummings and Stacey Plaskett, the congressional delegate from the US Virgin Islands, signed a letter to House Oversight Committee Chairman Trey Gowdy on Tuesday morning, calling into question a $156 million contract awarded to a small Atlanta-based company, Tribute Contracting LLC. The company delivered 50,000 of the 30 million meals promised in a contract signed October 3, less than 0.25 percent, according to Tribute Contracting owner Tiffany Brown.Amanda Gonzalez, communications director for Gowdy, said the Republican chairman was unaware of the issue until the letter was sent. "The minority had numerous opportunities to bring this to the attention of both our staff and (the Department of Homeland Security)/FEMA during our discussions and briefings on the hurricane recovery efforts, but they failed to do so until a public letter demanding a subpoena," she said.

According to documents that Brown provided to CNN, FEMA terminated the agreement — the largest direct meals contract during the 2017 hurricane season — "due to late delivery of the approved heater meals." The contract was terminated October 23, 20 days after it was signed. "One of the primary reasons FEMA failed to deliver these meals is because it inexplicably awarded a contract worth approximately $156 million to deliver 30 million emergency meals to a tiny, one-person company with a history of struggling with much smaller contracts," Cummings and Plaskett said in the letter. 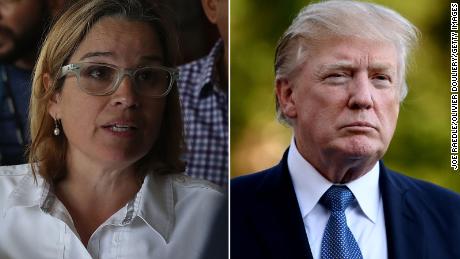 Brown said Tuesday that she has been overwhelmed and plans to sue the government for $70 million."Here is what I can say, I've had challenges with government contracts in the past. The primary reason is financial resources, and lack of support," she said.Tribute Contracting LLC is registered as a one-employee company with an annual revenue of $1,000 on the government's Federal Procurement Data System. Brown, however, said the profile is out of date. Brown admits she did not have sufficient funds to finance the project fully but insists her company was not awarded the contract through any "hookups" with FEMA."I got it because I had a very good proposal and understanding of what was needed," she told CNN. 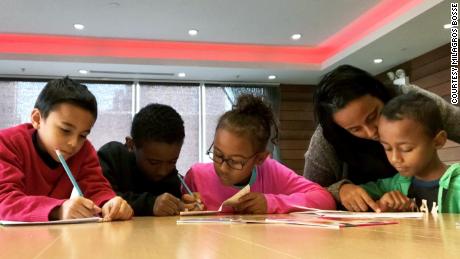 FEMA paid Tribute Contracting $255,000 for the 50,000 meals the company delivered, according to Brown, but she said the payment was not prompt and limited her ability to make on-time deliveries and ramp up production through subcontractors. Brown is appealing the decision to terminate the contract."They need to really shore up their infrastructure for payment for their contractors," Brown said. "If you want someone to provide a service of $155 million, you really should pay or wire transfer within 24 hours or pay a percentage."Under a schedule of supplies in the contract agreement, FEMA indicates 30 million meals should be delivered by October 23. Brown claims there was a verbal agreement for the schedule to "evolve." In an October 11 email to Brown, FEMA states, "There (sic) are asking vendors to delay delivery on all meals for 48 hours. This only includes drivers not in (sic) route. The wait in Jacksonville is extensive."

As the Democrats' letter points out, and CNN confirmed, Brown has had multiple disputes with government agencies in the past.The federal prison system canceled contracts with Tribute Contracting in 2013 and 2014. Brown calls the canceled prison contracts "intentional." She said inflated product prices did not allow her to honor the prices she originally gave the prisons. Moving forward with the contract, she said would have put her in debt. "Sometimes you have to make tough decisions," Brown said of the move not to fight the cancellation. "That's one of them I had to make." The US Government Publishing Office determined Tribute Contracting was ineligible for contracts for the organization until January 7, 2019, a decision that was flagged on a government database online. The decision came after a dispute over production of 3,000 tote bags with US Marine Corps logos. A 2015 inspector general report found Tribute Contracting failed "to comply with explicit requirements of the purchase order with regard to both printing and shipping." The online record on SAM.gov, the official US government system for award management, states that "agencies shall not solicit offers from, award contracts to renew, place new orders with, or otherwise extend the duration of current contracts, or consent to subcontracts in excess of $35,000" with the company. The record goes on to say: "No agency in the Executive Branch shall enter into, renew, or extend primary or lower tier covered transactions to a participant or principal determined ineligible unless the head of the awarding agency grants a compelling reasons exception in writing." Tribute Contracting's ineligibility, however, is marked as only effective within the Government Publishing Office, the reason FEMA argues it does not apply to its agency. FEMA insists Tribute Contracting was properly vetted.Brown said FEMA never asked about the company's prior dispute with the Government Publishing Office."While it would be inappropriate to comment on the pending appeal with the contractor in question, FEMA continues to provide meals to survivors in Puerto Rico," William Booher, FEMA public affairs director, told CNN in an email. "At the time of the contract termination there were ample commodity supplies in the pipeline, and distribution was not affected."On the same day Tribute Contracting's contract was terminated, CNN's reporting indicated relief workers were struggling "to move supplies like food, water and medicine to those in need throughout the island." Bernardo "Betito" Marquez, mayor of Toa Baja, told CNN his municipality of about 80,000 residents in northern Puerto Rico were still struggling with food and water shortages in late October. "We were in the middle of the crisis (on October 23)," he said. "Floods were catastrophic. Those were critical moments."In emails between Tribute Contracting and FEMA that Brown shared with CNN, FEMA took issue with meals that didn't come packaged with heaters required for consumption.In a phone conversation on October 23, recorded and provided by Brown, a man identified the individuals on the other line as "the FEMA crew." According to Brown, FEMA initiated the call to talk about the contract. A woman from FEMA indicates other contractors were turned away for the same packaging issue. "There were vendors who got disapproved because those meals were not together and, to be fair to all vendors, we made sure all meals were together, all heater meals are together," the FEMA employee can be heard saying. "The meal and the heater is in one package because there is no way we expect Puerto Rico to basically go to one box and grab a heater and go to another box and grab a meal. So yes, we asked you to turn them around for the logistics of Puerto Rico and the survivors."FEMA did not respond to CNN's questions about the recorded call. In emails provided by Brown, FEMA also indicated another problem stemmed from "use of an unauthorized subcontractor."According to Brown, Tribute Contracting's initial proposal planned to use a subcontractor out of Canada. When the subcontractor could not meet the deadline, Brown said, she turned to two other subcontractors: Cooking With a Star from an Atlanta suburb and Breedlove Foods Inc. from Lubbock, Texas.On October 19, as 72,000 meals prepared by Breedlove were en route for shipment to Puerto Rico, FEMA sent Brown an email saying, "(D)o not ship another meal. Your contract is terminated." Nineteen minutes later, after Brown tried to remedy the situation, FEMA reiterated in another email, "Again, your contract is terminated." 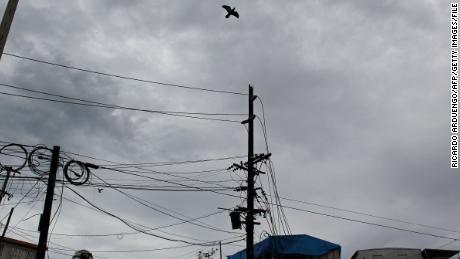 Breedlove Foods CEO Bill Miller told CNN that he still has the 72,000 meals in a warehouse. The nonprofit organization said it has provided food during disaster response in Haiti and Texas. Miller said he has never had a problem such as this and said he believes the cancellation caused delays in getting relief to Puerto Rico. He said he takes issue with Tribute Contracting but didn't elaborate.The other subcontractor, Cooking With a Star, said it had an additional 75,000 meals ready for shipment, and food to prep another 100,000 meals, when the contract was canceled."It became more of a civic duty than anything to help out our brothers in need," Cooking With a Star Owner Kendra Robinson said. "We were all excited about the opportunity to help and be there for Puerto Ricans in the way of food."Brown said she has learned a lot of lessons in working with the federal government. In their letter to Gowdy, Cummings and Plaskett said they worry enough lessons have not been learned in the response to Hurricane Maria. 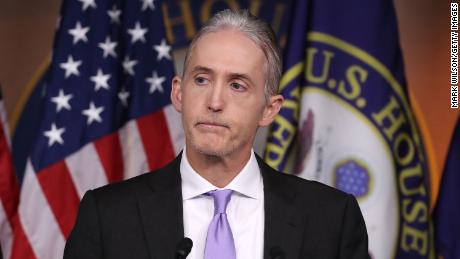 Cummings and Plaskett expressed frustration over a lack of response from FEMA after an October request to the Department of Homeland Security for documents or communications on Hurricanes Maria and Irma as they related to Puerto Rico and the US Virgin Islands. Cummings is the ranking Democrat on the committee.The two Democrats confirmed that DHS provided information on behalf of FEMA but did not include emails or other communications on the subject as requested. In response, a representative for the Oversight Committee, said Tuesday that the panel "has been receiving regular bipartisan briefings from DHS and FEMA on the status of our requests spanning back to our initial bipartisan request on October 11." "At no point — until today's letter — has this concern been raised. While sending a subpoena to cooperating agencies is premature, we look forward to continuing our review of the preparation and recovery efforts relating to the 2017 hurricanes."The next Atlantic hurricane season begins June 1. "There are sufficient commodities both in Puerto Rico and on the mainland to continue to meet identified needs for current or future disaster," FEMA's Booher said. 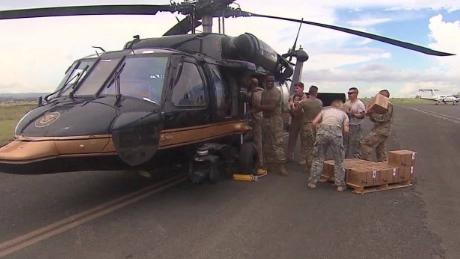 Last week, FEMA was forced to clarify plans to transition from its response phase to recovery mode after confusion about the distribution of supplies in Puerto Rico. FEMA confirmed to CNN it doesn't have any plans to send any new shipments of food or water to the island, but distribution of its stockpile continues. FEMA told CNN the agency has provided 60 million meals to survivors in Puerto Rico, and 4 million meals and snacks remain stockpiled on the island for distribution. "FEMA was slow," said Marquez, the Toa Baja mayor. "But things improved. We are still receiving aid, water from FEMA today." According to the mayor, his municipality now has water, and 85% of residents have power. They have also cleaned up 95% of debris. But full recovery after Maria, as Marquez sees it, will take time. "Poco a poco (little by little)," he said.

USA vs Britain: A guide to Video Assistant Referee review technology during the World...

Bipolar man with a sword dies after being tased by NYPD

What happened to the original iPhones plastic screen?

Was Russia behind a row over anti-Labour tweets?

admin - March 9, 2018
0
Our expert looks at what we can learn from Donald Trump and Kim Jong Un's body language, with t..