Ariana Kukors, now 28, told Department of Homeland Security investigators that Sean Hutchison abused her starting in 2005 and took thousands of sexually explicit photographs of her when she was a minor, an affidavit for a search warrant says. CNN does not normally identify people who make sexual assault allegations. Kukors has made her name public through her attorneys and posted a 4,000-word statement on her website Friday. "I never thought I would share my story because, in so many ways, just surviving was enough," she said in a statement released by her attorneys. "I was able to leave a horrible monster and build a life I could have never imagined for myself. But in time, I've realized that stories like my own are too important to go unwritten."Kukors said she was 13 when Hutchison became her coach at King Aquatic Center in Seattle, Washington. "Kukors claims that Hutchison started (in 2002) the process of child 'grooming,' a practice utilized by child predators to obtain a victim's trust with the goal of sexualizing the relationship," the statement from her attorneys says. Hutchison, 46, said in a statement last month and resent to CNN on Friday that everything he did with Kukors was consensual. They had a "committed relationship" after the 2012 Olympics that lasted more than a year, he said. "I absolutely deny having any sexual or romantic relationship with her before she was old enough to legally make those decisions for herself," he said in the statement, which was provided by attorney Brad Meryhew. "Prior to that time, I did nothing to 'groom' her."He added: "I deeply regret that she would make these wild allegations all these years later." Kukors was a world champion and world record holder in the 200-meter intermediate medley in 2009 and won a world title in 2010 in the short-course 100-meter intermediate medley. She swam on the 2012 US Olympic team in London.Hutchison was the head coach of the US women's team in 2009 and also was one of the Olympic coaches in 2008 at the Beijing Games. 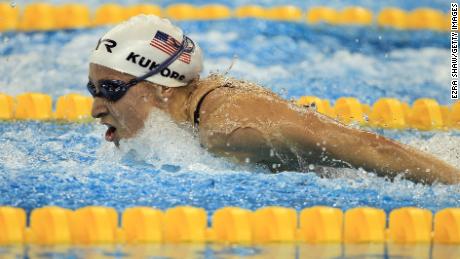 When Hutchison moved to California that year to coach at a training center, Kukors joined the roster of elite swimmers there. Hutchison left Team USA in 2010, but is still a member of USA Swimming through his ownership of King Aquatic Center. The swim club did not return CNN's message requesting comment.DHS searched Hutchison's apartment this week gathering electronic equipment on which they will look for photographic evidence of child pornography.Kukors' attorneys said that, through therapy, she recently became aware that she had been abused. They also said USA Swimming knew eight years ago that Hutchison "was involved in an inappropriate coach-athlete relationship."USA Swimming said it hired a private investigator in 2010 to look into a report of a rumored relationship. It said Kukors, her sister and Hutchison denied there was any relationship.USA Swimming, the governing body that operates the world championship and Olympic teams, said it was notified last month that the US Olympic Committee's Center for Safe Sport has opened a case on Hutchison. USA Swimming sent the center the 2010 case file on Hutchison and Kukors.Kukors has its support, USA Swimming said."Over the last several years, Ariana has worked with USA Swimming as on-camera talent in its digital productions and has truly become a member of the family," the organization said. "We stand by her, and all other victims, in their quest to break their silence and confront their horrific experiences."Kukors alleges the inappropriate contact began as back rubs in hotel rooms when their team traveled to swim meets. It increased to include kissing, fondling and the coach putting a finger inside her vagina, she told investigators.She also says, according to the court documents, that Hutchison began to take pictures of her while she was in the shower and during walks at a state park. "I think back on those times now, tearfully asking why no one helped me . . . why no one stepped in to save me from this monster," she wrote Friday in her website statement. "It's still hard to comprehend, but Sean had perfected the art of grooming; I wasn't even aware I needed saving."She stayed with Hutchison because he convinced her she would have her fastest swim times for him, she says.She wrote Friday that she and Hutchison didn't have intercourse before she turned 18. They were at an out-of-state meet, she writes, when "Sean snuck me into his room to finally give me my 'gift'; I'll spare you the details, but the memory of that night will always haunt me. "CNN called Hutchison's attorney Friday night requesting comment about Kukors' website statement and did not get an immediate response.Kukors called police in Des Moines, Washington — where she once trained with Hutchison — last month to file a report. The Department of Homeland Security became involved because crimes may have been committed in other states and countries.DHS said the investigation is in the preliminary stage."Our top priority in all cases involving alleged online child exploitation is identifying any possible minor victims," the agency said.The Seattle office tip line phone number is 206-442-1469 and the email is [email protected]

‘Vampire child’ buried in Italy with stone in mouth

The Last of Us 2 News: PS4 Multiplayer, Mocap updates ahead...

A man saw a list of his town’s school lunch debt....