The release and subsequent success of the Crash Bandicoot NSane Trilogy set the wheels in motion for the revival of numerous retro titles.

A highly anticipated resuscitation of one of PlayStation Ones most adored trilogies, Spyro has been sat atop a barrage of players wishlists since.

Yes, the fabled purple dragon has undergone the same NSane treatment Crash received, a full revamp that has dismantled the trilogy and rebuilt it from the roots up.

Although shiny and new, at the heart of the game remains the same mellow 3D platforming adventure thats served as inspiration for countless titles since.

For those unaccustomed to the legend of the purple dragon, the Spyro Reignited Trilogy centers around Spyro and his dragonfly companion Sparx.

They swoop, charge and spew flames at all means of villainy across the realms in hope of restoring peace to the home of his furry friends and fellow dragons.

At a mere first glimpse, you are greeted with a profound visual enhancement that breathes a degree of life into the series that previous PlayStation hardware was unable to deliver.

The trio of games is a radiant feast of colour for the eyes. An aesthetic treat for both those revisiting the trilogy and Spyro rookies alike.

Each level has received a flattering refurb that brings depth, buoyancy and does mind-blowing justice to their former PS1 renditions.

Whether you are singeing the grassy plains of the Artisans homeworld or if youre besieged by the purple skies of Glimmer, each environment feels as unique and ostentatious as the next.

Sound design has also secured some TLC and not just in reference to the now reworked, bouncy soundtracks that accompany the many levels youll charge, hop and glide through.

Sound effects like Sparx whizzing around to recover gems and chase down butterflies are remarkably sharp and satisfying. 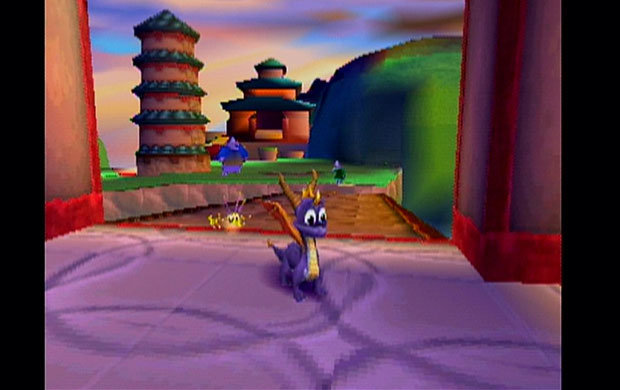 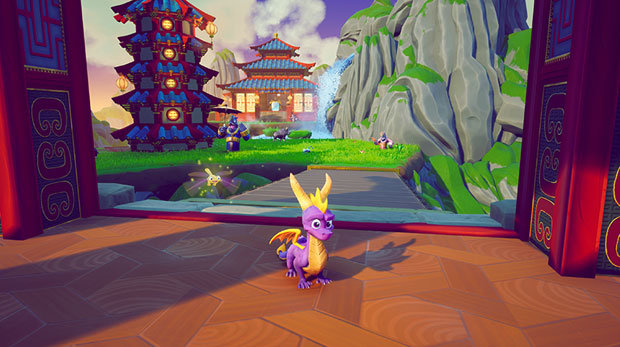 Indeed, breathtaking aesthetics and crisp sound beckon you to explore realms riddled with baddies and thanks to awe-inspiring animation, bounding about as your purple protag becomes completely enchanting.

Fabulous animation brings life and charisma to a gorgeously redesigned cast of characters. The personalities of each are effectively portrayed through expressions and mannerisms like never before.

This is especially true of Spyro himself who is boasting a new look complete with fresh animations that sees him as headstrong and cheeky as ever. Enough to have you stifle a grin yourself. Swooping down from high platforms and locking heads with a series of metal chests feels extremely realistic and responsive in comparison to the originals.

However, in spite of the old school clumsiness thats been mostly rectified, spells of frustration still linger. Charging can feel erratic when used in spurts to take down a huddle of Gnorcs.

In addition, the dive animation that bridges the jump and glide manoeuvres may look awesome but can feel somewhat goofy when negotiating tricky platforming puzzles.

Any hindrance can, however, be weaned out with some practice. It almost serves as more of a throwback thatll leave you feeling like you have Zoe fluttering in your tummy as opposed to the origin of any real discouragement.

If nostalgia isnt set ablaze within you as you traverse the first few levels, theres a retro control scheme that maps out the Dualshock to accommodate the PS1s button mapping. You may also swap between retro and remastered soundtracks

Granted, its heartwarming to reminisce, no dispute here. However, some more dated games possess antagonising gameplay elements that cannot be amended with a remake, arguably suggesting that theyd be better off marooned in generations passed.

Spyro definitely struggles to disguise its age when it comes to mini-games. Long gone are the days of deriving sincere enjoyment from flying through hoops and hunting down collectables in a frantic battle against the clock.

More up to date platforming titles have attempted to phase out getting torched by such tediousness and not without good reason.

If one PS1 classic deserved an enriching remake, our favourite purple quadruped was prime candidate. Thankfully after a painstakingly long wait orchestrated with harmonious thumb twiddling, its safe to say its a venture thats paid off.

The Spyro Reignited Trilogy not only pays courteous homage to one of the most cherished trilogies of all time, but reinvigorates it in a way that allows it to be enjoyed even more. Clunky maneuverability is replaced with deliciously smooth animation thatll have you gawking in awe, ensuring getting lost in this delightful platforming trilogy feels effortless.

Whilst the modern skin on this classic may entice newcomers, interchangeable old-school options present a poignant throwback. This scorchin hot remake will no doubt claw its way to your hearts and leave a nostalgic lump in your throat.

NASA video teases return to Moon and flight to Mars

See all the highlights from the Tony Awards

Sharon Stone’s Most Stunning Looks Over The Years [SLIDESHOW]