LONDON — Misuse of data and “cheating” by Cambridge Analytica and other companies associated with the firm may have altered the outcome of both the U.S. presidential election and the U.K.s Brexit referendum, a company whistleblower told British lawmakers.

Chris Wylie, the former director of research at Cambridge Analytica, which has been accused of illegally collecting online data of up to 50 million Facebook users, said that his work allowed Donald Trumps presidential campaign to garner unprecedented insight into voters habits ahead of the 2016 vote.

He added that a Canadian business with ties to Cambridge Analyticas parent company, SCL Group, also provided analysis for the Vote Leave campaign ahead of the 2016 Brexit referendum. This research, Wylie said, likely breached the U.K.s strict campaign financing laws and may have helped to sway the final Brexit outcome.

“If we allow cheating in our democratic process … What about next time? What about the time after that? This is a breach of the law. This is cheating,” he told British politicians Tuesday. “This is not some council race, or a by-election. This is an irreversible change to the constitutional settlement of this country.”

Wylie said he was “incredibly remorseful” for helping to set up the company. “Nothing good has come from Cambridge Analytica, its not a legitimate business.”

Cambridge Analytica refuted Wylies accusations, saying that it did not inappropriately collect or share data on Facebook users with third-parties. It added that Wylie had been a “part-time contractor” who left the organization in 2014, who did not have any knowledge of the companys workings beyond that date.

“A further independent audit alongside regulatory investigations will confirm this once and for all,” the company said in a message on Twitter. “Theres not much more we can say on the matter.”

Wylies comments to a parliamentary committee come as global anger continues to rise on how peoples Facebook and other online data may have been misused as part of political campaigns from the United States to Kenya.

Mark Zuckerberg, Facebooks chief executive, took responsibility for potential shortcomings in a message posted on the social network last week. Three U.S. congressional committees have already called on the 33-year-old to testify on his companys involvement in the ongoing data scandal. The social network denies any wrongdoing.

British politicians also demanded that Zuckerberg give evidence in the countrys ongoing investigation into the matter, but Facebooks chief wrote to Damian Collins, the chair of the U.K. parliaments digital, culture, media and sports committee, to say that he would not give evidence.

Instead, either Chris Cox, Facebooks chief product officer, or Mike Schroepfer, the companys chief technology officer, is expected to testify to British lawmakers sometime next week, according to U.K. officials.

“We would still like to hear evidence from Mark Zuckerberg as well,” Collins said Tuesday.

Over four hours of testimony, Wylie gave insight into how Cambridge Analytica was able to build complex data analysis tools to target potential voters during multiple U.S. campaigns. That included ties to Aggregate IQ, or AIQ, a Canadian company which helped to develop the underlying algorithm that was used by Cambridge Analytica to target Facebook users. Both companies deny such a connection.

“The projects I was working on may have had a larger impact than I first expected,” said Wylie, who worked for SCL Group, Cambridge Analyticas parent company, for about one and a half years. “Its categorically untrue that Cambridge Analytica has never used Facebook data.”

The former employee also outlined how AIQ was used by the Vote Leave campaign to target British voters ahead of the Brexit referendum. 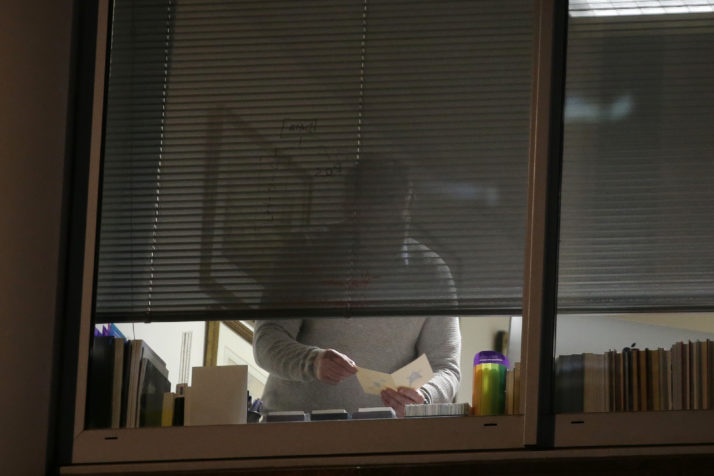 A man looks through papers inside the offices of Cambridge Analytica in London on the evening of March 23, 2018, just hours after a judge approved a search warrant of the offices | Daniel Leal-Olivas/AFP via Getty Images

Questions have been raised as to whether payments to the Canadian company may have broken British campaign financing rules, though both the company and Vote Leave deny these allegations.

Still, Wylie said, the use of such data analytics by campaigns linked to leaving the EU had a material effect in convincing many people how to vote. He added that he would have voted to leave the EU if he could have voted, and his evidence was about protecting the U.K.s democratic system, and not about overturning the 2016 vote.

“I think its incredibly reasonable to say that AIQ played a very significant role in Leave winning,” he told British lawmakers. “My question is where did they get the data? How do you create a massive operation in a country where AIQ had not worked before?”

Wylie also gave insight into how Cambridge Analytica was created in late 2013. The unit was set up by Robert Mercer, a U.S. billionaire; Steve Bannon, a former campaign manager for Trumps 2016 campaign; and Alexander Nix, Cambridge Analyticas chief executive, who was suspended following the most recent allegations.

To give it an air of academic credibility, according to Wylie, the founders wanted to play up potential research ties with Cambridge University. Aleksandr Kogan, a American-Russian professor at the university, created a smartphone app that provided Cambridge Analytica with reams of digital information on roughly 50 million Facebook users. These data transfers, according to Facebook, broke the social networks terms and conditions.

“Whenever Steve Bannon would come into town, we would set up this fake office to present a more academic side of the company,” Wylie told the MPs. “Steven Bannon said we should call it Cambridge Analytica because of its close association with the university.”

When asked by a British lawmaker if the data-mining company had any ties to Cambridge University, Wylie added: “There was nothing formalized with the university. It was done professor to professors. It sat in a grey area.”

Chance The Rapper: Black People Dont Have To Be Democrats

What parts of London are popular with superstar musicians?

admin - April 11, 2018
0
Aurich Lawson In light of Internet and social-media privacy landing at the top of major news outlets..