Promoting empathy and cracking down on hypermasculinity may help the Department of Defense to reduce unwanted sexual behavior and improve combat readiness, a new government report on sexual violence in the military says.

The report pointed out that “interconnected, inappropriate behaviors” are part of a “continuum of harm” that creates a climate conducive to sexual harassment, assault and violence. The National Defense Authorization Act (NDAA) for fiscal year 2017 expanded the definition of sexual harassment in the military beyond sex discrimination, to make it “an adverse behavior on the spectrum of behavior that can contribute to an increase in the incidence of sexual assault.” Both the Pentagon and the separate service branches have yet to update their policies to reflect this new definition, the GAO found.

The report also urged the Pentagon to incorporate the guidelines for preventing and dealing with sexual violence developed by the Centers for Disease Control and Prevention (CDC).

The Pentagon is ignoring risk factors identified by the CDC such as “alcohol and drug use, hypermasculinity, emotionally unsupportive family environments, general tolerance of sexual violence within the community, and societal norms that support male superiority and sexual entitlement,” the report says.

Also ignored by the DoD are protective factors such as “emotional health and connectedness, and empathy and concern for how one’s actions affect others.”

Noting that the DoD instructed the services in 2014 to develop mechanisms for reporting incidents of sexual harassment anonymously, the GAO said that such mechanisms are not yet part of the department-wide sexual violence policies. 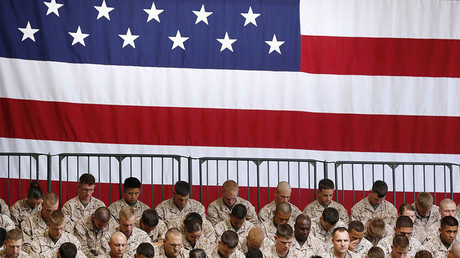 Additionally, each service branch uses a different database format to record formal complaints of sexual harassment ‒ the Navy uses Excel spreadsheets, for example. While the GAO does not go as far as to recommend a single database, the report does advocate “improving and standardizing data collection” so that the Department of Defense can “further develop its understanding of the connection between unwanted sexual behaviors.”

Having a single standard across service branches would also be helpful, the GAO report says, noting that the US Marine Corps (USMC) updated its standards of conduct in May. The USMC made the change in response to the “Marines United” scandal, where current and former members posted nude photos of female recruits in a Facebook group, along with disparaging comments. While the Marines now consider posting nude photos of others without consent to be harassment, other service branches do not as of yet.

The GAO report comes at a time of renewed interest in sexual harassment in the US. Accusations of improper behavior have forced a number of Hollywood celebrities, media executives and members of Congress to resign or be removed from public life.

In 2015, the Obama administration lifted restrictions on having women in combat roles and set a deadline for allowing openly transgender troops to serve. In July this year, President Donald Trump said he would not allow transgender people to serve “in any capacity,” citing “tremendous medical costs and disruption” to the military. The matter is currently being fought over in the courts.

So far, only men are required to register for potential draft (“Selective Service”) under US law. Attempts to expand the requirement to women have failed to get enough votes in Congress.

BTS is the biggest band you’ve never heard of. That changes now

Solo: A Star Wars Story trailer tries to reassure us the...

This is how US police gear up to keep the peace

admin - August 4, 2020
0
As the United States continues to see widespread protests, images of unrest and accounts of violence..