Angela Merkel will have to tread carefully on her visit to China this week to avoid tripping over Hong Kong and stepping on Germanys car industry.

The German chancellor faces pressure to stand up to Beijing on issues like democracy in the semiautonomous Chinese territory, but she also doesnt want to alienate the Asian powerhouse on which her countrys major industries depend at a time when Berlin faces the prospect of a recession as well as auto tariffs from Washington.

The approach she takes could also put her at odds with a broader push for a tougher, united EU front against China, which Brussels in March deemed a “systemic rival.”

“The visit comes amid difficult circumstances,” said Mark Hauptmann, a lawmaker from the chancellors conservative Christian Democrats (CDU). “[Germany and China] are economically very dependent on each other. This makes it more difficult to address critical issues that need to be addressed.”

Especially sensitive is the issue of Hong Kong, where tensions between authorities and protesters have escalated over weeks of at times violent demonstrations pushing for greater democracy for the city. Ahead of her visit, Hong Kong activists on Wednesday appealed directly to Merkel to “express concern” over the situation and to “convey our demands to the Chinese government.”

“Perhaps the biggest danger to a united European position on China will be how Berlin is going to position itself now” — Mikko Huotari, deputy director of the Mercator Institute for China Studies

But observers say Merkel could opt for a soft approach to Beijing given the larger economic context. Data released by the German economy ministry on Thursday showed that the countrys industry recorded a significant decline of orders by 2.7 percent in July in comparison to the previous month.

“Perhaps the biggest danger to a united European position on China will be how Berlin is going to position itself now,” said Mikko Huotari, deputy director of the Mercator Institute for China Studies. “Theres clear pressure from big companies not to alienate China too far and instead say: Lets get back to business.'”

Alicia García-Herrero, a senior fellow at the Bruegel think tank, also warned of a threat to the joint EU approach. “I hope Europe wont lower its expectations [on Chinese reforms] because of bilateral negotiations between China and Germany,” she said during a panel debate in Brussels on Wednesday.

A similar warning came from Paris: “What Europe needs is a strong, coherent, collective approach to China, and what were getting in reality is more of a piecemeal approach at the European level with each member state pursuing its own interests at the bilateral level,” said John Seaman, a research fellow at the French Institute of International Relations (IFRI).

Before heading to China, one senior government official conceded that Berlin and Beijing enjoy a “complex bilateral relationship,” part of an ongoing discussion on market access and trade. 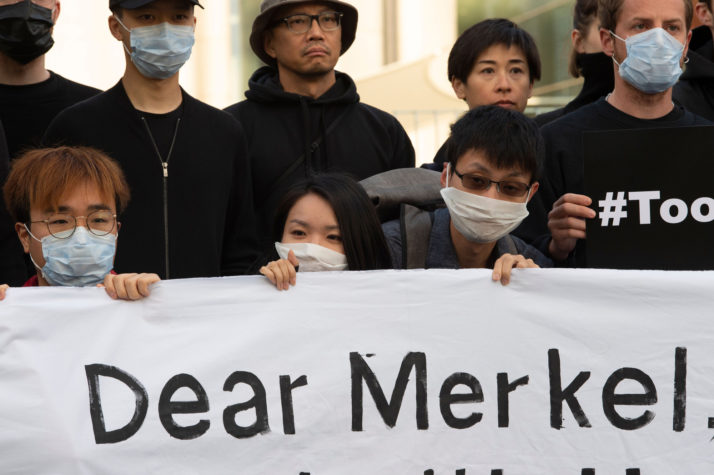 Protesters hold a vigil for democracy in Hong Kong in front of the chancellery in Berlin on September 5, 2019 | Paul Zinken/AFP via Getty Images

Das Auto in the drivers seat

German automakers have a lot to lose in China, where producers such as Volkswagen, BMW and Daimler churn out millions of vehicles a year.

Since 2010, German automotive companies have expanded their production base from eight factories in China to 30, looking to capitalize on the worlds largest car market. Sales for the countrys producers have ballooned from 2 million units in 2010 to 5.2 million in 2018, around a fifth of the overall Chinese market, according to figures compiled by the German Association of the Automotive Industry (VDA).

Underscoring the importance of Merkels trip for German industry, demand for seats on the government jet leaving Berlin on Thursday was overbooked. Those onboard will include senior managers from everything from car firms to energy companies and financiers, a government official said.

A significant portion of German car sales in China are satisfied by in-country production: Just 290,000 passenger cars were actually exported from Germany to China last year. But some 150,000 cars were shipped from German auto plants in the U.S. to China, leaving Germany vulnerable to the escalating Sino-American trade conflict.

After years of increases, sales in China recorded a modest fall last year — and thats not just because of the “enormous transformation process” toward electric cars and autonomous driving, a VDA official said.

“The main point is the trade policy. The weak point of the Chinese market is not that they dont want to buy cars. Its over the trade struggle with the U.S.,” the official said.

Merkel urged U.S. President Donald Trump during last months G7 summit to try to reach a trade truce with Beijing, and shes expected to do the same over dinner with Chinese Premier Xi Jinping on Friday.

Seaman from the French IFRI think tank said the push for a European investment agreement with Beijing could help Merkels de-escalation push. The EU is hoping to get China to commit to market openings and granting EU investors guarantees that they wont be treated worse than Chinese companies.

“If Europe were able to obtain concessions from China on many of the issues that have irked both Europeans and Americans, it could offer a face-saving way for China to move forward with reforms without appearing to give in to pressure from Washington,” Seaman said.

German officials say Merkel indeed plans to promote the investment protection agreement while in China. Negotiations for this deal have advanced slowly in recent years because of Beijings reluctance to open its market to foreign investors, and another round of talks is set for later this month.

At the last EU-China summit in April, both sides agreed to make “decisive progress” this year, and officials said Merkel aims to finalize the agreement — which would also be a boon for German companies — in the second half of 2020, when she plans to host a China summit with other EU leaders when Germany takes over the rotating presidency of the Council of the EU. 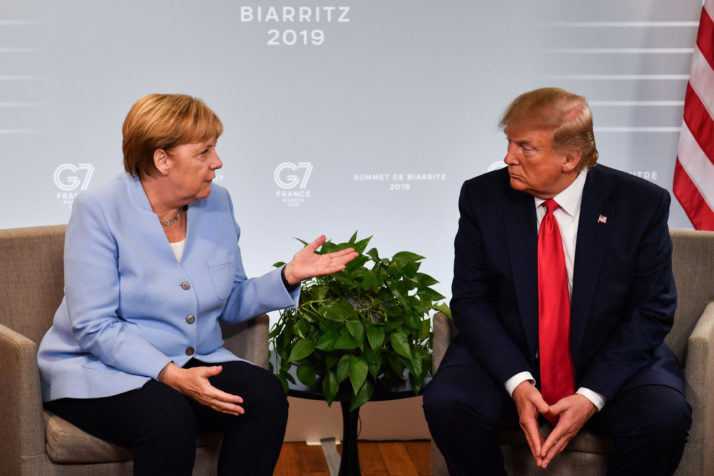 “Now is the time to tell China: Especially in times of a weakening economy in Germany, you have to open up more and create new opportunities and markets for European companies,'” said Jörg Wuttke, president of the European Chamber of Commerce.

Merkels visit also comes amid debate over a push to create European champions that can battle state-backed heavyweights in global markets, especially those from China. Over the past year, Berlin has gradually swung behind the push, led by French President Emmanuel Macron, to reform EU comRead More – Source

Air passenger traffic is down, but TSA is still finding a lot more guns

admin - April 17, 2018
0
Kendrick Lamar became the first rapper to ever receive a Pulitzer Prize for music Monday, The 30-ye..

‘Sex and the City 3’ planned to kill off Mr. Big

Trump accused of ‘reaching new lows’ with tweets about migrants

admin - April 1, 2019
0
MEPs have voted in favour of controversial changes to online copyright across the EU, in a decision ..