The Assassin's Creed games have always been well-known for being quite loyal depictions of history.

Granted, the creative teams behind the titles take some artistic liberty when it comes to recreating ancient cities, but largely Ubisoft commits a lot of research to recreating its various settings.

From Ancient Egypt to Renaissance Rome, revolutionary Paris to Victorian London, Assassin's Creed has charted history in some very inventive ways, always being vaguely educational in the process (though that was usually a background for the adventure gameplay for the most part).

With a free new add-on coming to anyone that already owns Assassin's Creed Origins on console, Ubisoft is really showing off all the research that went into the making of its newest, rebooted effort.

The new Discovery Mode strips away all combat from the game and instead takes you on guided, narrated tours of the in-game world, explaining a wealth of subjects to you as you explore the lush environments.

The Discovery Tour is an educational experience that allows players to free-roam Ancient Egypt to learn more about its history. 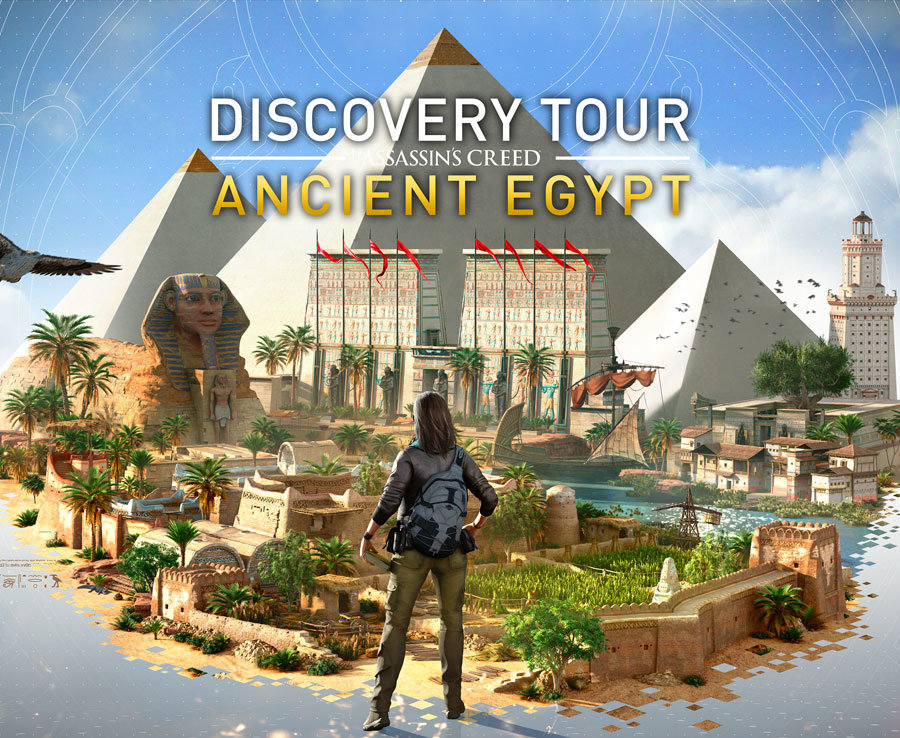 From tours based on the everyday life of an ancient Egyptian civilian to guided explanations of Giza's pyramids, every aspect of the Egyptian world can be explored in the stress-free environments Discovery Mode offers you.

At a preview event, we took a saunter around the necropolis surrounding the pyramids, learning that many of the workers that built the massive structures ended up buried nearby.

Then we slowly sailed down the Nile, learning about the local flora and fauna, all voiced by a well-spoken, engaging narrator. If we ever wanted to learn more information, all we had to do was hit a button and we were fed more information.

If you're a real empiricist about your facts, the majority of what you're being taught comes with sources, too: you can read up on where Ubisoft acquired this knowledge on a whim.

The tours aren't just slapped together thoughtlessly, either: you play through them as any in-game character you choose (yes, even the modern day characters) and follow a path explaining things to you in great detail.

The tours were written by academics and passed onto Ubisoft to make interactive and appealing to gamers – this is the closest thing you're going to get to genuine museum exhibits in a videogame.

This is a must-try add-on for the game.

Over 75 guided tours await you – and it's all free on PS4 and Xbox One, too. Curated by professional Egyptologists, covering content from the city of Alexandria to the Sphinx (which has a really interesting hidden history, by the way), Discovery Tour is a statement of intent from Ubisoft.

It shows the developer is committed to Origins, that the team behind the game is super proud of the product it's released (as well it should be).

We also massively appreciate how transparent the studio has been about what is has changed from history, and why it's done so for gameplay reasons. Anyone curious about game design can read up on what Ubisoft decided to change and why – a nice window into the development process.

Being able to explore so many different parts of the game in such detail shows a massive confidence from Ubisoft, and one that is well deserved. If you're a parent considering buying this game for your child and don't mind a little bloodshed in the main game proper, this is one of the most fantastically produced educational tools we've seen in gaming.

It could very well be a watershed moment in gaming as a new tool for education.

Assassin's Creed Origins Discovery Tour releases on February 20th for free on console versions of the game, with a standalone experience coming to PC later.

Life after lockdown: Will our social habits be changed forever?

Unsigned note left at the Ahmaud Arbery memorial: ‘I am so...