Assassins Creed Odyssey is – so far – our favourite game in the series.

On a top level, the title manages to combine all the things that have made the series great to date – exploration, combat and a fun historical context – and update it with new additions that make Odyssey one of the most robust RPG offerings this year.

Assassins Creed Odyssey has gone beyond last years Origins game by giving players more depth in terms of story, placing the shape and direction of the plot squarely in your hands.

At first, you think this is just another superficial mechanic layered on top of the rich tapestry of activities in the game, but as you progress into the first 10 hours of the game, you start to realise just how much of a revelation RPG mechanics in an Assassins Creed game are.

At the risk of spoiling any of the major story beats in the game, we wont talk about specific actions and their consequences in the title – but rest assured, the more you deviate from doing good things in the game, the more youre going to be punished.

Towards the end of our time in Odyssey, it became very clear to us that quite early on wed sealed our fate and locked out a certain ending… so be aware that its not just marketing talk when Ubisoft says your choices really do matter.

So the story is great, and the RPG elements in the game elevate the series to a height its never been before. But what about the rest of the game? Ubisoft titles have been criticized for being piecemeal and all over the place in the past, littered with quests and activities that make everything feel unconnected and bloated.

Odyssey circumvents that issue by making most things you do in the world relate directly to your central task: playing as a mercenary torn between Sparta and Athens, lending your services to both sides as you hunt down answers about your family, your lineage and your purpose.

Any fort you clear, and location you complete, and camp you decimate – all of it plays into a power mechanic that each of the games myriad regions operates on. Kill enough Spartan officers in one area, for example, and you can weaken Spartas grip on the location, potentially triggering a war-like encounter where you have to fight for your chosen side.

These setpieces are a fun addition to the game that give the new combat abilities in the title a real chance to shine (and make you feel like a certified badass in the process).

The game being so big, though, makes the Conquest battle feedback loop feel a bit repetitive when you get to about 30 hours into the game, but thats OK. Theyre rare enough to avoid if youre bored of them, and only rarely essential to story progression. They also offer sweet gear drops, so thats an incentive in itself.

The world is huge. Honestly, its massive. As a result, there are areas that appear vaguely uninteresting or similar to places youve been before, but that is more than outbalanced by the absolute beauty of the world.

During our time with the game, wed stop often and just pan around our chosen character (we opted for Kassandra, and recommend that you do the same – her voice acting and character rigging are honestly the best the series has ever seen).

Taking time to drink in the rich Greek scenery and admire the lighting engine that underpins this whole game honestly feels like a mechanic in and of itself. It bolsters the exploration side of the game – on more than one occasion we went out of our way to get to a new Synchronisation location, just to ogle the view.

This is peak Assassins Creed, and honestly, we couldnt be more impressed with it. 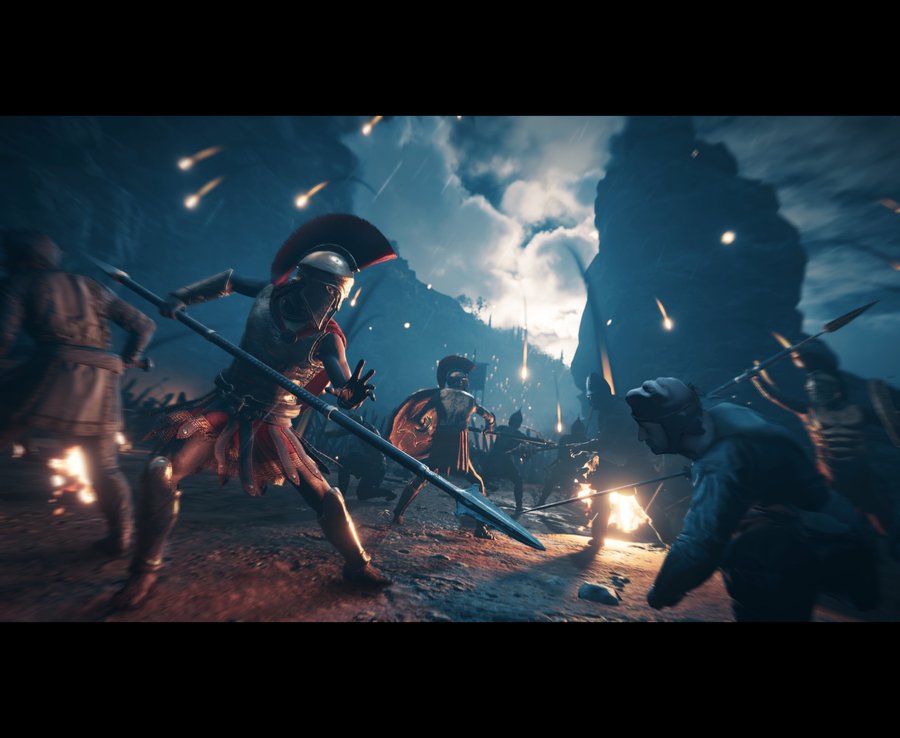 When youre not out and about weakening regions or exploring the view, you can engage with sailing on your fully customisable and upgradable ship. This changes up the rhythm nicely and is required for significant parts of the story, linking chapters together.

Its a fun change of rhythm and keeps the open world fatigue at bay by offering an elegant halfway point between fast travel and slogging from one side of the map to another.

The only pacing issues we had with Odyssey were the same ones we had with Origins: the level-gating is so intense that if you encounter an area of higher level enemies – even as part of the story – you have no realistic chance of overcoming them.

As a result, the game sort-of forces you into incidental quests in the world and into its side missions. Thats fine – the side missions and characters you meet therein are actually one of our favourite elements of this game – but for anyone focussed on the main story, it may be frustrating.

For our review, we had to mainline story content and only experimented with side missions when we could – however, in a natural setting and taking this game at your own pace, chewing on bits that youd like and tackling others elsewhere quickly – this may not be that much of a problem.

Assassins Creed Odyssey does a great job of highlighting everything the series has to offer, and introducing some amazing new elements, too.

We sincerely hope the RPG elements of the series are here to stay, because we frankly dont want to play another Assassins Creed game without them – it makes that much of a difference.

Some pacing issues aside, and some cookie-cutter elements in Assassination target notwithstanding, Odyssey is a great, engrossing game that feels like a worthy evolution to the Origins reboot.

Odyssey demonstrates Ubisofts reluctance to rest on its laurels and deliver the same thing with a different skin. Odyssey has surpassed our expectations and established itself as one of our most enjoyed games of the year so far.

‘Green Book’ director apologizes after reports of past misconduct

‘Got a bad feeling from him’: Cate Blanchett accuses Harvey Weinstein of being inappropriate...

Remember ‘Daria’? MTV wants to bring her back

admin - June 22, 2018
0
The network on Thursday announced it is bringing back "Daria" in the form of a new series, tentative..

Ticket to Write: Mojave city tells stories of traveling in past,...

No evidence of engine failure in helicopter crash that killed Kobe...