Amazons runaway success during the coronavirus pandemic has brought the firms valuation to new heights, but there is likely to be a price to pay: tougher scrutiny from regulators.

Of all the big Silicon Valley tech companies, Amazon has fared among the best during the crisis as it continued to supply goods to millions of locked-down consumers around the world. While profits slipped to $2.5 billion in the latest quarter, the firms share price has boomed, bringing its market valuation to about $1.17 trillion, or just shy of the size of the entire Spanish economy.

But even as Amazon has thrived, hiring 175,000 workers as millions lost their jobs in the wider economy, it has struggled in PR terms. Anger over safety conditions in warehouses, a fight with the French court system, and the public resignation — accompanied by a public letter — of a senior Amazon Web Services executive have kept the company in a downbeat news cycle, even as other web giants used the crisis to try to burnish their public image.

“Amazon still has the opportunity to lead, but people will remember how they treated workers after the pandemic is over,” said Emily Cunningham, a former Amazon user experience designer who was among the employees fired in April.

The next shoe to drop for Amazon is likely to be tougher oversight. Beyond the battles with unions, what the crisis has brought home on both sides of the Atlantic is Amazons crucial economic role — a realization that is set to help the case of lawmakers arguing the company has grown too powerful and should be subject to antitrust action.

In response to questions from POLITICO, an Amazon spokesperson said the firm expected to come under scrutiny as a result of its success.

Since the pandemic hit, U.S. lawmakers have demanded that Amazon CEO Jeff Bezos testify on whether the company has misled Congress about rival data misuse. Italys competition authority launched a probe over coronavirus price-gouging and the New York attorney general launched an investigation after Amazon fired an activist worker.

While more than half of Amazons earnings come from AWS, its cloud services, its the firms online marketplaces that are currently receiving the most-focused attention.

In Brussels, the European Commission has a competition probe open against Amazon. Legislators are also examining new rules and responsibilities for online marketplaces including Amazon, marking a shift away from their previous almost exclusive focus on social media. The EUs upcoming Digital Services Act, a package of legislation for platforms, could target not only Google, Facebook and Twitter, but also Amazon.

“On Place Flagey [in Brussels], products are safe, authorities are on top of things. That will also have to be the rules of the game when we do e-commerce,” Commission Executive Vice President for Digital Margrethe Vestager told the European Parliament on May 4, referring to one of the EU capitals most famous marketplaces. “Thats the ultimate goal of the Digital Services Act.”

In response to questions from POLITICO, an Amazon spokesperson said the firm expected to come under scrutiny as a result of its success.

“We understand that with success comes scrutiny, and our job is to build a company that passes that scrutiny with flying colors. We face intense competition in every segment in which we operate, and we love that competition because it makes us serve customers better,” the spokesperson said.

Analysts suggested that Amazon had been slower than other tech giants to gauge the public mood.

“They have been doing a lot of Amazon business-as-usual things,” said Margaret OMara, a Silicon Valley historian and history professor at the University of Washington. “They have to realize that the environment has changed. It will be important for Amazon not to be a villain.”

One sore spot for Amazon has been conditions at its warehouses, or “fulfillment centers,” and conflicts with unions. In France, where Amazon runs six warehouses, a lawsuit brought by unions led to a court defeat for the company, which shuttered all of its France-based operations until at least May 13. The e-commerce giant said Thursday it was taking the case to the French supreme court.

In turn, the union battles have brought more attention onto the way Amazon interacts with employees who criticize the firm. In a public letter posted this week, a former vice president of Amazon Web Services, Tim Bray, criticized what he said was “a vein of toxicity running through the company culture,” after Amazon fired two employee climate activists and a worker who raised concern about the safety conditions in warehouses. Amazon said the fired workers had violated internal company policies and declined to comment on the VPs resignation.

“Part of what has made Amazon great as a company is the fact that theyre so analytical, data-driven and frugal,” said eMarketers Andrew Lipsman. “Sometimes they have a tendency to drive too hard on those dimensions and not see the bigger picture that there are a lot of constituencies that need to be accounted for.” 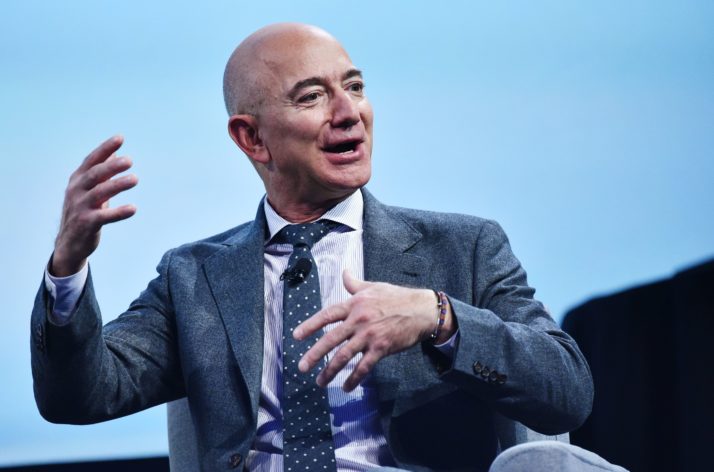 The crisis has sped up unionizing efforts, which increasingly are linked beyond borders — via groups such as the Amazon Employees for Climate Justice and, since 2015, Amazon Workers International.

Maria Malinowska, who works as a packer in Amazons fulfillment center in Poznan, Poland, said that the pandemic allowed unions to “make international demands.”

“Amazon makes decisions on a global level, so it is very important for us to organize at an international level,” she added.

In response to the criticism, Amazon has insisted that its warehouses are safe. It has set aside more than $800 million for coronavirus-related safety measures including masks, hand sanitizer and thermal cameras, and Bezos told shareholders in late April the company would earmark $4 billion in expected profits in the next quarter for COVID-19 expenses, including to buy personal protective equipment.

Whether Amazons image issues will have an impact on its business remains to be seen. “There is a paradox between what people might think of Amazon and their [shopping] behavior,” said Vincent Mayet, general director at public relations firm Havas Paris and author of a book on the company.

But the more powerful Amazon grows, the greater the regulatory scrutiny.

A recent Wall Street Journal report about Amazons alleged misuse of seller data to launch competing products has renewed calls in Washington for antitrust action. (The company said such practices are not allowed and that it had launched an internal investigation.)

In Brussels, the European Commission is drafting new competition rules in the Digital Services Act package that would apply to platforms acting as “gatekeepers” for the online world and could target Amazon.

“We were already looking at Amazon before the crisis. But when entering into a financial and economic crisis, as will be the case as a consequence of the coronavirus, its even more important to create fair rules in the [European] internal market,” said Christel Schaldemose, a Danish member of the European Parliament who co-drafted last year legislation on the relations between platforms such as Amazon and their business users.

Policymakers in Brussels have turned their attention also to online marketplaces and how they can be vectors for unsafe products.

Others want to go further — by classifying platforms including Amazon as utilities. Barry Lynn, director of the Open Markets Institute, a U.S. think tank critical of Big Tech, argues that Amazon has become an essential service to some.

Monster Boy And The Cursed Kingdom Review – Fit For A King

Věra Jourová: Platforms need to open up algorithms to deal with disinformation

‘Dragonfly’ drone to search for ‘building blocks of life’ on Titan

admin - June 29, 2019
0
NASA is sending a rotorcraft to Saturn's ice moon Titan to continue its search for the "buildin..

Believe All Women! — Trump Jr., Other Conservatives React To Avenatti...

The best Cyber Monday 2018 video game deals for the UK

Rallies in Spain after 5 men cleared of rape in ‘wolf...