A total of 14 people were involved in the incident, 10 of whom were referred for "appropriate discipline," Syverud added. Nine were students from other schools and have been referred for discipline at the schools they attend."The entire case has also been referred to the Onondaga County District Attorney," Syverud said while briefing the university's senate. "The New York State Police's hate crimes task force has been partnering with us and we're working with the New York State Division of Human Rights on this matter."Syverud also said reports of white supremacist material being sent by AirDrop to various students Monday night at the Bird Library was probably a hoax. AirDrop is an app that lets users share files between Apple devices via Bluetooth or Wi-Fi."To date, law enforcement has not been able to locate a single individual who directly received an AirDrop. Not one," Syverud said. "It was apparent that this rumor was probably a hoax, but that reality was not communicated clearly and rapidly enough to get ahead of escalating anxiety."Syverud also noted that a total of 12 cases of racist and anti-Semitic graffiti have been found on or next to Syracuse's campus to date.

Chancellor points to treatment of his family

Syverud spoke emotionally about his own experience fighting for affirmative action, holding back tears while talking about how his family was treated in the South."I spent six years of my life publicly fighting to permit affirmative action in higher education admission based on race, leading to the Supreme Court's decision. I did this while raising a mixed-race family in the South.""My kids were threatened … my wife was subjected to many racial epithets," Syverud said, his voice cracking. "Their car tires were slashed, my kids' dog was shot. There was little investigation, those responsible were never found. That was then, that was the South. It was hard for my wife, it was hard for my kids. But this is Syracuse. This is 2019. I do not accept this hatred here and now, this is not who Syracuse is at its best, and is not who we can let ourselves become.""We just cannot let our students of color, our Jewish students, our Asian students, or any of our students, or faculty and staff, be afraid on this campus because of who they are," Syverud added.

Students walk out of school forum

Students walked out of a community forum at the university Wednesday night after Syverud said he couldn't promise that all student demands would be met "this instant." 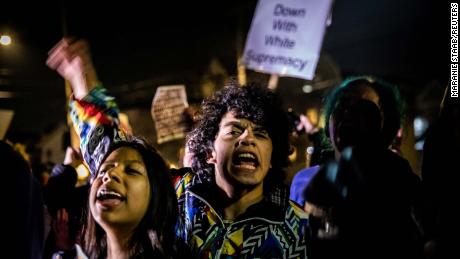 The students previously gave officials a Wednesday deadline to address their 18 short and long-term demands for changes in how the university handles racial incidents. The demands include requiring faculty and staff to undergo diversity training, establishing a housing portal where students can select roommates based on mutual interests and identities, and allocation of $1 million for the creation of a curriculum "thRead More – Source

James Gunn fired as ‘Guardians of the Galaxy 3’ director

Podcasts worth a listen on the go

admin - April 21, 2018
0
Former president George H W Bush paid respects to his wife with his daughter as her body lies in rep..

admin - April 12, 2018
0
For the past week, they marched with agonizing blisters and slept on gymnasium floors on their way t..