Scientists have found what they believe to be the strongest factor leading to the worryingly steep decline of bumblebees… fungicides.

The discovery has now been added to the growing list of threats that could potentially lead to the extinction of the essential pollinators. The revelation that common fungicides are having the strongest impact on the insects came as a surprise, as they typically affect mold and mildew, but appear to be killing bees by making them more susceptible to the nosema parasite or by exacerbating the toxicity of other pesticides.

The discovery was made during a landscape-scale study, published in the journal Proceedings of the Royal Society B, which used machine learning technology to analyze 24 different factors and how they impacted four bumblebee species.

The study collected ‘subjects’ from 284 sites across 40 US states and tested them against various factors like latitude, elevation, habitat type and damage, human population and pesticide use.

For context, about 75 percent of the world’s crops are fertilized by pollinators. The widespread decline of bees has been attributed to a number of factors including pesticides, destruction of their habitats, disease and climate change, but until now it was unclear which was the most decisive factor.

The unexpected culprit behind bee decline means “people have not been looking in all the places they probably should,” according to lead author of the study, Cornell University’s Scott McArt.

“We threw everything but the kitchen sink at this analysis and the ‘winner’ was fungicides,” McArt said to UMass. “It turns out that fungicide use is the best predictor of bumblebees getting sick and being lost from sites across the U.S.” 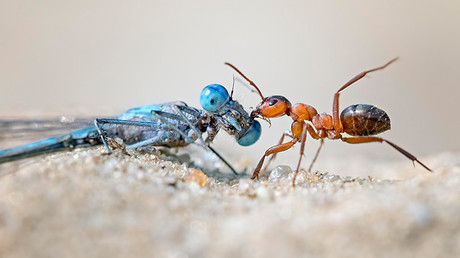 “I was definitely surprised,” said McArt, to The Guardian, as “fungicides have been largely overlooked,” until now. Going forward, McArt says researchers will have to carry out “much more work on fungicides and their role in bee declines” if humanity is to make any progress in regenerating the dying species.

Common systemic pesticide sprays are used worldwide to manage landscapes, and are often found in nectar and pollen. Another recent study, published in same journal, found chemicals are causing severe nutritional stress on honey bees, affecting their survival rates by a whopping 50 percent.

The Canadian government recently failed to protect bees after rejecting a plea by environmentalists to completely ban the use of insecticides, instead opting to continue their use of neonicotinoids, promising to consider limiting the use of pesticides by March 2018.

Has Kim caved in to Teflon Don’s aggression?

This might be the most bizarre story youll hear all day...