This brings us to the spectacular event happening in our expanding 50th state. For the last few weeks — as you are by now well aware — residents of Hawaii have been witnessing new land being emplaced, acres and acres of it, altering the Big Island's geography permanently. Stepping for the first time over land that didn't exist until the previous day represents that most singularly American endeavor — forging into a frontier, a brand new one! Exciting as this prospect is, having to live next to an active volcano to experience it entails the kind of risk many other Americans would happily live without, particularly since there is no such thing as volcano insurance to help residents when the risk turns into reality. In this sense, people living on the Big Island are a special breed — many have faced eruptions before, yet they stayed and learned to coexist with their volcanoes.Here is what they have been dealing with:Kilauea, one of the five volcanoes of the Big Island of Hawaii, has been erupting almost continuously since 1983, righteously earning the title of most active volcano on Earth. Its activity typically consists of lava flows, partially molten rock that gently oozes out of a fissure in the ground and slowly moves downhill. That is certainly one of the main attractions of Hawaii, with an average of almost 2 million tourists drawn to Hawaii Volcanoes National Park every year to admire the incandescent lava. 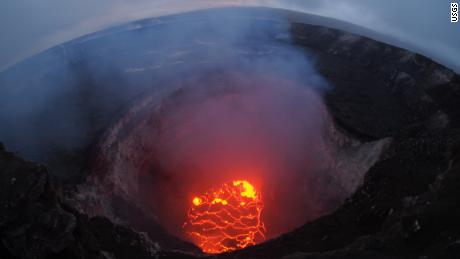 As lava flow piles upon lava flow, the Big Island grows taller and wider. The territory of Hawaii increased by about 500 acres over the past 35 years — the volcano created pristine new land and pushed the coastline forward. The best part is that this process is relatively safe to observe: lava flows can easily be outwalked, and they give out enough heat to keep even the most daring tourists at a secure distance.The most recent eruption of Kilauea, which started at the beginning of May, is that and more. In addition to the effusive activity (i.e. the lava flows) localized at the East Rift Zone, some explosive activity is taking place miles away, at the summit. There is where there used to be Halemaumau lava lake, one of only a few persistent active lava lakes known on Earth. But since the beginning of the eruption, its level has been dropping, and it has now drained completely. Perhaps counterintuitively, this poses an additional danger: the walls of the crater now stand around an empty cavity instead of being supported by the lava lake, which makes them unstable. Rockfalls are frequent, and they trigger explosions that can spew ash over 10,000 feet above sea level, in addition to ejecting volcanic bombs (rock blocks bigger — sometimes a lot bigger — than 2.5 inches) all around the crater. These explosive episodes are more dangerous and unpredictable than lava flows, which is why the National Park is currently partially closed.

This eruption has drawn a lot of media attention, as it is perceived to be highly unusual for Hawaii because of its explosive component. Indeed, people living in Hawaii may not remember one like this over their lifetime, but Kilauea has behaved this way before. For example, between 1500 and 1800, Kilauea was not the effusive volcano we know today, but rather had frequent explosive eruptions, as ash deposits found tens of miles from the crater prove.The key to understanding why the volcano activity switches from effusive to explosive over time is monitoring the relative levels of the magma and the water table. If the magma level drops too much, groundwater can seep into the hot crater. If this happens, water instantaneously turns to steam, causing a violent explosion — what volcanologists call a phreatic eruption. Even in recent history, such explosive events have punctuated the activity of Kilauea. In 1924, the lava lake drained, much like these days. Rockfall-triggered explosions occurred for weeks and months, and eventually groundwater took the place of lava inside the hot crater, triggering a phreatic explosion that killed at least one person. Is this where the current eruption is headed next? We cannot tell yet, but if it was, it would not be completely out of character for Kilauea, and — most importantly — we would be prepared. The area has been declared off-limits, and the US Geological Survey is taking advantage of modern technology to update residents and tourists on the most recent activity developments. The ash column rising from the summit crater of Kilauea can still be safely observed from a distance. While it is part of the normal activity of the volcano, the ongoing Kilauea show happening right now has made it a sight that longtime residents and tourists will be talking about for a long time.

Not To Be Outdone By ‘Rocket Man,’ Trump Reportedly Wants His Own Military Parade

Political radicals dont evaluate their own errors—about anything

US Blaming Iran For Bombings In Gulf Of Oman