With 98% of the vote counted by Monday, the coalition led by Orban's ruling party, Fidesz, was projected to win 133 seats out of the 199 seats in Parliament, according to the country's National Election Office. The result would grant Orban's government a "supermajority," giving it the power to amend the constitution.The Fidesz-led coalition took 49% of the national list votes, trouncing the liberal opposition, which had failed to put up a united front.Orban, who won his fourth term on a virulently anti-immigration platform, was already Hungary's longest-serving leader since the fall of communism in 1989. He has transformed Fidesz beyond recognition: formed as a liberal party in the 1980s, it is now a firmly right-wing nationalist movement.Buoyed by a strong economy, Orban was always expected to win, but the strong backing for his euroskeptic and anti-immigration platofrm represents a headache for the European Union.The Organization for Economic Cooperation and Security in Europe issued a highly critical statement of the election campaign Monday, singling out "a pervasive overlap between state and ruling party resources, undermining contestants' ability to compete on an equal basis" as well as "intimidating and xenophobic rhetoric, media bias and opaque campaign financing."That "constricted the space for genuine political debate, hindering voters' ability to make a fully informed choice," the OSCE said. Right-wing leaders in Europe were quick to congratulate Orban. Poland's Prime Minister Mateusz Morawiecki, Hungary's closest ally in the EU, tweeted: "The road to reform is never easy," adding that "the support of the majority of society shows that it's worth making the effort." French far-right politician Marine Le Pen, described the result on Twitter as a "great and clear victory" and said that "nationalists could soon be in the majority in Europe."The Jobbik party, a far-right group that has tried to tame its image over recent years and rebrand itself as an anti-corruption force, came a distant second. It received 19.2% of the votes, the National Election Office said. The party's disappointing performance prompted party president Gabor Vona to announce his resignation. 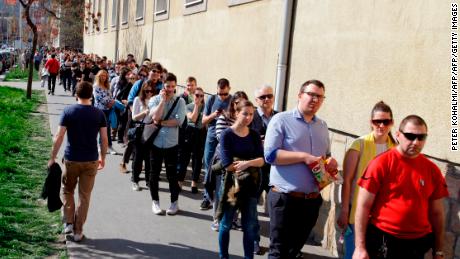 Fidesz, in a coalition with the smaller Christian Democratic People's Party, has held a two-thirds supermajority in Parliament for the past eight years, allowing it to change the constitution without a referendum.The coalition has passed a slew of laws tightening regulations on the media, central bank, constitutional court and nongovernmental organizations. European Union leaders have warned those laws would undermine the country's democracy. State media in Hungary is widely supportive of Oban and opposition voices were sidelined in the runup to Sunday's election.The Organization for Security and Cooperation in Europe will present a report on the election at 3 p.m. local time that is expected to be critical of aspects of the election. 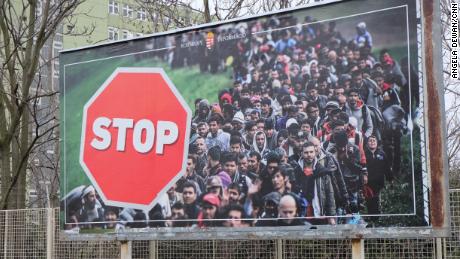 Orban is a critic of the European Commission — the executive arm of the EU — despite Hungary's status as one of the largest recipients of EU development funds. Orban has accused the Commission of overreach in Hungary's affairs, particularly in its attempt to impose a quota system that would have obliged Hungary to settle refugees.The Hungarian governmenthas set up anti-immigration billboards across the country, though it has the third-lowest level of immigration of the EU's 28 countries.Orban has sought to portray himself as a defender of Christian Europe against Islamic immigration. He has also railed against what he refers to as meddlesome international institutions, such as the United Nations and NGOs. Fidesz also ran an aggressive campaign against the Hungarian-born Jewish financier and philanthropist George Soros, accusing him of plotting to take control of the country. The anti-Soros rhetoric came against a wider backdrop of antisemitism in Hungary.

Hundreds of separated children not reunited by court-ordered deadline

Life Is Strange 2 starts this September – will be five...