Im perched on a tree and the world is quiet as Im overlooking a gorgeous Medieval Japanese compound. I see a prompt to pull the left trigger on a nearby fortification.

Just like that, my Shinobi character unleashes his grappling hook and is pulled toward it with grace. My eyes light up. Is this Dark Souls… with fluid mobility?

The short demo of Sekiro I played at Gamescom was jam-packed with surprises. Firstly, the DNA of this From Software game is nothing like its predecessors. Crucially, stealth is a genuine option, something missing from previous titles.

Sneaking around on rooftops, hugging walls and toying with your target before plunging your sword into their neck is fully viable and encouraged, and I found myself using the Shinobi Deathblow more often every time I kicked the bucket. This is an instant kill attack that is available when you sneak up on a foe or break their posture, which is a new mechanic that warps the combat in a clever way.

You are forced to think about each attack instead of going in guns blazing, as the point is to stagger a foe to leave them praying on their knees and open to a deathblow. Parrying removes enemy posture, so if youre not used to it you are going to feel like youre fighting a brick wall.

Whilst I made mincemeat of the smaller grunts the Samurai General I fought had his feet firmly clamped on the ground and was not moving. This meant I had to be smart about my attacks and lean into the fight instead of running a way.

A new strafing mechanic lets you run around an enemy whilst locked on, finding new opportunities to attack which I found incredibly useful. Just like the player character, enemies can resurrect too, meaning their health bar just refills once youve depleted it, making the fights seem a little more impossible.

Oh yeah, did I mention that this game is hard as nails? No conjecture, I found my time with Sekiro to be far more punishing than Bloodborne, which many contest is the toughest of the series. I died way more than I would like to admit, and as the title suggests, you have the option to resurrect every now and again.

Whilst I didnt exactly figure out what the parameters were that let you come back to life, I noticed it was an option when I fought more valiantly than useful and died in an honourable fashion. Otherwise, when I fell to my doom attempting to platform through the world or got caught off guard, the game wasnt as kind.

Platforming is another huge change to the formula. Your character can leap, climb and grappling hook through the environment. In my demo, this involved scaling the side of a mountain and making a leap of faith every so often to reach the next setting. 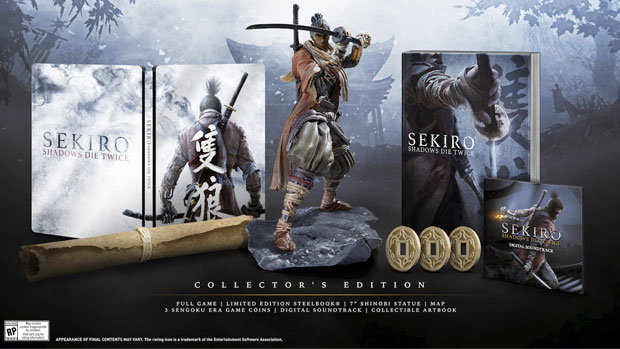 Handholds are sparse, and I feel like players are going to spend a lot of time dying to the environment as well as the enemies in Sekiro.

Pseudo-bonfires appear known as Sculptors Idols, the sculptor supposedly being the man who created your Shinobi Prosthetic, your secondary weapon mapped to your Right Trigger. This includes a Bloodborne-esque Switch Axe, Shuriken and a Flamethrower that can be used when youre in a bind.

Environmental storytelling and level design was the final meaningful way I found that From Software had changed the formula for Sekiro. You can find notes tagged to trees that warn you away from cave systems that have horrible, headless bosses at the end.

The one I found was seriously gruesome and filled the floor with fog that slows the player. The other available avenue led me to a huge white snake that popped out of the wall. Whilst I got one slash in it immediately whipped me into the ravine, ending my demo in style and showing me just how much I needed to practice before Sekiro drops in March 2019. Gamescom Preview by Jordan Oloman

Ahead of the public getting hands-on with the game at Gamescom 2018, Activision has revealed more gameplay details about Sekiro: Shadows Die Twice.

New information has informed us that the prosthetic tools belonging to the “one-armed wolf” protagonist can be reconstructed to unlock new actions such as powerful charge attacks. These attacks allow the player to broaden their approach to defeat their foes.

A rundown from Activision has detailed some more mechanics in the game, too. These are:

“We cant wait for fans to finally get their hands on Sekiro: Shadows Die Twice,” said Steve Young, Chief Revenue Officer at Activision. “Fans will get a taste of the multiple tools available for the prosthetic shinobi arm this week at Gamescom, and will be able to fully dive into the brutal, dark world of 1500s Sengoku Japan when the game launches on 22 March 2019.”

You can read more about the game's release date below.

The game's release date was revealed at Gamescom 2018, after From Software and Activision had kept fans in the dark about the game's launch window since E3 2018.

As well as a release date, the Gamescom announcement came with the reveal of a Collector's Edition – here's what it'll contain:

Sekiro: Shadows Die Twice – What is it?

Sekiro: Shadows Die Twice is the next game from the esteemed studio behind the Dark Souls and Bloodborne games – From Software.

This game seems to be moving away from the super hardcore setup of the aforementioned action-RPGs and will instead lean more into being a more traditional action game.

Director Hidetaka Miyazaki – the director behind the highly esteemed Dark Souls and Bloodborne games – has noted that the feudal Japanese setting of the game and the different setup of the title has been a challenge to develop. However, he relishes the opportunity to do something different.

It promises to have a more understandable and clear narrative than the Souls games.

This title will be published by Activision – a first for From Software. You can read everything we know about the game so far in the article below.

This will be the first game from From Software to be published by Western publisher Activision. This prospect has made some hardcore fans of the studio nervous, but director Hidetaka Miyazaki remains unconcerned.

“Collaborating with Activision on Sekiro: Shadows Die Twice has been a very exciting experience for us,” Miyazaki noted in a press release.

“With Sekiro: Shadows Die Twice many FromSoftware team members, including myself, are thrilled to be exploring themes of Sengoku Japan and ninja for the first time. We cant wait for everyone to discover whats in store for the game.”

Sekiro draws inspiration from the Tenchu series of stealth-action games that were partially developed and published by FromSoftware – but reinvents them for a new era.

In the latest issue of Edge (September 2018, Issue 322) Sekiro director Hidetaka Miyazaki has reassured fans that From Software won't be compromising on the developer's usual – and famously challenging – sensibilities.

“Were not consciously trying to make a game thats oriented towards a certain subset of users,” Miyazaki told Edge. “Were making games for people that love games.”

The interview also delved into how Tenchu – a series currently owned by From Software and once owned by Activision – played a significant part in the conception of Sekiro, especially with regards to the games stealth mechanics.

“When we first started discussing what this project would be, we decided we wanted to make a game with a Japanese setting,” said Miyazaki.

“From that stemmed the discussion of ninja. This, of course, spurred discussion of Tenchu, which is a title both From and Activision have a history with. From these ideas – Tenchu, Japan, and ninja – come these light stealth mechanics [in Sekiro].

"They just naturally weave themselves into the design.”

Could a tree help find a decaying corpse nearby?

Ben Stiller and a talented cast can’t save comedy about middle-aged...

Here are the nine biggest new game reveals from E3 2018

admin - December 17, 2018
0
Kingdom Hearts III – beware of the spoilers Its not out for a month yet and yet somehow copies of t..