The civil complaint, filed in state superior court, alleges the Southern California Edison Company was responsible for causing the Thomas Fire that burned a state record 281,893 acres in Santa Barbara and Ventura counties.It also says the Montecito Water District Financing Corporation was responsible in part for the heavy damage caused by the mudslides because a pipe broke, allowing 9 million of gallons of water to combine with rainwater to produce mudflows that left at least 20 people dead.State officials say the cause of the Thomas Fire is unknown and is still under investigation. David Clark, Cal Fire spokesman, says the mudslide was the result of a significant amount of rain on January 9. The Thomas Fire, which was just recently contained, began December 4 in the hills of the town of Santa Paula. The suit says two transformers owned by the power company — located about 6 miles apart — either caught fire or exploded and ignited the brush. The complaint also says Edison failed to trim or remove trees when needed. "Had SCE acted responsibly, the Thomas Fire could have been prevented," the lawsuit says, adding that the fire "left these areas susceptible to excessive runoff, erosion mud and debris flows."Southern California Edison said the mudslides were tragic and it was focusing on helping emergency workers during recovery efforts. Three people are still missing. 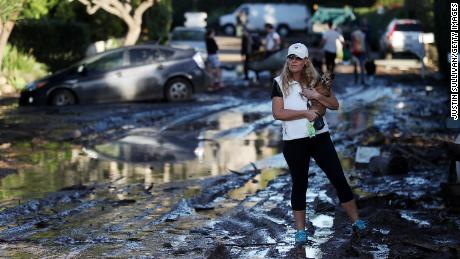 "In regards to the potential causes of the Thomas Fire, we understand that Cal Fire's investigation is ongoing, and it would be premature for SCE to speculate about potential litigation associated with the recent mudslides," the company said in a statement.The three residents and one business suing are seeking damages that would be determined at a jury trial. The plaintiffs say they suffered injuries in the mudslides on January 9. The lawsuit was filed January 12 and amended Tuesday.Montecito Water District didn't immediately respond to CNN's request for comment.

‘The Comey Rule’ shows off a sensational cast in a slightly...

Brazil’s indigenous leader Raoni is in ‘stable’ condition in hospital