But by week's end, one of the prosecution's own witnesses dropped a bombshell, testifying that he was the one responsible for the ISIS fighter's death, not Chief Petty Officer Eddie Gallagher. It was an extraordinary twist in the court-martial's opening days, but just one of many revelations. Other witnesses testified that during their deployment to the Iraqi city of Mosul in 2017, they saw Gallagher not only stab the young ISIS prisoner, but fire at non-combatants, including a young girl estimated to be between 12 and 14. "The thing floating over our heads," one SEAL testified, "was that our chief was killing civilians."Gallagher stands accused of multiple violations of military law, including murdering a prisoner, posing for a photo next to a corpse, shooting at non-combatants and intimidating SEALs who might report his behavior. Gallagher has pleaded not guilty. If convicted of murder, he faces life in prison. The case has caught the eye of President Donald Trump, who has expressed sympathy for Gallagher on Twitter and is reportedly mulling a pardon for the SEAL. Gallagher's defense attorney, Tim Parlatore, told the jury of seven men in his opening statement Tuesday that there was no credible physical evidence for the murder charge against his client. The witnesses, Parlatore said, all had "an admitted hatred towards Eddie." He echoed those remarks later in the week, saying "the younger millennial SEALs" were targeting Gallagher because he was "old school." "This case is not about murder," he said Tuesday. "It's about mutiny."

'It's just an ISIS dirtbag'

Prosecutors began calling witnesses Tuesday afternoon, starting with Officer Thomas MacNeil, a SEAL who served alongside Gallagher. Under immunity, MacNeil told he court he posed in a group photo with the body of the ISIS fighter Gallagher is accused of killing, but that he didn't know the circumstances of the prisoner's death at the time. Later, Gallagher ordered anyone who had the photos to delete them, MacNeil said. Gallagher also got in his face and yelled, "If you take me down, I'll take all of you down." Navy SEAL Special Operations Chief Craig Miller testified Wednesday that he saw Gallagher stab the ISIS prisoner "on the right side of his neck, toward the jugular vein." Miller — who admitted to posing in a group photo with the body — said he immediately reported the murder to his superior. Miller testified that Gallagher asked him, "Who's not good with it?" Miller said he told Gallagher that he was not.Former Navy SEAL Dylan Dille testified he saw Gallagher pose for individual and group photos with the body of the prisoner, who he described as a frail, weak and injured 12-year-old. Dille said Gallagher later told him and the others, "I know you're not alright with what happened, but it's just an ISIS dirtbag. Next time if I get a prisoner, I'll do this where you can't see what happens."

Dille also told the court that Gallagher shot at civilians who were not military targets. During one such incident — in which he, Gallagher and others were on sniper duty — the SEALs saw two elderly men standing on a corner. Dille testified that he heard a rifle shot and that one man was hit, struggled and got away. Dille saw a vapor trail from Gallagher's position, Dille said, and heard Gallagher say over the radio, "Oh, I thought I missed." Gallagher also shot near two women wearing hijabs, Dille said, causing them to run. The former SEAL conceded on cross-examination that he did not see Gallagher pull the trigger. He based his accusations on the vapor trail he saw emanating from Gallagher's position, he said. Later in the week, Dille's testimony appeared to be corroborated by two more witnesses. 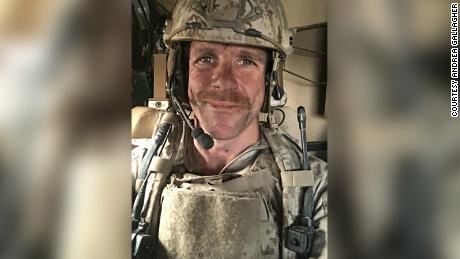 One of them, Dalton Tolbert, said he fired a warning shot at an old man during a sniper mission with Gallagher. As the old man ran away, Tolbert testified Friday, another sniper fired and the man fell. He heard a voice that sounded like Gallagher's say via the radio, "You guys missed but I got him," Tolbert said. Like Dille, Tolbert said during cross he did not see Gallagher fire the shot. He was also confronted by defense attorneys about messages he sent in a group chat with other SEALs shortly before the trial started, two of which said, "Somebody fire this p***y a** f*****g judge" and "This legal process is a joke."Tolbert said those text messages were written out of frustration.Another witness, Joshua Vriens, testified he heard shots fired from Gallagher's position during another sniper mission. Vriens said he saw four girls between 12 and 14 years old through the scope of his rifle. Following the shot, Vriens said one of the girls clutched her stomach and fell down. Like the others, Vriens said he did not see Gallagher fire the shot.

But the undeniable highlight of the trial's first week came Thursday, when one witness turned the case on its head, claiming he was the one who killed the ISIS prisoner in question. SpeciaRead More – Source

The Trump administration just lent $700 million to a trucking company...

One killed, two shot in Illinois before police engage in standoff...

admin - April 11, 2018
0
Antifa, rather than white supremacists, posed “the greatest threat to public safety” at a Republican..