Speaking just days after members of the United Nations condemned US President Donald Trump's move to recognize Jerusalem as the capital of Israel, the Pope prayed for the "peaceful coexistence of two states within mutually agreed and internationally recognized borders.""We see Jesus in the children of the Middle East who continue to suffer because of growing tensions between Israelis and Palestinians," Francis said in his "Urbi et Orbi" message Monday. "Urbi et Orbi" is Latin for "to the city (Rome) and to the world.""On this festive day, let us ask the Lord for peace for Jerusalem and for all the Holy Land. Let us pray that the will to resume dialogue may prevail between the parties and that a negotiated solution can finally be reached."May the Lord also sustain the efforts of all those in the international community inspired by good will to help that afflicted land to find, despite grave obstacles, the harmony, justice and security that it has long awaited."The Pope also urged followers to pray for peace in Syria and Iraq while highlighting the struggles of the children of Yemen, an ongoing conflict "that has largely been forgotten," he said.

On Sunday, the Pope issued a strong defense of immigration in his Christmas Eve mass, saying faith demands foreigners be welcomed, even as support for far-right parties has risen in Europe. Mary and Joseph, he said, were immigrants, who struggled to find a safe place to stay in Bethlehem. "They had to leave their people, their home and their land," Francis told an audience at St. Peter's Basilica in the Vatican. "This was no comfortable or easy journey for a young couple about to have a child. … At heart, they were full of hope and expectation because of the child about to be born; yet their steps were weighed down by the uncertainties and dangers that attend those who have to leave their home behind."

The Argentinian son of an Italian immigrant, Francis often has spoken out on behalf of immigrants and those forced to leave their homes. He is the first Pope to be a member of the Jesuits, an order present in every continent that is active in advocating for refugees. "So many other footsteps are hidden in the footsteps of Joseph and Mary," Francis said Sunday. "We see the tracks of entire families forced to set out in our own day. We see the tracks of millions of persons who do not choose to go away, but driven from their land, leave behind their dear ones."More than 160,000 people have risked their lives crossing the Mediterranean this year alone, with at least 3,000 having drowned in the process, according to the United Nations. Many of those crossing the Mediterranean are fleeing conflict-ridden parts of the Middle East and North Africa. But an increase in the number of those attempting to reach the safety of Europe has been met with a rise in anti-immigration rhetoric and support for far-right political parties. Rather than react to migration and those seeking refuge with hostility, Francis said, people should work to create a "new social imagination … in which none have to feel that there is no room for them on this earth." While some far-right parties in Europe have made Christian identity part of their platforms, often in opposition to Muslim immigrants or refugees, Francis said respect for migration is an integral part of Christianity, as the faithful's "document of citizenship" comes from God, not any specific country. "True power and authentic freedom are shown in honoring and assisting the weak and the frail," he said. "This is the joy that we tonight are called to share, to celebrate and to proclaim. The joy with which God, in his infinite mercy, has embraced us pagans, sinners and foreigners, and demands that we do the same."

While he has been outspoken in defense of immigration and refugees in Europe, Francis came in for criticism for not taking an equally forceful line during a recent trip to Myanmar, the first ever by a Pope. Tens of thousands of members of the Rohingya Muslim minority have fled the country amid a brutal military crackdown. While he was in Myanmar, Francis did not use the term "Rohingya," which is politically sensitive but widely accepted outside the country. The Vatican defended that decision on the grounds that using the term would be needlessly divisive while Francis was in Myanmar to improve diplomatic relations with the predominantly Buddhist country. During a service in Bangladesh, where the majority of the refugees have fled, the Pope did use the term, saying the "presence of God today is also called Rohingya." 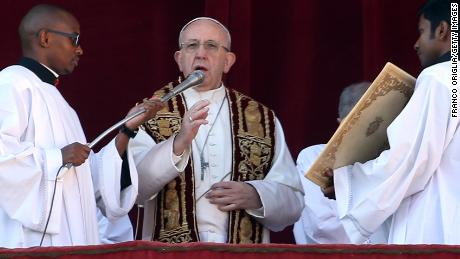 He used his speech on Christmas Day to urge the world to "protect minority groups" in Myanmar but did not use the word "Rohingya.""I see Jesus again in the children I met during my recent visit to Myanmar and Bangladesh, and it is my hope that the international community will not cease to work to ensure that the dignity of the minority groups present in the region is adequately protected," the Pope said.

CNN's Nicola Ruotolo in Rome contributed to this report.

admin - September 13, 2019
0
Borderlands 3 – I think I need a bigger gun How does Borderlands 3 handle loot and what endgame con..

Check your fridge and garage for all these things recalled this...