Fujimori was serving a 25-year prison sentence for human rights abuses when the current President pardoned him Sunday, citing Fujimori's failing health. "The news of the humanitarian pardon granted by President Pedro Pablo Kuczynski surprised me at this intensive care unit," the 79-year-old Fujimori said in a video posted on his Facebook page. "I am aware that the results during my government on one side were well received, but I recognize that I have also disappointed others, and I ask them to forgive me with all my heart."Outrage over Fujimori's pardon led to two nights of heated protests in Lima. On Monday, hundreds of angry Peruvians packed streets. Outside Fujimori's hospital, some chanted "traitor" and "the pardon has got to go." Protesters and police clashed, and authorities threw tear gas canisters at the crowd.

The son of Japanese immigrants, Fujimori served as Peru's leader from 1990 to 2000. He is credited with defeating the Shining Path terrorists who destabilized the country, and his austere economic policies reined in hyperinflation.But the former president had an authoritarian streak and used security forces to crack down on opponents. 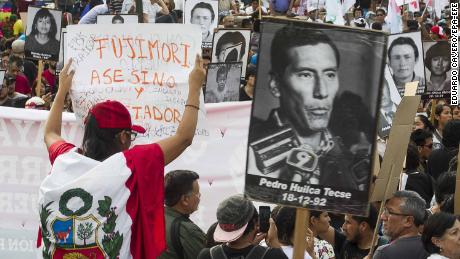 In 2009, a special supreme court tribunal sentenced the former president to 25 years in prison for authorizing a death squad responsible for killing civilians. That included "his role in the extrajudicial execution of 15 people in the Barrios Altos district of Lima, the enforced disappearance and murder of nine students and a teacher from La Cantuta University, and two abductions," Human Rights Watch said in July.In addition, Fujimori was found guilty in separate trials of breaking into the home of a former spy chief to steal incriminating videos, taking money from the government treasury to pay the spy chief and authorizing illegal wiretaps and bribing congressmen and journalists.The ex-leader now "suffers from a progressive, degenerative and incurable disease," according to a statement from Kuczynski's office.In his hospital room video, Fujimori said his prison release opens a new chapter in his life. "I have to express my deep gratitude for the complex decision that the President has taken, in which I have to commit during this new stage of my life to strongly support his call for reconciliation," Fujimori said. "Thank you very much, President Kuczynski, for this magnanimous gesture that has comforted me. From this place, I join the hopes of all those who fought for the greatness of the country. Because for Peruvians, Peru comes first."

News of the pardon led several members of Kuczynski's own party to resign. Congressman Gino Costa posted on Facebook that he agreed with the "prerogative of the president to grant a humanitarian pardon," but added, "I don't support the way in which it was done. I regret to inform that in the next few days I will formalize my resignation from the Peruvians for Change party." 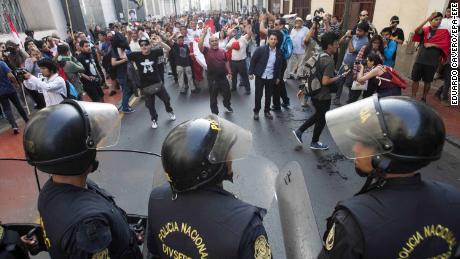 Congressmen Vicente Zeballos and Alberto de Belaunde made similar announcements via social media.On Monday, Kuczynski defended his decision to grant the pardon through an announcement broadcast on state TV. He called the move a "complex and difficult one." Kuczynski's pardon of Fujimori came less than a week after the current president survived an impeachment hearing stemming from a corruption scandal that swept Latin America. Fujimori's son, Kenji Fujimori, was among several lawmakers who abstained from last week's vote to remove Kuczynski from office. Kuczynski survived, in part, because a total of 10 lawmakers from Kenji Fujimori's party abstained, breaking ranks with their own leadership. Members of the party, Popular Force, are known as "Fujimoristas" because of their support of the former president. Local media reports chronicled how the split vote caused friction within the group, including a party spokesman who alleged that those who abstained did so as part as a pact with Kuczynski to pardon Fujimori.Jose Miguel Vivanco, executive director for the Americas Division of Human Rights Watch, denounced the pardon and also alluded to a pact. "Instead of reaffirming that in a state with rule of law there is no room for special treatment for anyone, the thought that will persist forever is that his freedom was a crude political negotiation in exchange for (Kuczynski) to remain in power," Vivanco tweeted.

admin - November 29, 2018
0
Romaine harvested outside these six California regions is not related to the current outbreak, accor..

‘We were in that first wave of creative diarrhea’ — Chris...

admin - December 15, 2018
0
Harvey Weinstein bragged about sleeping with Jennifer Lawrence while trying to force himself upon a ..