Officials in Florida believe residents could be without power for as long as two months as public utilities hurry to restore electricity to areas slammed by Hurricane Michael.

Lynn Haven Mayor Margo Anderson told citizens they should prepare to live primitively for the next two months, or at least until after Thanksgiving. Some utilities in the area are suggesting that number might be a bit overblown.

Some 371,000 customers are still without electricity in parts of Florida, Georgia, North Carolina and Virginia, according to the Edison Electric Institute. More than 2.3 million customers in the affected areas have had their power restored.

Gulf Power, the main utility in the area, meanwhile estimated Sunday that electricity would be restored in Andersons town by Oct. 24. Duke Energy is less certain about a time frame – the company is not yet able to estimate how long it might take to get the lights back on in portions of the panhandle, which took the brunt of Michaels fury on Oct. 10.

LaRue Rogers (center), of Lynn Haven, reunites with a friend while helping to distribute bottled water in the aftermath of Hurricane Michael in Lynn Haven, Florida, U.S., October 14, 2018. REUTERS/Terray Sylvester

“Its almost like a huge bulldozer went down the middle of Panama City and straight up through,” Jeff Rogers, a Gulf Power spokesman, said in a statement shortly after Andersons walkabout. “This is kind of the Super Bowl of all big storms.”

A large, complicated mission to locate and rescue missing people is still underway in Florida, Georgia, and parts of Virginia. 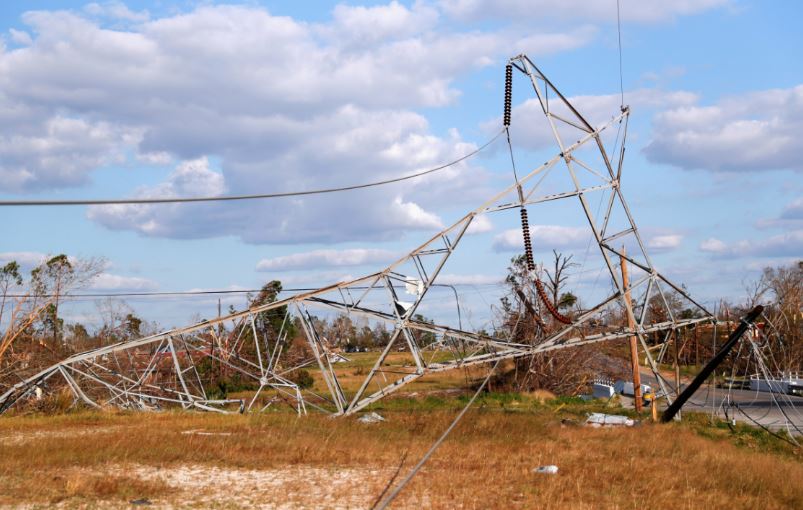 An electrical tower lies on its side in the aftermath of Hurricane Michael in Springfield, Florida, U.S., October 14, 2018. REUTERS/Terray Sylvester

Emergency officials say they have received thousands of phone calls and messages asking about missing people in the area, the Miami Herald reported Saturday night. Downed cell phone service and destroyed infrastructure makes it difficult to determine who among the missing is safe.

Volunteers consisting of firefighters and other emergency crew found more than 520 people who had been reported missing, Matthew Marchetti, the co-founder of CrowdSource Rescue, told Reuters Saturday. Michael made its way to portions of Georgia and South Carolina after initial slamming Mexico Beach and Panama City. At least 19 people have been killed.

US snowstorm leaves three dead and homes without power

Fallout 76 DOWN: Server Status latest for PS4, Xbox and PC...

‘G6 plus one’ warns US over ‘disappointing’ tariffs

Kaine says US troops killed in Niger were on unauthorized mission

admin - May 11, 2018
0
Kaine, who sits on the Senate Armed Services Committee and the Foreign Relations Committee, told CNN..